Please don’t tell anyone, early in the week I watched an episode of Basketball Wives, the entire episode was based on a rumor.  Two of the wives being catty said they heard one about one of the two new characters having sex (yes they were suggesting she was a HO!) with various men to help build her business as a nurse.   There wasn’t any depth of any kind and I could just hear the producers telling cast members to perpetuate this story and hopefully there will be a fight, where glasses and bottles are thrown and security would be called to separate the screaming and kicking women off each other.   Big yawn…..

In New York there is trouble brewing.  Close friends Bethenny Frankel and Carole Radziwill’s  friendship is cracked.  Unlike Basketball Wives, this story isn’t contrived. No producer has to whisper in the cast mates ear hoping for something to happen.

Sonja Morgan is downsizing, with her Townhouse on the market.  Early last night we learned Sonja Tremont Morgan doesn’t sleep with two men in a 24 hour period.  She believes IF you sleep with two different guys in a 24 hour period ” Their  sperm will have a war inside your vagina’ BECAUSE they (the sperm) are allergic to each other.   Now ladies and germs I could spend at least another three a four minutes on this but your probably……… 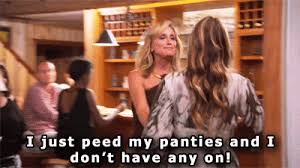 Its Christmas time, that means its “Blue Stone Manor” Dorinda’s home in the Berkshires.

I’m not sure if its has to do with holiday stress but Blue Stone, has been the site of epic New York Housewives melt downs usually starring Bethenny Frankel.    At Blue Stone, Dorinda spares no expense for her decorations and friends

First to arrive to the  Blue Stone Manor was Ramona and Carole.  At dinner Carole talked about she hadn’t seen much of Bethenny and felt a disconnect with her and that Bethenny was aggressive with her.

Bethenny was the next to arrive and Carole greeted her. Carole wants to have a conversation.  Bethenny is pretending like everything is fine but she telling everyone else it isn’t!

Luann, Tinsley and Sonja all arrived together.  With everyone in the manor.    Dorinda (Lady M) sets down some ground rules at the manor.    She ain’t about the shit that went down last year.       She tell them Len, her housekeeper works for her. Len ain’t nobodys maid so if yall want something go and get it.!    This year, Ramona wont damage her room in a drunken stupor!  This year, Sonja wont go through her things and put on a new set of pajames given Dorinda by her late husband !

When Sonja gets to her room, she take pictures of existing damage in her room before she settles in.    Lady M is a bonafied East Side Gangsta and she might cut a bitch!

Dorinda is having a silly azz 1920’s  murder mystery party.  She’s hired three men to play roles in the party.   Everyone was in costume and were giving roles, which closely resembles who they are in real life.   The ladies were taking their roles seriously but after a while Dorinda said she was hungry and told everyone she was the murderer.   Game ovah, Let’s EAT!

Ramona opened her mouth and Bethenny pounced.  Bethenny called Ramona out for lying about calling Carole a puppet.    Ramona admitted the Bethenny, that she didn’t USE THE WORD PUPPET!

Lady M (Dorinda) asked if there was tension between Carole and Bethenny.  Bethenny said SHE didn’t feel tense ” Our vibe is different; there is a shift and everyone feels the shift .  She told Carole, “I don’t have a problem with you”  We will talk about it later.  This is so personal, so intense, the two should have gone somewhere quietly to hash it out.

Now that’s how it should have went!

But Lady M, insisted that they talk about it now in front of all the other women.

Carole brings up what she just learned about the Adam drama.  ” I heard you were upset

your charity.  Bethenny denied reaching out to Adam.  Carole said when she spoke to

Adam, ” he actually wanted to do the photos”

Bethenny said, Carole was freaking her out.    Carole: “Does the truth freak you out?”

Bethenny picked over every word for accuracy   Sunday, not Monday  7:15 not 7.

“It doesn’t matter if it was a Saturday or a Sunday or a goddamn Tuesday,”  Carole

screamed at Bethenny, adding: “I’m just trying to understand why this happened and

how it has affected our friendship.”

The other ladies were uncomfortable, as if mom and dad was having a big fight in front

of them.    Of all the women, I have never viewed Carole as an aggressor. Its probably

because unlike the other women, she doesn’t shout and scream.

Bethenny is hyper aggressive, talking over and screaming over the other person.

Perhaps its Carole’s professional background working in Television.   Carole is smart, she

doesn’t need to scream and she took Bethenny down.   Embarrassed as some of the women were, I think Luann, Sonja and Ramona,victims of Bethenny’s rage was happy to witnes the take down at the Blue Stone Manor.

Sometimes the issue isn’t the issue.   Bethenny and Carole was thick as thives.  Throughout the summer to two were always together.  Bethenny had a show on Radio Andy’s Sirrus XM. She talked about Carole accompanying her on Bethenny’s business trip.   Some where there was a break.   I believe Bethenny’s hurt. To make matters worse,  Carole and Tinsley has grown close.

This isn’t over, Bethenny has shared secrets. Told stores,  Next week is Carole’s turn.   From what I’ve read its gone dark.     See ya next week.

Hey, if you like what you see, feel free…

I mean, FEEL FREE TO SHARE WITH YOUR FRIENDS!!