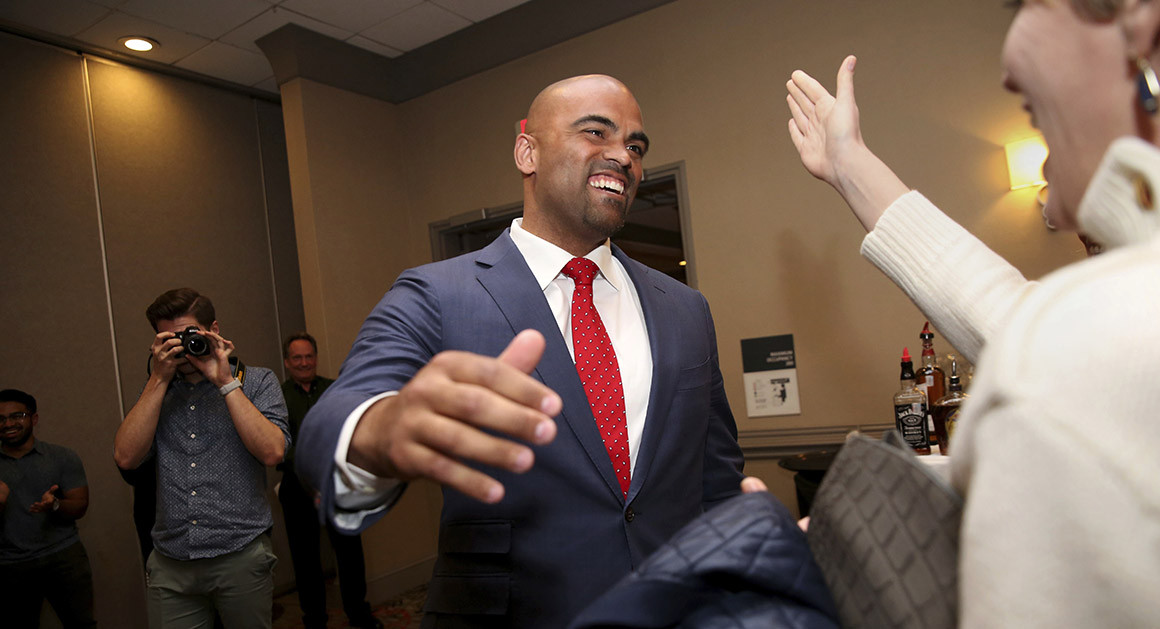 “People think millennials just tweet … and complain, but you all are living proof that that’s not true,” Allred said. “You are the best part of this party.”

Allred — the newly minted Democratic nominee for a competitive House seat here— is part of a swell of young Democratic House candidates hoping to inspire higher turnout among fellow millennials in the midterm elections, when youth voting rates typically decline. At least 20 millennial Democratic candidates are running in battleground districts, a leap over previous cycles that could remake the party’s generational divide.

“I don’t recall a cycle with anything close to this number of younger candidates in recent times,” said Ian Russell, a Democratic consultant who served as the deputy executive director of the Democratic Congressional Campaign Committee. “Notably, younger candidates who actually have a good shot at winning – raising money, running professional campaigns.”

Currently, the average age of a member of 115th Congress — nearly 58 years old in the House and nearly 62 years old in the Senate — is among the oldest of any Congress in recent history, according to a report by the Congressional Research Service. The youngest member of Congress, Rep. Elise Stefanik (R-N.Y.), will turn 34 in July.

Stefanik was first elected at age 30. No woman has ever been elected to Congress in her 20s, but two 20-something Democrats — Sara Jacobs in Southern California and Abby Finkenauer in eastern Iowa — are serious contenders running in competitive districts. Illinois’ Lauren Underwood, 31, and Ohio’s Aftab Pureval, 35, have already won primaries to take on sitting GOP incumbents this fall.

“In my almost-decade as a pollster, I’ve had almost no clients younger than me,” said Zac McCrary, a 37-year-old Democratic consultant. “Now I’ve got several this cycle.”

“Right now, the instinct is to look for the antithesis of [President] Donald Trump, and so Democratic primary voters are defaulting toward women, younger rather than older,” McCrary added. “And those young candidates are more difficult targets because they don’t have decades’ worth of opposition research racked up.”

“With youth, the advantage is not being a part of the traditional political system,” said Mike DeVanney, a Republican consultant based in Pennsylvania. “All of this points to unease that the current political officeholders are not getting the job done, and voters are looking for someone different who’s not part of the system and can bring new ideas to the table.”

While the candidates gladly tout the experience they do have — Allred’s path has already taken him from the Tennessee Titans to law school and the Obama administration — they say the last election taught them not to be afraid to take an early leap into the political arena.

“It’s a mistake for us to pretend that this is going to be a battle of resumes,” Allred said at his campaign headquarters last week, with his dog, Scarlet, snoozing nearby. “We saw in 2016 that that’s not the case. There’s much more to getting people inspired and elected than the number of years you’ve been in a certain job.”

In Texas, Allred’s youth and personal story appear to have made up for an initial lack of traditional campaign resources. Allred lagged behind his Democratic opponents in cash for a year and didn’t air a single TV ad before finishing ahead of them all in the first-round primary in March.

Allred — who blasted Drake’s “Started from the Bottom” in the car en route to his primary-night victory party — is a local high school football star who was raised by a single mom and made it to the pros before becoming a civil rights attorney. That makes him the “kind of candidate who has a compelling story that can meet the experience threshold” to defuse attacks on his credentials, said McCrary.

Indeed, Allred’s story reminded some supporters of another upstart candidate who made an early leap for office: former President Barack Obama.

“I want anyone who brings that kind of understated cool back to the office,” said Lori Folz, a retired CPA who voted for Allred at a local library last week. Mary Reid-Douglas, a 37-year-old counselor who also voted early, said Allred’s youth meant he’d “help shake up the status quo.”

Allred went on to win 69 percent of the vote in the Democratic primary runoff against Lillian Salerno, another Obama administration veteran who attacked him as “unvetted and untested” in an interview with POLITICO before the runoff.

Like the rest of his Democratic millennial cohort, Allred faces an uphill battle in November. He and others are running in tough districts that haven’t elected Democrats in years; GOP Rep. Pete Sessions has served in Congress since the 1996 elections.

Millennial candidates often face opponents who question their readiness for Congress, accusing them of resume inflation and dredging up social media posts to drive the point home. Last year in Georgia, Jon Ossoff, now 31, watched as his college antics — footage of him dressed up as Han Solo — resurfaced in an attack ad during a closely watched special election. The spot accused him of “fighting against restrictions on keg parties” because he was “just a college kid.”

“Social media is an oppo researcher’s dream, and it creates an instant lasting record. If I was a millennial, I’d delete everything I said and did online. Jon Ossoff forgot to do that,” said Corry Bliss, executive director of Congressional Leadership Fund, the GOP super PAC that aired the ads against Ossoff. Bliss added: “You can be 30 and be a good, qualified candidate — but it just depends on what you did during those 30 years.”

Like Ossoff, Jacobs has already faced criticisms over resume inflation. The San Diego Union-Tribune reported that though Jacobs called herself a “policy maker” while she worked in the State Department during the Obama administration, her former supervisor said she “did not create policy.” Two of Jacobs’ direct supervisors at the State Department and the Clinton campaign wrote letters to the editor to push back on the criticism, arguing that she did draft policy analysis and recommendations.

In California, Jacobs does not have a Republican incumbent in her way since Rep. Darrell Issa decided not to seek reelection. But Jacobs is still battling with three other Democrats — veteran Doug Applegate, the 2016 nominee; attorney Mike Levin; and real estate investor Paul Kerr — and even more Republicans in the top-two, all-party primary. (Some Democrats fear that the jumbled vote could lead to two Republicans advancing to the general election for the seat.)

Young voters could make the difference in Jacobs’ race. According to a measure developed by the Center for Information and Research on Civic Learning and Engagement at Tufts University, California’s 49th District is ranked 13th among districts nationwide in terms of races around the country “where young people have the highest potential to have a decisive impact on the result.” Allred’s race is ranked 38th on the Youth Electoral Significance Index, while Finkenauer’s bid to take on GOP Rep. Rod Blum in Iowa is ranked first.

Jacobs is using young people to power her campaign — even if they can’t vote for her yet. Annika Shamachari, a 17-year-old senior at Canyon Crest Academy in San Diego, joined three friends to canvass for her Sunday in Solana Beach, chattering over clipboards and campaign mailers stamped with Jacobs’ face.

When the group knocks on doors, “people are really inspired by what we’re doing because we’re so young, and that our generation isn’t waiting,” said Shamachari, who along with her friends won’t be able to vote for Jacobs in the June 5 primary. “Darrell Issa was here for such a long time, and people tell us that we need a new person, someone who isn’t involved with all of the corruption that goes on.”

But Jacobs believes her path to victory is lined by “women and young people,” who are “turning out to vote this year in numbers that are unexpected, and we’ve seen that in all the races this year,” she said in an interview just after sending out two dozen volunteers to knock on doors.

“A lot of people are looking at the activism around gun violence prevention and seeing that when young people get involved, it’s possible to change the narrative,” Jacobs said. American voters, she added, have previously elected “122 men who were in their twenties in Congress.”