Global confidence in US leadership has fallen to a new low, and the country now ranks below China in worldwide approval ratings, according to a new Gallup poll.

The survey of opinion in 134 countries showed a record collapse in approval for the US role in the world, from 48% under Obama to 30% after one year of Donald Trump – the lowest level Gallup has recorded since beginning its global leadership poll over a decade ago.

The result comes after a separate Gallup survey found that Trump reaches the first anniversary of his inauguration with the lowest average approval rating of any elected president in his first year.

That poll showed that Trump has averaged just a 39% approval rating since his inauguration. The previous low was held by Bill Clinton, whose first-year average was 10 points higher than Trump’s, at 49%.

The latest study confirms some of the worst fears of foreign policy analysts in the US and Europe that Trump’s “America first” approach, combined with his volatile and irascible personality, is weakening cohesion among western democracies in the face of a growing challenge from autocracies in Russia and China, and the rise of illiberal democracies and xenophobic nationalism inside Europe.

Germany is now seen as a global leader by many more people (41% of the sample), with China in second place on 31%. Russia has 27% approval for its global role according to the poll.

In just under half of the world’s countries – 65 out of 134 – US standing collapsed, by 10 percentage points or more. Some of the biggest losses were among Washington’s closest allies in western Europe, Australia and Latin America.

One of the sharpest declines in confidence in US leadership was in the UK, where it dropped by 26 percentage points. A third of Britons questioned in the new poll expressed approval, with 63% voicing disapproval.

“This year marks a significant change in our trends,” wrote Gallup’s managing partner, Jon Clifton. “Only 30% of the world, on average, approves of the job performance of the US’s leadership, down from 48% in 2016. In fact, more people now disapprove of US leadership than approve. This historic low puts the US’s leadership approval rating on par with China’s and sets a new bar for disapproval.”

As part of his “America First” policy, Trump took the US out several multilateral agreements on the grounds they did not serve national interests, including the proposed Trans-Pacific trade partnership and the Paris Climate Change accord. He walked out of talks on a new trade and investment deal with Europe and has threatened to leave the North American Free Trade Agreement with Canada and Mexico. 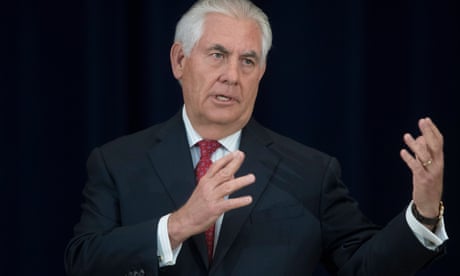 Approval of US leadership climbed by 10% or more in only four countries: Belarus, Israel, Macedonia and Liberia. It increased moderately in Russia, the former Soviet states in central Asia and parts of west Africa.

Trump’s first year in office has aroused particular intense antipathy. Gallup found that the median of worldwide disapproval of US leadership has hit a new record of 43%, higher than disapproval of Russia (36%), China (30%) or Germany (25%).

The US has fallen below China in the Gallup global poll once before, in the last year of the George W Bush administration in 2008, but both the US and China were significantly more popular then than they are now.

The collapse in support is particularly dramatic in Canada and Latin America, where 49% approved of the Obama administration’s leadership, with 27% disapproval in 2016. After Trump’s first year, the ratings graph has scissored sharply, with only 24% now expressing faith in US leadership – a new low – and 58% disapproving.

The Gallup report said that China, which has overtaken the US as the leading trading partner in parts of Latin America, “may be positioned to take further advantage”. It’s approval rating across the Americas is four percentage points higher than the US, but disapproval is much lower at 35%. Many Latin Americans have not made up their minds about Chinese influence. 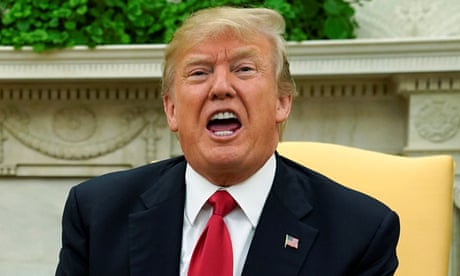 ‘There’s no other word but racist’: Trump’s global rebuke for ‘shithole’ remark

“It is too early in Trump’s presidency to deem his ‘America first’ foreign policy a success or failure,” the Gallup report said. “However, it is clear that based on the trajectory of what the world thinks of the US, many of the US alliances and partnerships that the Trump administration considers a ‘great strength’ are potentially at risk.”

Daniel Drezner, a professor at the Fletcher School of Law and Diplomacy said that the most serious finding was the severe drop in approval for US leadership in the world’s democracies.

He said: “Elected leaders care what their publics think about the United States. These numbers will make it harder for those leaders to publicly cooperate with the Trump administration – even when it might be in their interest to do so.”

“It is difficult to interpret this polling result as anything other than a visceral reaction to Donald Trump. In reality, this administration has devoted itself to renewing and rebuilding alliances which had been neglected for years, from Great Britain to Japan to various partners in eastern Europe,” Gonzalez said.

“While China has consistently attempted to expand its global reach, it still has no soft power – worldwide, there is no Chinese version of blue jeans, cinema, TV shows, way of life, music, and the like. There are no 700 million people wanting to move to China. President Xi’s ‘Chinese Dream’ is a transparent attempt to mimic the American model.”