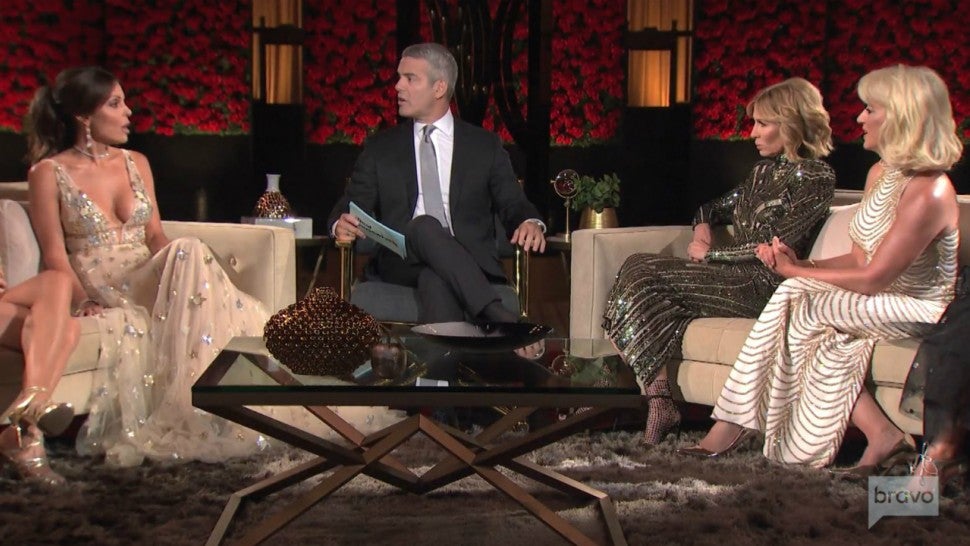 This is tenth reunion of Bravos second oldest Housewives franchise.  After a little research, I think I know the secret sauce that makes New York superior to the other cities, it’s continuity.

Vicki Gunvalson is the grand dame of all the Housewives franchises.  She has been with Orange County since the beginning.  However, her other cast mates haven’t been there as nearly as long as she has.

In New York, most of  the ladies know each other  through a mutual friends. At last nights reunion, we learned that all the women (with the exception of Tinsley) knew the first seasons cast member Jill Zaran.  Most have known her for more than 10 years.

In New York, Ramona Singer is the grand dame, she has be a full cast member for the run of the show.   Luann has also been a cast member for 10 years, however by the sixth season she was demoted as a friend of the show. she was reinstated to full time status by the seventh season.   Bethenny Frankle, left the show at the end of the third season and returned the seventh season.   As for the rest of the cast, Sonja Morgan seven seasons, Carole Radizell six, Dorinda Medley three and Tinsely Mortimer two.   These women are connected by way of mutual friends and New York’s social scene, this is their secret sauce. Only three cast members in Orange County have appeared longer than two years.

When a new housewife comes on board, she and her cast mates often spends a season or several seasons adjusting to each other, it makes good dramatic TV but it takes time for the personalities to Jell.  This season, Orange County has added two cast members, they don’t seem to have any connection with the other castmates.

In many ways this group of women in New York is like family.  You may love them all of the time, but you make not like them most of the time and there are some you just cant stand at anytime, but tolerate during holidays and special events.   Like family, the alliances change. One year you cant stand your brother and three years later, your good freinds.

For years, Sonja and Ramona were insperatble, this year they aren’t speaking.   Luann and Bethenny was at the center of some of #RHONY’s biggest fights,

this year they have grown close.  Bethenny and Carole are out, as is Dorinda and Luann,  Carole and Luann rarely spoke for a few years and today they are building a friendship.

Part One of Season 10 #RHONY Reunion

Most of the housewives came to war in gold. With Dorinda and Sonja looking the best.  Sonja took a page from Bethenny’s book and wore the dress she designed. $179

Missing from the battlefield was Luann ,who was in Rehab at the time of filming.

Andy seem like he was in a mood, and that may help set the tone for the evening.  Carole’s phone went off an he was in attack mode.  The first half of the reunion is the typical boring shit.  How’s your hair, you look good.  A look back, blah, blah blah!

One thing that is very clear at this Reunion is there is a lot of anger and resentment.  Most of it directed towards Bethenny.   The Ramona and Bethenny relationship is long an deep.

Full disclousure:  I am a BIG fan of Bethenny Frankle, she is very intellegent, extremely funny, and at times a neroutic mess.

Bethenny is the golden housewife, who we witnessed start with nothing and built an empire.  We’ve seen her raw, and very emotional. However, we have seen a real mean ,nasty dismissive Bethenny.    We’ve seen Bethenny slice and dice many housewives especially, Luann, Sonja and Ramona.    Ramona is no match for Bethenny’s ginsu tounge.   Last week, when Ramona attempted to confront Bethenny at Luann’s after party.  Bethenny shut her completey down and she has done this before.

Ramona, has more to say at last nights reunion than she did all season.   Intinally I thought it was jealousy.   But when you listen to her  go on an don about her acomplishment and how she put herself through school, while Bethenny’s rich father paid for her schooling.   I think Ramona want some acknowlegement about the things she’s accomplished.

When the season began, ten years ago, Ramona had made her mark on her own.  She unlike Bethenny who was stuggling to get Skinnygirl off the ground had made her own money.  She didn’t want to depend on a man!       So when Bethenny highlights and dismisses Ramona’s and failures, this is personal, especially when Bethenny doesn’t acknowledge her own businesss failures,  that some of her castmates reminded her of.

Ramona, says Bethenny doesn’t support other women .  At one point Ramona reminded Bethenny criticized Sonja for having fake businesses.  Bethenny said, she never criticized Sonja.   (where was the tape?) this set Ramona off.  “Oh my god, I can’t take her lies. I may walk off for her lie,”

“The Bethenny Pile On”

Last night, plugged in the wayback machine and in it. we saw how through the years Ramona has been beyond nasty to my gurl Bethenny.  We also saw the nuturing side of Bethenny, how she comforted and knew the right things to say to the housewives.  What we didn’t see was her negatives, her attacks.   She called Dorinda a drunk.   She was a horror to Ramona a few weeks ago and seems to save her rage for Carole on social media and the two former besties were in a raging battle online.

They accused Bethenny of doing things for the Camera, including meeting with Jill Zarin at her husbands funeral.  Carole has questioned her motives in Puerto Rico.   All alone (Ramona actully covered Sonja’s mouth when she tried to come to Bethenny’s aid)  Andy reminded the women that Jill asked for the cameras to come in and that they were on a Reality TV show so filming is part of what they do.

Bethenny could have used Luann .

????  Do the Queen’s get preferential treatment?
See you next week
(PLEASE comment in the comment section, we love to hear your thoughts? )
CityFella