Ayah, a wearer of the niqab, weeps as she is embraced by a police officer during a demonstration against the Danish face veil ban in Copenhagen. Photo: Andrew Kelly/Reuters/Ritzau Scanpix
A photo of a police officer hugging an emotional niqab-wearing woman at a demonstration in Denmark on Wednesday has become one of the country’s most widely-shared images this week.

The demonstration in Copenhagen’s Nørrebro neighbourhood on Wednesday took place as a new law banning public wearing of face-covering garments including Islamic veils came into effect.

During the demonstration, a 37-year-old woman named Ayah became emotional and was consoled by a police officer.

The embrace was captured by Reuters photographer Andrew Kelly and the story has since become the most viewed article on newspaper Politiken’s website, the newspaper wrote on Thursday.

“This picture tells you everything about the fantastic land we want to protect together. These two women are everything I believe in. Not the niqab or the uniform. But love for each other when others want to turn us against each other,” Niddal El-Jabri wrote on Twitter. 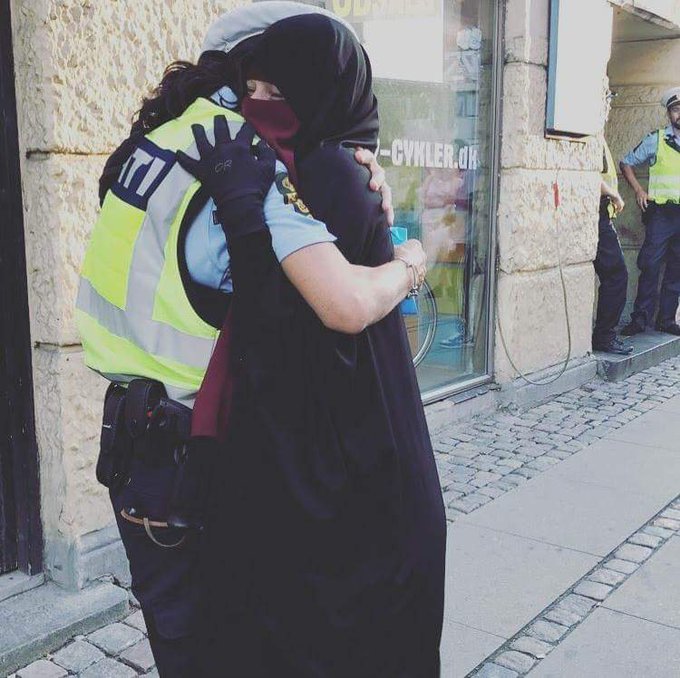 The woman in the photograph told Reuters prior to the demonstration that the law would limit her personal freedom.

“This is not the Denmark that we know. I can’t go out when I want to…I have kids, how do I pick them up from the bus and the school and the train?”, Ayah, who is reported to have requested her full name not be published due to threats, said.

The 37-year-old also spoke to Politiken after the photo was published.

“It was a very difficult day. We were very insecure, and we didn’t know what to expect. It was overwhelming. And then this dialogue police officer, as I call her, approached us to ask if we were okay and to offer us a drink of water,” she told the Danish newspaper, which took the unusual step of reporting the story in English.

“I told her that everything was fine. And I thought it was great that 3,000 people could march together peacefully,” she added.

She also said the policewoman told her she was personally against the law banning face-covering garments.

“To be honest, I can’t remember the exact sequence of events. But I recall that I was talking to her. And then suddenly I was crying. It was weird, because she was just being nice and friendly. She told me that she was personally against this law, even though she is a police officer,” the 37-year-old said.

“I had mixed emotions. On the one hand, this woman is being really friendly, but she is also a person who is entitled to fine me tomorrow when I leave my house,” she continued.

Similarly to niqabi women interviewed by The Local at Wednesday’s demonstration, Ayah said she would continue to wear the niqab despite the ban.

“I’m not bothering anyone, and I wasn’t a criminal yesterday. I will continue to wear my niqab as I always have. And then I guess I will have to isolate myself even more in my apartment. I’m not a millionaire, you know, so I can’t afford to pay the fines,” she told Politiken.