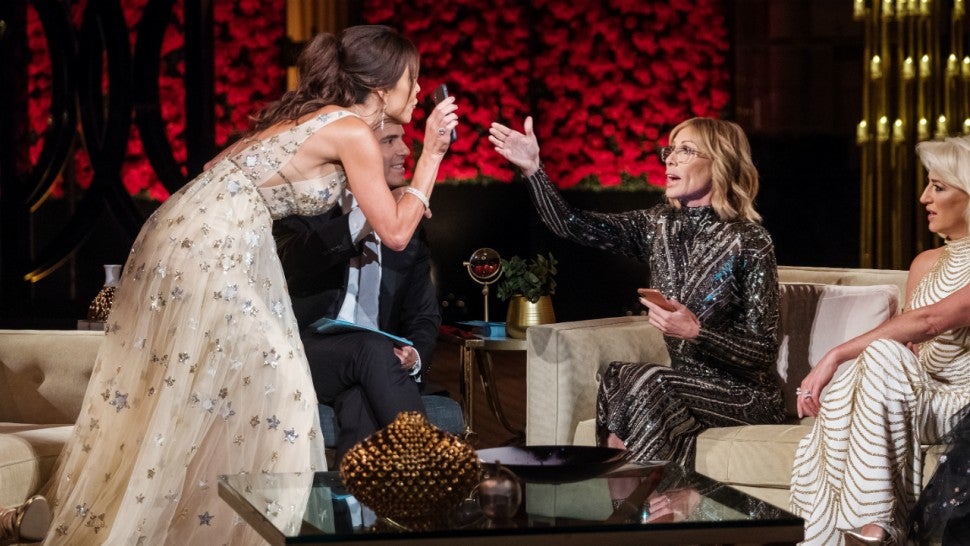 Part two of the RHONY reunion was much like part one. The Bethenny pile on continued however, I felt less sorry for Bethenny.

The night began with Dorinda’s drinking.   Is she a drunk or isnt she?  Dorinda said she wasn’t drunk during her heated exchanged at dinner with Luann in Cartagena.  She also she wasn’t really drunk at other events including when she stabbed her hand at dinner.  Bethenny and Luann had mentioned Dorinda drinking however it seems that Bethenny backed down a bit and with Luann being in rehap, I guess we will never know.

For TV, Dorinda drunken rants are funny.  In the real world, her drunken antics is cruel, if your are the victim .  Right Sonja?   Who said:  Dorinda told her she can’t say anything because she’s always drunk: “Yeah, but I don’t get drunk and insult my friends’ vaginas.”   W eve seen Sonja drunk out of her mind, but she doesn’t t attack anyone.

We did learn from Bethenny that she was part of an intervention with Luann which included her boyfriend Dennis Shields who has since died of an overdose.  We also learned from Bethenny and Andy that a lawsuit filed by Luann’s ex husband and  her kids was one of the reasons for her drinking.  Ramona, Carole, and the other housewives have seen her drink.  Ramona says she has been tossed out of a few establishments.

The Skinny:  Her Ex and her kids suing Luann

Luann is being sued by her first husband Alexander De Lesseps and her children Victoria and Noel.    Part of the divorce settlement, required Luann to set up a trust for her two children.   Luann received the home in the Hampton’s, half of the home belonged to the children. Luann sold the home in November of 2014 for eight million. and used that money to purchase another home.  No trust was ever set up.

Luann, and your friends say….

Luann’s show is a bonafide hit!  Bethenny and Dorinda said that Luann was feeling herself a little bit after the success of the show.  (sounds a little snarky-wouldn’t a real friend just say “Hey, I’m really proud of my friend) They said, Luann ,let her ego go out of control because she felt like her trouble with the law made her even more famous. Dorinda said  Luann “confused fame with infamy.”

“Say it forget it! Write it Regret it!”

Say it again, say it again, SAY IT AGAIN!   So many tedious fights on Social Media begin an end with a tweet, message, or a blog posting.  Not just on TV but in our every day life.  I imagine for some people it is easier  to vent via social media then it is to make a simple phone call.  I am sure, producers encourage cast mates to vent on social media.

I wanted the friendship between Bethenny and Carole to mend. Today I’m  like a lot of viewers I’m over it.     It was a roller coaster ride, I was strongly #TeamBethenny but I started to turn after watching Bethenny talk about Carole with the other women, pretending Carole wasn’t there.   Then I invested in the tweeter rants (yes, I need a life).  Initially, was Bethenny sending out the tweets.  (Again this may have ended after an extended phone call)  Then Carole starting tweeting, her tweets we brutal, hard hitting.

Wednesday, night, Carole attempted to take the high road.  Every time Carole tried to talk. Bethenny interrupted her.  Then Carole snapped, she went off on Bossman (Andy) Telling him, he was full of shit.

Both ladies had receipts, pages and pages of receipts.  Who said what when to whom?   Like most long term fights, when Andy asked them what caused this rift and neither of them knew.

The season was good, but the reunion has sucked so far?

See you next week!  Hoping for a bombshell!