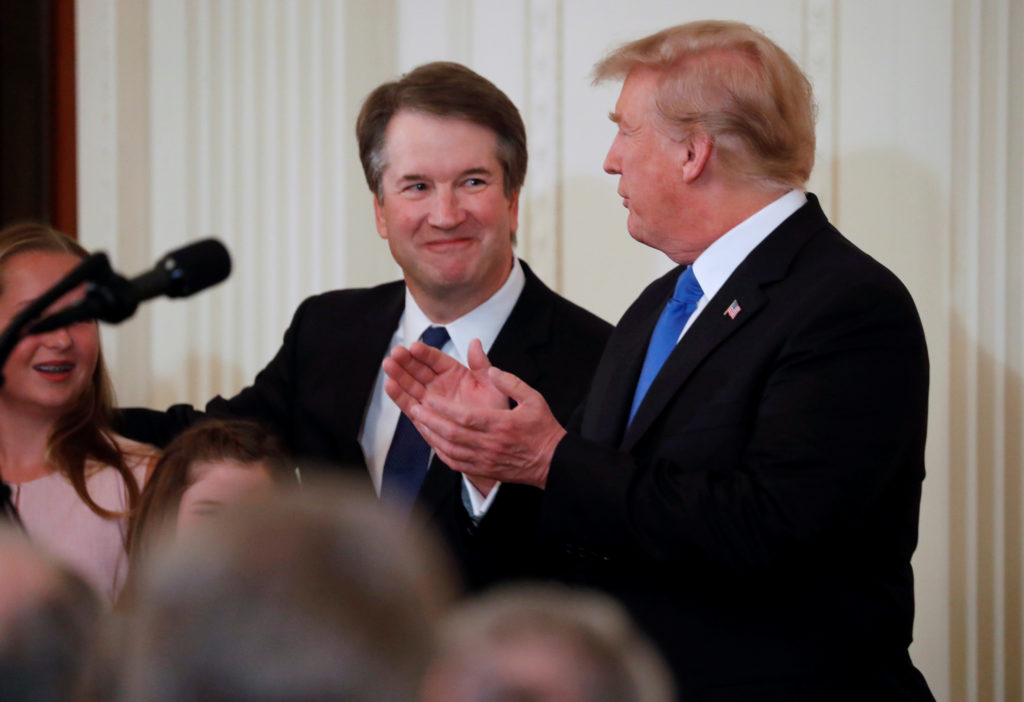 President Trump, is sticking by his man Brett Kavanaugh for the ninth chair on the Supreme Court.   He should have chosen a women. Well not a middle school or high school teacher there could be an ugly affair with a freshman.  But other women.

Earlier today he told the press, he felt sorry for Kavanaugh to go through this. He felt bad for his family, his children.    “This is not a man who deserves this,”

Trump is consistent, he stood by Alabama’s Roy Moore, a man some called a pedophile.  The women who came forward ,had an vendetta and were closeted democrat’s.

The current villains are the Democrat’s.   With the chief villain, being Senator Dianne Feinstein.  In a world where facts are fake news, The Washington Post (9/16/2018) reported:

In late July, she sent a letter via Eshoo’s office to Sen. Dianne Feinstein of California, the ranking Democrat on the Judiciary Committee.In the letter, which was read to The Post, Ford described the incident and said she expected her story to be kept confidential. She signed the letter as Christine Blasey, the name she uses professionally. Though Ford had contacted The Post, she declined to speak on the record for weeks as she grappled with concerns about what going public would mean for her and her family — and what she said was her duty as a citizen to tell the story.

The Republican (Trump) Party has become “no women’s land”.   The approval of Kavanaugh would have most likely been a tie, with the Vice President being the tie breaker.

The Republican party not releasing all information about Kavanaugh’s background will now comeback to haunt them.     Some of the early attacks by some Republicans on Professor Ford combined President’s words today, may fuel the anti Trump movement in November’s General Elections.

If there is a hearing?  Kavanaugh and his schoolmate Mark Judge (if Judge is ordered to testify) will have some scary splaining to do.

D.C. based attorney, Seth Berenzweig received a copy of 1983 Georgetown Prep high school yearbook.  Berenzweig said he received the yearbook from a woman who did not want her name revealed. Berenzweig says she brought it forward after seeing Judge Kavanaugh’s repeated denial of engaging in inappropriate behavior with a then 15-year-old girl at a high school party.

“The question of integrity and character and fitness,” said Berenzweig. “There’s information here that appears to potentially be inconsistent with what the judge said earlier this morning.”The yearbook has pages dedicated to each graduating high school senior. Kavanaugh’s page includes references to the “Keg City Club” and “100 kegs or bust.” “[He’s] someone who apparently may have had a reputation for some heavy drinking,” said Berenzweig. Kavanaugh’s page also includes a reference to the ‘Devil’s Triangle’, one possible interpretation of which is slang for a sexual situation involving two men and a woman.  It raises questions and I think the purpose of the disclosure of this is not to attack Judge Kavanaugh, not to attack his credibility. But just to make sure the American people and the Senate Judiciary Committee have all the information available when considering this lifetime appointment,” said Berenzweig.

Mark Judge wrote the book “Wasted: Tales of a Gen X Drunk.  In it, he details his experiences of extensive drinking while attending Georgetown Preparatory School.  He talks about what he got away with and describes a school swimming in alcohol.

Judge also references a “Bart O’Kavanaugh,” who he writes vomited in someone’s car. It has not been confirmed whether this is a reference to Kavanaugh.

This echos the hearings of Clarence Thomas and Anita Hill, the difference is, the #meetoo  movement.  An attack on Ford’s character will be viewed as hostile.  The Demo’s want an FBI investigation, which might delay the installation of the new judge.  Earlier today, the President said, the FBI shouldn’t be involved.

If others come forward it will damage Brett Kavanaugh. If there is a public hearing it will forever change the lives of  Professor Ford and Mark Judge.

The optics will further damage the Republicans, 9 billion men, two women.   The Democrats are salivating, they want a show, however the Demo’s often overplay their hand which could turn off voters in November.  Judge Kavanaugh should ask for his name to be removed.  The question is, how much are the Republicans is willing to lose for a Justice Kavanaugh?