When you are a large person, your always aware of space.  Can I fit in that chair is it strong? When it comes to size the rule of thumb, is a large exterior equals a large interior.  In the past, I would typically rent a full size car or larger. One year, a rental car company substituted the last generation Toyota Corolla.  It was torture, even with the seat reclined so far back I could reach into the trunk.

My introduction to then First Generation (2011) Chevrolet Cruze was at the San Francisco Auto Show. After pushing the seat back as far as it go I squeezed in and escaped before I lost consciousness .

A friend and auto blogger told me to test drive the Cruze, he thought it was roomy. (of course, he did, he’s 5.10 and one hundred seventy pounds) .    I went to a local dealership who lent me a top of the line Cruze LTZ.  Where I discovered the seat could be lowered.

It was a Game Changer, with the seat lowered, it was a different car.  With acres of  big man room.  The Cruze was the only vehicle, I could actually fully extends my legs. A feat couldn’t be duplicated by Escalade, F-150 and other large vehicles.  I became a fan, back then I called the Cruze “The Caddy of small cars”

This is the second generation of the Chevy Cruze, introduced in 2016.  I liked the squared body style of the first generation of the Cruze.  The second generation is larger and lighter and it has more rear legroom than the first.    The 1.4 turbocharged engine at 153hp and 177 lb-ft or torque is more powerful than the first generation and General Motors continues to give us (horns blowing) a traditional six speed transmission.  The Cruze is the only small car in America  that offers a diesel engine 52mpg.

Please GM, PLEASE, don’t give us one of those noise producing, Continuously Variable Transmissions,that most automakers (Honda, Toyota, Nissan )are putting into their cars for fuel economy.

The Cruze comes in a sedan and a handsome hatchback. 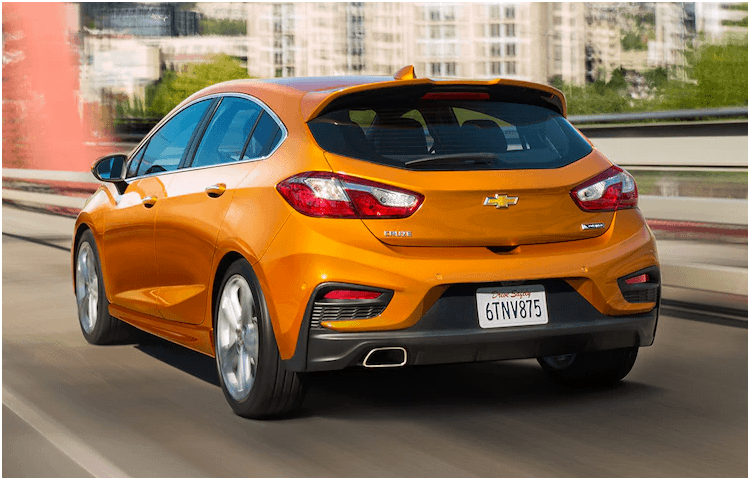 Unlike, the first generation, every Cruze comes with a touchscreen and has Apple Carplay and Android Auto standard.

Pairing my phone with Chevy’s My Link infotainment system was easy, however, I struggled with Android Auto.   The overall sound was just okay. Note: GM, like many car companies do not offer CD players.   As in other GM cars the Cruze can be optioned with 4G Wi Fi hot spot.

3800 Miles in the Chevrolet Cruze

Round trip from Sacramento to Central Texas and beyond.  Like the first generation, I still have to pinch myself, that this an “American” car?    I love the Ford Focus, its fun to drive and the hatchback has aged well.  What hasn’t is Ford’s Automatic Transmission, its been a disaster and after 7 years they haven’t worked the bugs out of the tranny and after 7 years, they only offer a 5 speed stick.

The interior of the Cruze remains a nice place to be and the front seat comfort is as good or better than the last generation.  Inside there weren’t any gaps or squeaks or rattles.

I left Sacramento at 11pm to avoid LA’s notorious rush hour traffic, my first stop was Phoenix. At 75 miles an hour, my mpg was 43.    It took a while to adjust to the front and rear controls on the steering wheel.

While the fit and finish inside, seemed perfect. In the light of the day in Phoenix, the Cruze’s build quality wasn’t close, body panels were misaligned.    At 14 cubic feet the trunk is average for the class.

Through the mountains and some rough roads in New Mexico, the Cruze never lost its composure. It was quiet and rode like a much bigger car.

If I had one nagging complaint about the Cruze it be the ingress. (at least for me) With the seats positioned for me, I had to lower the seats to get out or the car.   I didn’t notice this with the first generation Cruze.   I’m not fan of the auto stop feature,found in many cars where the engine shuts off at a stop light or anytime the car is not moving to save fuel.  Its effective, but I’m not a fan.

Handling was good Cruze.  Not once did it run out of steam in the mountains.  Or lose its composure in the worse of thunder storms.    The Cruze isn’t as fun to drive as the Honda Civic, Mazda 3 or Ford Focus.  It never embarrasses itself  The Hyundai Elantra sedan and the Toyota Corolla have more room overall, but neither has the power or can match the quiet and ride of the Cruze.

The Chevrolet Cruze may be the car for a small family, a commuter or an urban dweller.

If you are a tall or extra large, the Chevy Cruze is worth a look.  The 2018 models are  available with a six speed manual. (the six speed is not offered in the 2019 model year)

Sales for nearly all sedans are down.  The Cruze’s sales are down over 30% from 2017. Deep discounts are available.  As of this date GM is offering a $3200 rebate.