You have to give to Bravo, sometimes the directors are shadier than the castmates. Tonight’s episode was okay, nothing earth shattering. However for me, your big old shady blogger its was all about Yovanna, a friend of Nene.

Nene and Gregg were hosting a couples party “Boobs and Bourbon. This year it wasn’t held at the Leakes (all white) compound, where would be grown ups spilled drinks and messed up

At this event there are new people, old friends, other halves, Eva and her fiance Michael, Marlo date wasn’t in a wheel chair and breathing mask, he was a fortyish caucasian (that some suspect was a member of production crew (that why we didn’t hear how they met) but he has a nice smile and good disposition.

We get to see Tanya (the new girl) and her fiance Paul, Porsha officially brings Dennis, who abandoned his ATL hip hop swag and came in dressed like an black insurance man who works in a Irish neighborhood. He came dressed in a green suit white shirt and yellow tie(some people called him a leprechaun). We will have to wait a bit longer to meet Cynthia’s boo (Mike Hill) she brought a spare,who she calls a good friend. We also meet friends of Nene, Yovanna (in a bright yellow dress) and her husband.

At the beginning of the event, there is wine tasting. The camera’s plays close attention to Yovanna’s drinking as is it less of a taste and more of a swallow. As the guest’s move to the main room. We hear Yvonne say’s something like about some bitch better hurry up with her drink. By his expression, her hubby knows she is leaving this dimension.

Eva, tells Yovanna “its nice to meet you” Apparently this riles her. It seems that Eva and Yovanna went to Clark Atlanta University. and they have a friend in common, in fact the friend is gonna be in Eva’s wedding.

Suddenly there is DRAMA! Not from Dennis and Kandi, he’s heard all the stuff she has said about him. Not even from Porsha and Kandi. Its Yovanna. she’s very annoyed. She tells Eva, You said its very nice to meet you, as if this is the very first time we met? I don’t recall meeting you. Eva Responds. THAT’S IMPOSSIBLE!! I was THAT BITCH “Yavonna” from CAV! Yavonna says emphatically! Yovanna’s husband buried his face in his hands in total embarrassment.

When someone asked her why was so this important? She said I’m trying to find out why she never spoke . I guessing as Eva’s. Career blossomed Yovanna may be a lil jeli.

In her confessional, Eva said ‘There is absolutely no way I would hang out with someone who would opt to wear a flammable dress reminiscent of a banana flavored condom”

The episode began with a little tease from Bravo, we see male legs descending the stairs at Lake Bailey, who was slicing strawberry. It wasn’t her new boo (Mike Hall), it was Noelle’s father Leon.

Cynthia and Leon are the coolest parents on reality tv. Not only are they good friends but they are one when it comes to parenting their daughter, with Leon being more the disciplinarian of the two. Cynthia, wants her to have fun and get her own apartment, Leon wants her in a dorm and using public transportation.

We then get to visit Tanya Sam’s home and learn she and her fiance spend a lot of their time between Atlanta and San Francisco. Nene tells her the girls like her but wonder why after three years hasn’t she married?

Porsha meets with Kandi to talk about Dennis and tattoos in such. Porsha reminds Kandi, how Kandi doesn’t like it when people talks about her. And she isn’t concerned about the tattoos. Porsha tells her, most people’ vagina’s and penis’s aren’t exclusive. Kandi comes back with, but we don’t tattoo every bodies names on us that we gone had sex with. Kandi admits to being messy and seems genuinely concerned about Porsha, moving too quickly in the relationship with Dennis. Note: The problem is two fold. Their relationship is mending and they are not close. The other is, a true friend would talk to her first about her concerns and not tell everyone in the Atlanta Metro Area.

The episode ended in Dennis’s loft. Its his birthday. A chef his hired and is preparing a buttery feast ( and I mean buttery-did you see the hunk of butter on those biscuits) for twenty. Nothing low cal (I fucking love the south)!!! Porsha brings up the gossip about them. He tell her everyone has a pass including Kandi, and he knew about her back in the day. But hey it was back in the day.

He give her an gift of an expensive necklace and she gives him to boxes. The first one contains baby shoes and the second contained baby clothes. Confused, Porsha told him she’s expecting. 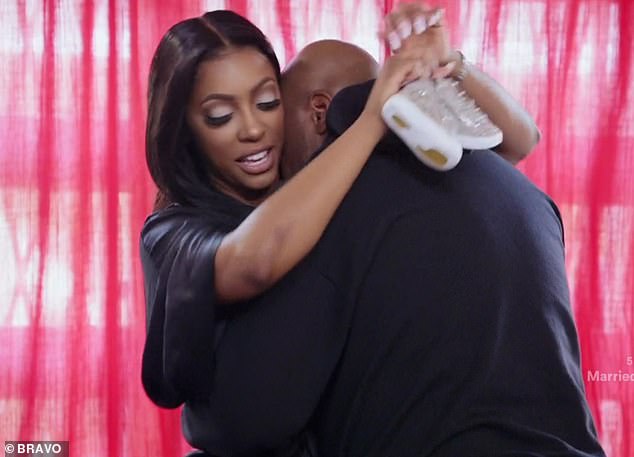 Overcome, Dennis rested his head on her shoulder, showing he had been crying as he finally lifted his head, with her telling him: ‘I love you.’

Later, she said in a confessional: ‘I have never had someone love me the way he does. 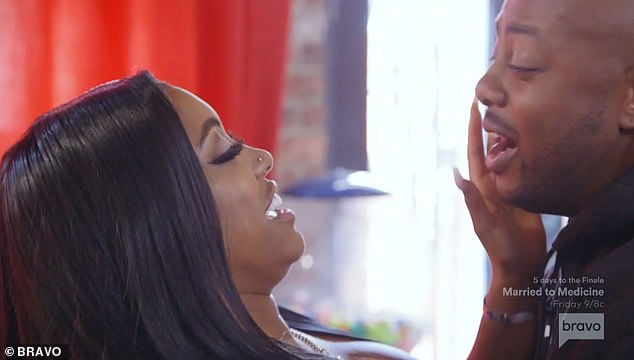 ‘I have never had someone want to be there for me. So that’s why this pregnancy is like a miracle to me. Because I am starting to see all these things that I have prayed for and wanted for so many years actually happen.’

Last Week  Kandi was Messy, it was all Porsha and Dennis, or Dennis and Porsha

Click on the link below for all Kandi’s Mess