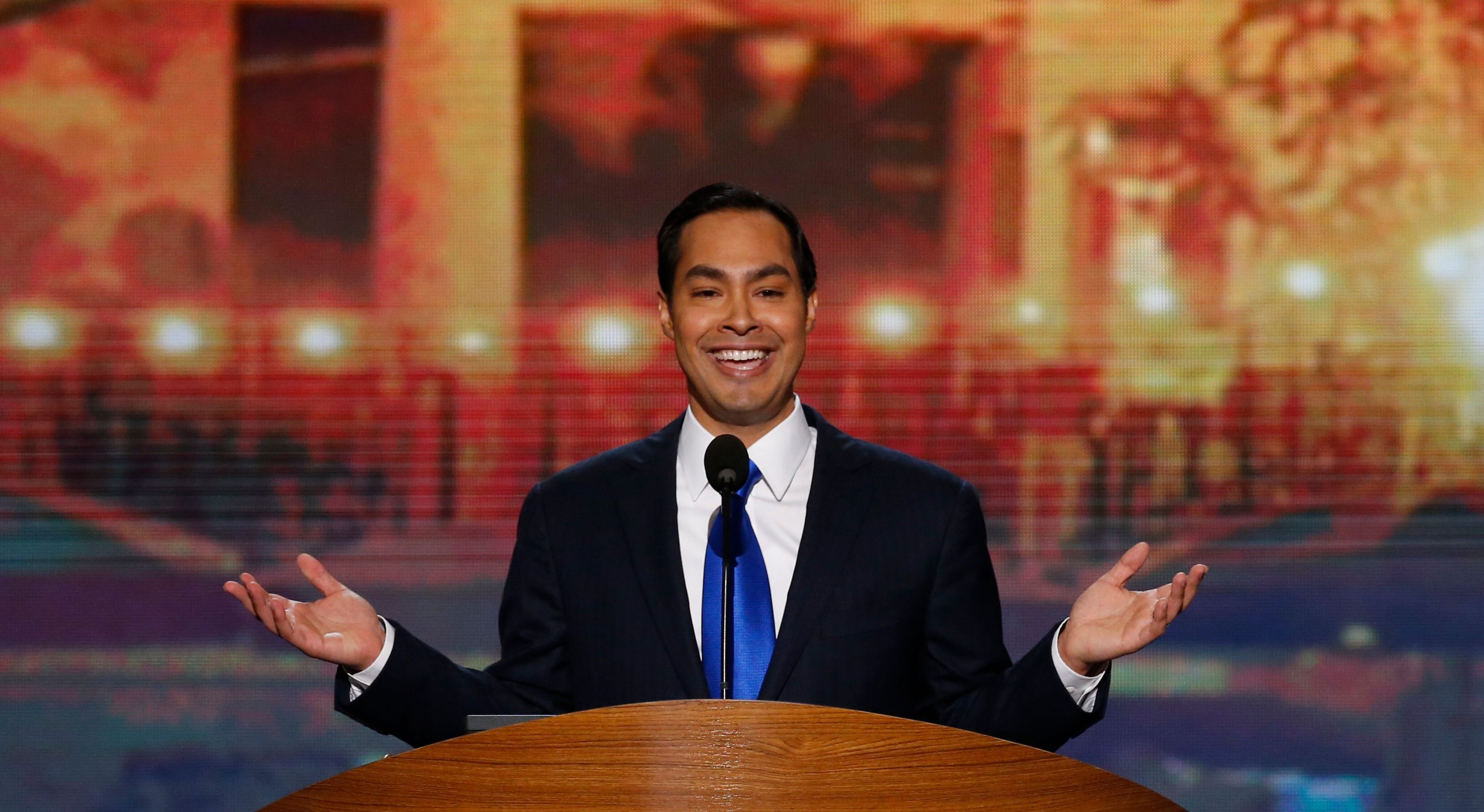 It may be Donald Trump’s nightmare: a Latino is trying to take his job. Some may consider Julián Castro, who announced his 2020 presidential bid before a cheering crowd Saturday, a long shot. They could not be more wrong. Julián Castro is a hugely important candidate in the Trump era. For Mexican-Americans and other Latinos, Castro is — quite simply — a role model. For non-Hispanics, he is a visible symbol of Latino achievement.

Most crucially, as a candidate, Castro is a living repudiation of the negative rhetoric that President Trump often puts forth about Latinos, who represent a surging demographic that made up about 13% of the electorate in the midterms.
Castro understands all this. Here is how he put it when he announced in San Antonio last weekend: “When my grandmother got here almost a hundred years ago, I’m sure she never could have imagined that just two generations later, one of her grandsons would be serving as a member of the United States Congress and the other would be standing with you here today to say these words: I am a candidate for president of the United States of America,” the former secretary of Housing and Urban Development said.
The grandson of a Mexican immigrant and the son of a community activist, Castro attended Stanford University and Harvard Law School. In 2001, he was the youngest person on the San Antonio City Council. In 2009, he was elected mayor of San Antonio. At 39, he was the youngest person in Barack Obama’s Cabinet. In short, he’s young, accomplished, and Latino — all factors that could matter as he pitches himself to voters.
Castro’s emergence onto the political scene is also a watershed moment for Latinos, because they have not had a national political leader since the heyday of Cesar Chavez. A 2013 survey by the Pew Research Center asked Latinos who was the most important Hispanic leader in the country. The top two answers were “Don’t know” (62%) and “No one” (9%). Meanwhile, three-fourths of Hispanics say their community needs a leader. Castro has a chance to fill that role, at the very highest reaches of the US government, and to serve as an inspiration to young Hispanic Americans.
And his candidacy comes at a particularly fraught time for Hispanic-Americans and immigrants. Indeed, to hear the President tell it (when he was running for President), Mexican immigrants are “bringing drugs. They’re bringing crime. They’re rapists. And some, I assume, are good people.” The President has done his best to conflate Latinos with MS-13 gang members and “illegals.” On top of that, Latinos are often portrayed in the media with negative stereotypes. A Latino presidential candidate who is educated, assimilated and successful will remind Americans that Latinos are good citizens with solid values.
Castro says he plans to focus on issues like education, health care and climate change. Such topics may be boilerplate among progressives, yet they carry extra resonance coming from a Latino. Too often, Latino politicians are only afforded a national audience to talk about topics like immigration or the border. How refreshing it will be to hear Castro discuss his plans for a “Green New Deal,” and universal pre-K.
While immigration is no doubt important to Castro, a Texas native, the public needs to see that Latinos are not single-issue voters.
Castro is not the first Hispanic to seek the Democratic nomination for president; former New Mexico Governor Bill Richardson ran in 2008, and West Virginia State Sen. Richard Ojeda has thrown his hat into the ring for 2020 as well. But Castro has the potential to go further, as the Democratic Party — particularly in this moment — is increasingly welcoming to diverse candidates.
And it doesn’t hurt that Castro is more than three decades younger than Democratic front-runners Joe Biden and Bernie Sanders.
Because he is not a household name, Castro will have a steep climb to win the nomination. According to the FiveThirtyEight blog, his path to victory lies in appealing to Latinos, millennials, and Democratic Party loyalists. As such, he can potentially attract Latino support in a way that past Latino presidential contenders like Sens. Ted Cruz, R-Texas, and Marco Rubio, R-Florida, could not.
In the 2018 midterms, Latinos favored Democrats over Republicans by a more than two-to-one margin, with 62% of Latinos saying they identify with or lean Democratic, compared with 27% who affiliated with the GOP. Changes in the Democratic primary schedule, with primaries for California and Texas moved up on the calendar, could also benefit Castro, as these two states are home to the largest number of eligible Latino voters.
Castro is now in the political big leagues. He has a unique opportunity to represent himself and his community to the millions of Americans who will be closely following the race for the White House. Win or lose, Castro’s candidacy is a step forward for him, for Latinos, and for all Americans.