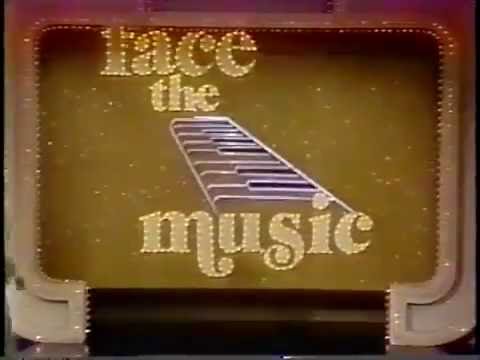 My niece said, they’re auditioning at the Hilton, you should go. Even though I hadn’t seen or heard of the show, I said okay.

The medium sized meeting room was filled with perspective contestants and staff, who asked you about yourself and hobbies. When they asked me had I’d seen the show, I figured I was doomed. But no one gave me the heave ho and we saw a video of the show and played a mock version of the show. I was terrible.

When I was younger, my mother and I would occasionally drive down to LA to see the taping of some of the shows like Johnny Carson, Laverne and Shirley and various game shows. The game shows were lucrative, because they gave audience members a fist full of tickets to entice us to sit through the hours of taping. It was common for them to tape ten to fourteen shows a day. We came home with Tee Shirts, Electric Can Opener and cash.it was grueling.

I had long forgotten about Face the Music when they called and told me to come down to LA. Bring changes of clothing and expect to stay  up to 14 hours a day. I had no expectations of winning a car or a ton of cash, I was just excited to be on TV.

My wife and I rented an Oldsmobile Cutlass and drove down to LA, where we stayed in a seedy hotel on Hollywood Boulevard near the Sunset Studios. I convinced her, the long day would be worth it because of the cash and prizes.

We arrived to the studio. As I was walking away, my wife remembered I had the rental car keys and the room keys and as she was walking towards me to retrieve the keys, she was blocked by two security guards. Who took the keys from me, and put them in an envelope, sealed the envelope and gave the sealed envelope to my wife, who was less than fifteen feet away.

In my mind, we would tape then break for lunch. I was assigned to a waiting area with other contestants ,where we were told the rules. We had to sign various releases including one very scary release that said, if the show was preempted in one of the five largest markets, we would forfeit our prizes. So if there was a national emergency, I could kiss my 1980 Ford Pinto goodbye.

We all learned that home during the taping would be this large room in a loft in the studio, where there was a dressing area, two restrooms and a large lighted mirror. The contestants were encouraged to entertain ourselves and watch the taping on a portable TV.

There were snacks for us.  A large galvanized steel tub filled with ice, held the IRIS soft drinks, coffee was in a large teachers coffee pot. with an orange light. Lunch on the first day was fried chicken, poured into another large steel can lined with a black garbage, bag and chips. Napkins were our plates. No one complained.

Face the Music was produced Sandy Frank, who was responsible for the very successful “Name that Tune”. The twist, however, was that in addition to identifying the songs that the orchestra played, the contestants had to link the song titles to famous people, places, and things. (Remember. I sucked here) The Host was Ron Ely, who was best known for his loin cloth in TV’s Tarzan. Way, way, wayyyy back in 1966. The Singer was Lisa Donovan who’s trademark move was twisting her shoulders at the beginning of every show. Her twisting slowly took over the room. By the end of the first evening all of us were twisting with Lisa

They called us for the show. People traveled from Washington State to be on the show. There were nearly eighty of us. Two new contestants for each show meant, only 28 would get on if they taped fourteen shows. If!

My reality changed after realizing that I wasn’t guaranteed to get on. After I told everyone I was going to be on. “Fuck”

I was one of six black contestants, one brotha, names Eugene, killed it and became the champion. While we should be happy for him, all we felt was dread. You never saw two blacks contestents on a game show at the same time in those days. Eugene went on to win three other shows. They taped 11 shows that day.

My new wife, had to suffer through hours of the taping and re-takes. She was disappointed that I didn’t get on. To make matters worse, the audience prizes were mostly tee shirts.

SELLING OUR SOULS FOR BIT OF HONEY

Several times a day the producers would visit the loft. The staff, asked us to chant their names as they walked up the stairs, the chants would grow louder as the producers got closer to the room, when the the door opened there as absolute pandemonium, we were jumping up and down falling over ourselves with phony ass smiles.

These were all self respecting people who would never act this way. ANYWHERE! But we wanted to get on, so we tossed aside our self respect and screamed they way the told us too.

By the second and final day, I was depressed. I kept it to myself, but sooned realized I wasn’t alone.  Even with the announcement, they were going to tape 14 shows, did nothing to relieve my sadness. I told everyone I was going to be on TV, and now it looks likes its not going to happen.

Eugene, who came out on top for four episodes, lost in the the pivotal fifth episode which would have guaranteed him a new car. I felt bad for wanting him to lose.

In the room, you could feel the disappointment. I even sang a sad song that make a couple of people cry.

At one point, they asked us to come downstairs. Showtime, was shooting a documentary (I think) featuring game show contestants. We all signed releases without looking. When the cameras were on me, I told them how excited I was to be on and how well we were treated (All lies)

We returned to more chicken. I sat staring at set. There was no more Lisa Donovan Twist. Just as I started to settle into my reality, I wasn’t going to be on. They called my name.

The other contestants made me feel important even though I would never see them again. The brotha worked on my Natural, others made sure every thing was perfect. No one had to coach me about my energy. I was ready.

When Ron Ely asked what I did? In song, I said I was an opera singer. My colleagues at the insurance company where I worked as clerk, teased me about that for months.

I didn’t make it past the first round, BUT, I was a hit, with pats on the back from staffers and the female producer. I got carried away by the laughs in the audience. Ron Ely, told me to settle down. But who was he? I was a hit!

My consolation prize was a selection of Bulova Clocks and a Case of Bit of Honey.

The car was especially quiet leaving the studio. Then all of sudden “Wedding Ring” WEDDING RING!! WEDDING RING!!! my wife is screaming! Was the answer, to the question. I made the mistake and said, I know! HOW COULD YOU NOT KNOW WEDDING RING!!! We have only been married a few months. WED-DING RING!

An unscheduled stop at Del-Taco, reduced the temperature of the car.

I have auditioned for several games shows. I knew what they wanted.  From the Zoo like atmosphere of the Price is Right, to Card Sharks, I was called by three of the four shows I auditioned for. But the more I thought about the degradation, the expense and making a complete fool of myself, and decided against it.

I can’t say if this is the experience at all game shows, but I was one and done.

Every now and then I will get a call from someone who has seen me on Face The Music, on Game Show Network and other Cable channels and I walk away, we no regrets. While all my children know that I’m crazy, I wish I could get a copy of the episode so they might share it with their children

See you on Cable