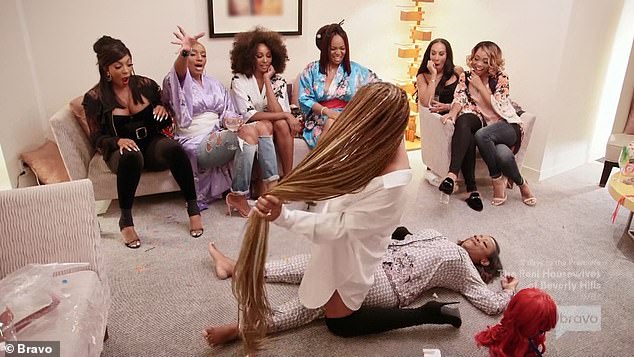 We began with Porsha getting a bouquet of flowers from Dennis in Atlanta.   She squeals and face times him showing him her enlarged breasts.  Its been a minute since the two have had interpersonal contact.   Hanging up the phone, Porsha makes the decision to ignore’s Dennis’s Past and the word on the street (Kandi)

Last night, we find Tanya frantically getting Eva’s bachelorette party in Tokyo.  I think she says it was her first party and trust me it shows.   She looked like she emptied out the Dollar Tree toy section.   It all looked cheap and nothing looked fun.  Shamari is the first to arrive to help Tanya   The food is all American and on point.  The memo said pajama’s and lingerie.  While the other ladies came out in sexy night lingerie

Kandi came in some pajamas that Lucy Ricardo would find in her drawer.  All she needed some was some pink rollers and a hair net and she would be all set.

The mood was hopeful until Nene walked in with a sad drawn face which immediately changed the tone of the party.   When Tanya offered her a drink, all Nene had was a stank face.

One of the things I have a problem with Nene is her need for attention. “All about Nene”. A regular person, might have lied, made an excuse not to attend, because they wouldn’t want to bring the party down.  But not our Nene.

Tanya hires a local stripper. Remember this is Japan.  He opens up his robe and the ladies were kind.  Except this stripper was modest, he kept his white gym socks on.  Eva, asked if Tanya “Yelp the Stripper”

Kandi said, they needed some real dirty fun.  Leave it to Kandi, who suggested using a household pickle as a penis.  With the pickle  ( for those who didn’t see the episode) the ladies were told to choose their favorite position and pretended to bang the crap out of each other. 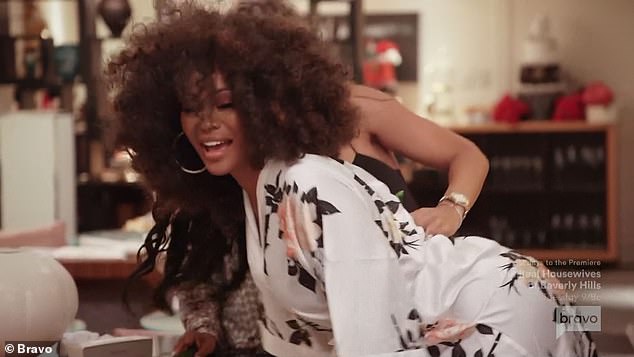 At one point, the pregnant lady gets real aggressive with Cynthia who was bent over the arm of the sofa and will yelling orders at Cynthia “to arch her back while Shamari is behind Cynthia.  There were pickles on top , It was wild as shit.!!!!   We didn’t see everything, trust me.  It even removed Nene’s black cloud.  I tell ya, I will never look at a jar of pickles the same way.

( wonder if the pickles were room temperature or….. )

The ladies hit the clubs, we saw bits of dancing and a drunk Marlo on the floor  in front of her floor at 4am.

Back at the hotel, Nene was finally able to get Gregg on the phone.  The two struggle with the call.  Nene learns Gregg  has changed his surgery date to remove his colostomy bag.  It’s clear Nene is near the breaking point. Everyone reminds Nene how strong she is.  But its a brave face that’s cracking.  ” I  have been the “strong” friend who everyone cries to and when you cry, no one knows what the do or how to handle it -I still have feelings” She tells Cynthia.  Who reminds Nene,  “She is there for her”.

EVERYBODY KNOWS “AYA” THE TOUR GUIDE IS NOT PLAYING

Even, Nene was on time.  The ladies see a samurai sword demonstration. They later get a lesson.  The ladies face off and has to choose which one has to die. Everyone is game except for Nene and Tanya who refuses to die.   However, Kandi, takes the Joan Crawford route, needing a minute to die.

Eva goes to Nene’s room and Nene breaks down after receiving a huge floral arrangement from Gregg with a lengthy apology.

Eva planned to fly to Los Angeles.  The ladies go out for dinner, Eva has bought Kimono’s for the ladies.

Eva thanks everyone for party.   She suggests that everyone go around and say their highs and lows for the year.  We didn’t here from all the housewives.   Cynthia low was her daughter going to college and her high, is her boyfriend Mike. Shamari, her lows is losing her passion for music., her highs were her children.  Kandi, lows is a balancing a busy lifestyle and being a mother, her highs are her successful businesses .  Nene, refused to participate.

Porsha didn’t have a low.  She emotionally talked about how Dennis has supported her in fulfilling her dream and giving her the life she always wanted.  The bravo camera occasional veered off showing Kandi’s face.  Kandi had something to add.

We returned to Kandi .  What we expected to happen, didn’t .  Kandi tears up and genuinely apologies to Porsha for saying all those shitty things about Dennis, because she’s been there with Todd.   She said she knows how important Todd has been in her life and if Porsha feels the same way about Dennis that’s all she needs to know AND Dennis has been nothing but nice to her.

As fillers go, this was a good one.

Atlanta is struggling this season.  Everyone is sensing a major overhaul next season.   Everyone might be concerned, it is rumored Vicki Gunvalson of the long running  Orange County has been demoted to friend (think Marlo).

The hottest housewives Franchise is currently  New Jersey, the three newest cast members have breathed new life into the once tired franchise.  Two weeks ago, it was off the chain and this Wednesday is the finale.

What do you think?