Could someone offer her a chair? 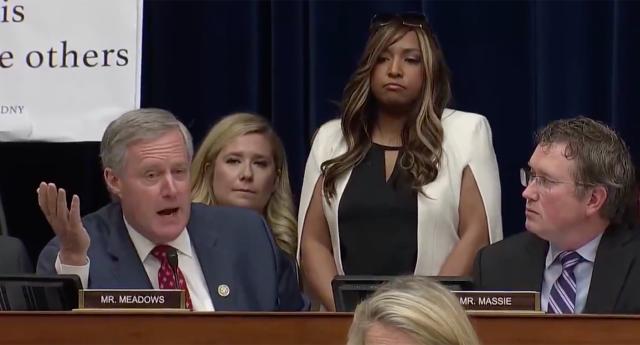 I think one of the reasons that black people loved Bill Clinton, is he knew black people, had black friends.  He and Hillary, didn’t seem out of place in a black church and didn’t need to bring a prop, when he spoke to people of color.

Unfortunately, the need of a prop is still a part of politics today.  There are some politicians, who believe they are more effective if they have a prop when they address a  crowd of people who do not resemble them ,to make those people comfortable.

Yesterday, North Carolina Congressman Mark Meadows brought a prop.  In the form of Lynne Patton.   President Trump former Attorney Michael Cohen testified before the House Oversight Committee. Said  Trump is a racist who told him that African Americans were too stupid to vote for him.  Lynne Patton sole purpose was to tell the world, that she is black and as a black woman she would never work for a racist.

I was troubled as this black women stood in a sea of white faces.  I guess they didn’t have an extra chair.

No one in America, will ever question if our President is a racist.

“Would you agree that someone could deny rental units to African-Americans, lead the birther movement, refer to to the diaspora as ‘shithole countries,’ and refer to white supremacists as ‘fine people,’ have a black friend, and still be racist?”  Yes he answered.

When it was Congresswoman  Rashida Tlaib of Michigan turn to speak, she went further.  “Just because someone has a person of color, a black person working for them does not mean they aren’t racist,” Tlaid said. “And it is insensitive, and some would even say that the fact that someone would actually use a prop, a black woman, in this chamber, in this committee”—here she took a heavy sigh—”is alone racist in itself.”

Congressman Meadows double down by saying he wasn’t a racist, as his nieces and nephews are people of color.  Clearly the Congressman isn’t close to his family as its very unlikely they would approve the use a person of color as a prop.

Congressmen Meadows lives in a world where people would never work or support anyone who is racist sexist, or homophobic with one exception, if he were President or Congressman from North Carolina.  Some will remember back in 2012, he told his supporters that they were going to send President Obama home to Kenya or wherever it is?

Turns out, Michael Cohen was responsible for Trump hiring Mrs Patton.   Cohen told the Congressman that there were no black executives in the Trump Organization.