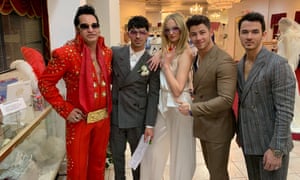 When Game of Thrones actress Sophie Turner married musician Joe Jonas in Las Vegas last week, she wore a pair of white, wide-leg trousers – and she’s not the first to ditch a traditional wedding dress for trousers or a jumpsuit.

On the high street, the latest wedding collection from Whistles features a wedding trouser suit as well as a cropped-leg lace jumpsuit, while Asos has a sequin-and-beaded trouser suit, two strappy jumpsuits, and trousers in its women’s bridal range.

On the catwalk, AF Vandevorst’s spring/summer ’19 collection included several bridal outfits, including satin trousers paired with wedding veils. Viktor & Rolf had a white, strapless jumpsuit as one of its 17 bridal looks, while Tadashi Shoji featured long-sleeve bridal jumpsuits in both white and pink.

“We’ve noticed a growing demand for less-traditional bridal outfits such as jumpsuits and separates,” said Amandine Ohayon, CEO of bridal brand Pronovias. “Nowadays, jumpsuits or two-pieces can have the same wow factor as a dress and can also be combined with trains, capes or gloves to provide a genuine bridal feel.”

Swapping a wedding dress for trousers or a jumpsuit is a trend that is emerging predominantly within western cultures, and particularly Christian, Catholic or non-religious ceremonies (trousers have long been part of traditional bridalwear elsewhere). In the UK, the rise in the popularity of wedding trousers coincides with the rise of registry office ceremonies, where brides are more likely to experiment with their look. Less than a quarter (24%) of all marriages were religious ceremonies in 2016 – the lowest figure ever.

More brides are now wearing several outfits over the course of their wedding day (about 23% of brides opt for more than one wedding look, according to Lyst), and there has been a rise in the number of weddings that take place over several days.

“Some brides choose a jumpsuit and a dress, so they can have the best of both worlds,” said Ohayon. “Something more traditional for the ceremony and a jumpsuit to dance the night away.”

Bridal designer Romona Keveža, who is best-known for dressing celebrities including Taylor Swift, Ariana Grande and Lady Gaga, has her UK flagship at The Wedding Gallery in London and included two jumpsuits in her fall 2018 collection. “I love the idea of a jumpsuit for a reception look, or even a civil ceremony or island wedding,” she said.

For some, of course, wedding trousers and jumpsuits may also be a small way to break with convention, while still taking part in this most traditional of ceremonies.

“They are a modern style statement for brides who want to surprise and stand out,” said Ohayon. “[Trousers and jumpsuits] may be a little more individual, while still being glamorous, stylish and aisle-worthy.”

With dancing at weddings fashionable, gowns are long but looser and easier to move in.

The Depression, so silk is out, affordable rayon in. Figure-hugging styles more common.

Rationing means dress suits or Sunday best but, for those wanting a dress, long sleeves and flowing trains are in.