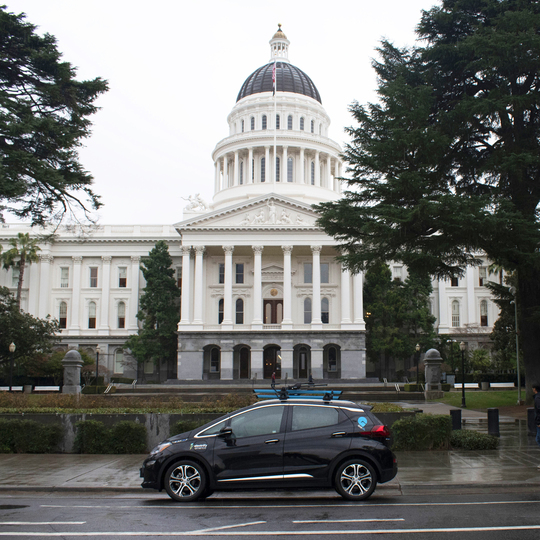 There is no joy at the pumps these days . If your driving a mid size car in Sacramento a tank of gas could cost you fifty eight bucks,.  If your driving a huge pick up or SUV nearly a hundred.   The more we spend for gas the less we have for other things.   If you like me, your looking at the Toyota Prius’s again and other hybrids at the pump.   One car you wont see at the pumps  is a Tesla or Chevy Bolt.

Avery  lives in midtown Sacramento and works in Auburn.   Nearly two years ago he bought a Chevy Bolt.   Avery rents an apartment and his landlord will not allow him install a charging station.  So for a petrol driving man like me, the natural question is why would he buy an all electric car?

His commute to Auburn is 42 miles. While his car uses extra energy going up hill, he said he can recapture most of that energy going downhill.

He said, his energy costs (the cost to charge his car) for March was fourteen dollars.

He said, his Chevy Bolt has been trouble free.  He has 31,000 miles on his Bolt and with an exception of a small rattle in passenger door its been trouble free.   The car currently needs a new set of tires.and there is a sizable dent on the drivers door. A victim of a steel pole  in a midtown alley.

He really likes the Bolt, its peppy and fun to drive.  He wishes he would have bought a model with more options.  He said the fit and finish could be better, but its wayy better than an a hundred thousand dollar Tesla his friend owns.

He likes:  Very low operating cost.  Its very peppy and fun to drive.   Roomy and flexible.   The he can drive in the car pool lanes.   What he paid for the Bolt, after Credits and discounts it cost him $26,000.

He dislikes:  The unavailability of fast chargers for the Bolt.  In and around Sacramento it its  On a trip to Oregon it was maddening, its like drip, drip, drip. Taking more than 90 minutes for a half charge.    Its the only reason, I would choose a Tesla over the Chevy.  The verbal attacks he has received since owning the Bolt.  Earlier this year, a lone driver in a car pool lane forced him out of the lane.   People have tried to unplug my car as it was charging.  Its like I’m driving an evil car.  Its ridiculous until its not.  While I’m one person, I feel I’m helping our planet.   My next car will be electric. When are you coming to the dark side?