Every year millions of tourists flock to big cities such as Berlin, Hamburg and Munich. But for anyone seeking something a little more picturesque and authentic, here are 15 of the most romantic towns and small cities in Germany. 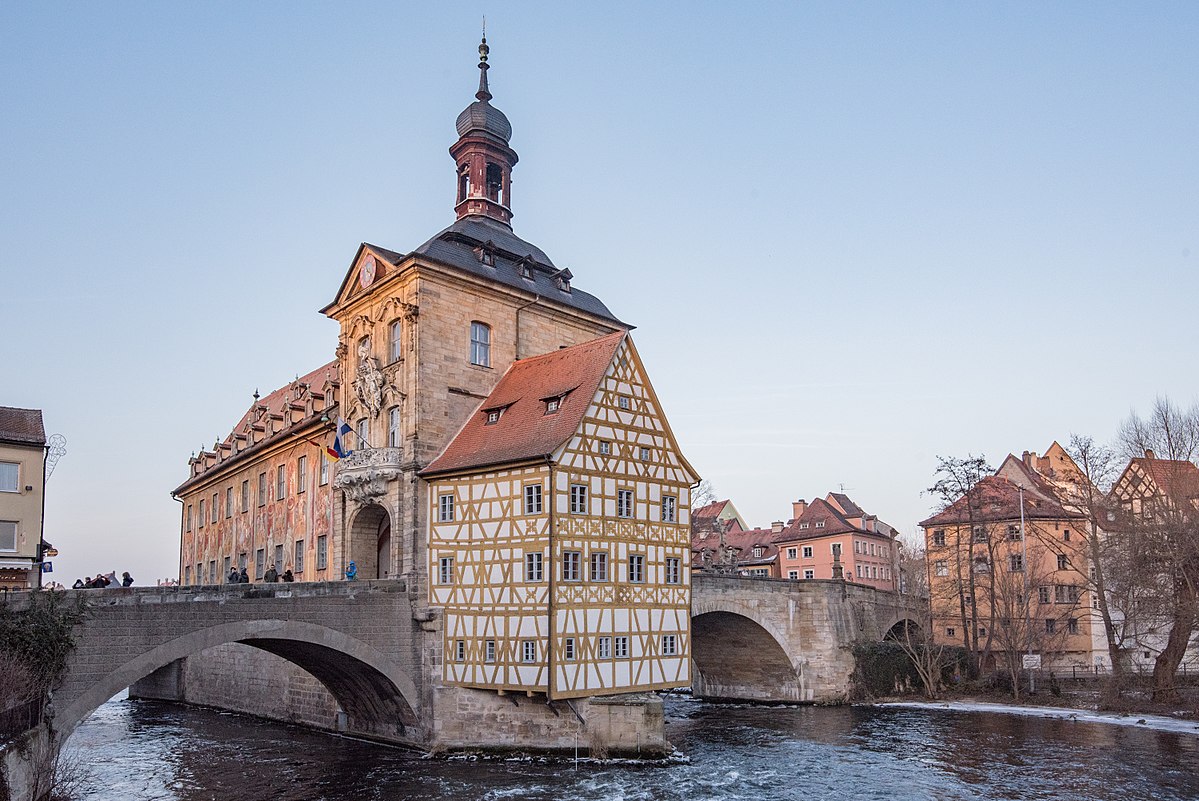 Like Rome, this small and enchanting city is  built on seven hills and its historic architecture earned it a listing as a  UNESCO World Heritage Site Aside from a huge number of medieval half-timbered houses, some of the most beautiful buildings include the late Romanesque/early gothic  Imperial Cathedral, St Michael’s Monastery and Alterburg Castle.   But what Bamberg is most famous for is its unique old town hall, situated in the middle of a bridge.

The Regnitz river splits in the center of the city creating the “Island District”  which has a pedestrian zone full of boutique shops and restaurants. You can even take a romantic gondola ride along the waterways past the former fishing settlement, known as ‘Little Venice’. After that, why not sample some of the region’s famous smoked beer at one of Bamberg’s many breweries. Finally, for a panoramic view of the area, you can’t beat the terrace at Altenburg Castle, which sits on the highest hill in the city.

This picturesque medieval town with a winding river, overlooked by a castle, is ideal for a romantic trip. Monschau is a great destination any time of the year. In the summer all the restaurants have outdoor seating along the cobbled streets and every August Monschau holds an open-air music festival ,while in winter the town is home to an idyllic Christmas market .

Situated next to the Eifel National Park  on the border to Belgium, Monschau is the perfect place for nature lovers, with a large number of hiking trails around the nearby hills. The town is also home to a glassworks , which holds daily demonstrations and has an adjoining market space complete with an indoor stream.

Meissen, situated on the Elbe river, is first and foremost the birthplace of European porcelain  and the items manufactured there are distinguished by two crossed blue swords. But even those who aren’t interested in the renowned Meissen ‘white gold’ will not be short of things to do.

The town is the oldest in Saxony and is considered by some to resemble Prague due to its red roofs. The gothic cathedral and adjoining 16th century castle dominate the skyline and give impressive views of the Elbe valley. Sachsen is the easternmost wine growing region in Germany, and Meissen produces mostly whites which tend to be on the dryer side. Aside from their September wine festival, throughout the year the town also hosts several art, music and culture festivals.

Heidelberg survived the Second World War unscathed, meaning that its rich architectural history was kept intact, including its iconic castle ruins on the hill above, which are visible from all over the city. Heidelberg is also known as the centre of German 18th century Romanticism  as many influential writers such as Clemens Brentano resided there. The Altstadt is full of baroque charm and hosts a magical Christmas market with its own little forest.

Another icon of Heidelberg is the arched bridge which crosses the Neckar river. Down by the river at the Neckarwiese, you can rent boats or simply enjoy a drink with a view of the vineyards lining the valley. For a spectacular view of the area, take a romantic walk up the Philosophers Weg.  You could also take a ride on the Bergbahn, meaning ‘mountain train’, up to the Molenkur,  a small Schloss which is the perfect starting point for hikes around the area. Rothenburg ob der Tauber is the star attraction of the famous Romantic Road , a route which passes through some of the most beautiful towns in Bavaria and Baden-Württemberg. It can get pretty busy, with almost 2.5 million vistors a year , but it’s not hard to see why. The mediveal walled town is truly something out of a fairytale.

Not only did the town inspire imagery in the Disney animation Pinocchio , it was also the filming location  for a very short scene involving Grindelwald in Harry Potter and the Deathly Hallows and setting for the town of  Vulgaria in Chitty Chitty Bang Bang. Aside from the romantic cobbled streets and half-timbered buildings, one of the main draws is the year-round Kathe Wohlfahrt Christmas shop , known as the Weihnachtsdorf, meaning ‘Christmas village’.

Dinkelsbühl is a Romantic Road walled city but comes with the added benefit of being slightly less touristy than other similar towns in Bavaria. Built in the 8th century and surrounded by a few fortified walls, it is essentially Rothenburg’s little sister.

The town has an interesting history as it accepted both Catholics and Protestants during the reformation. Good ways to spend your day in Dinkelsbühl include visiting the shops and cafes around the Weinmarkt  or admiring the town’s quaint architecture.

Lindau is a city on the banks of the Bodensee, the largest lake in Germany. Situated on the border between Germany and Austria, the town has spectacular views of the surrounding Alps across the aquamarine waters.

While much of the city is situated on the mainland, the Hintere Insel, meaning ‘back island’, is a unique and almost completely isolated district. In the summer it is the perfect location for swimming, paddleboarding and boat trips, and in the winter it is an incredibly beautiful place to visit, especially when there’s snow on the many red rooves of the town and (if you’re lucky) part of the lake freezes.

Trier is the oldest city in Germany, having celebrated its 2,025th birthday in 2009 and is, therefore, a great romantic destination for history buffs. This incredible history can be seen in the large number of Roman and medieval structures which still stand there today, and Trier is naturally a listed UNESCO World Heritage Site.

The town is known as the “Rome of the North”  and sites to see include the Roman gate, the imperial baths, the amphitheater and the 4th-century basilica, all of which are within easy walking distance of the center.

Trier is situated not far from Luxembourg, on the Moselle river. Not only does it have a rich Roman history but the town is also home to Germany’s oldest gothic church and happens to be the birthplace of Karl Mark  whose childhood house is open to visitors as a memorial museam.

Also situated on the Mosel river is Cochem. The town is overlooked by a majestic 11th-century castle which towers 100m above the river and is open to visitors daily.

It is the perfect stop on a river cruise and the town is surrounded by greenery, with forests, hills and, of course, vineyards. The area is known for the “queen of the white vines,” Riesling , and visitors to the area can even take a guided hike through the vineyards, stopping for breaks and wine tasting.

Quedlinburg is a tiny town north of the Harz mountains and is one of the best preserved medieval towns in Europe. Undamaged by war, the renaissance town is a UNESCO World Heritage Site, with cobbled streets, red roofs and half-timbered houses. In 2019 the town celebrates 1,100 years since King Heinrich I was crowned the first King of Germany as a single entity in 919 A.D – Heinrich was buried in Quedlinburg.

The town has a unique political history ,as it was a semi-independent state ruled by aristocratic women for 800 years until Napoleon invaded. The Abesses resided in the impressive Burgberg, meaning ‘castle mountain’, situated on the limestone hill above the town.

Also located in the foothills of the Harz mountains, Goslar is a great base for exploring the Harz national park. The town was officially founded in 922AD, but is thought to have been settled since pre-Roman times. Goslar is listed as a UNESCO World Heritage Site because of it’s historic mine, town gates and Imperial Palace.

Thanks to deposits of silver and copper ore at the Rammelberg mine near the town, it was one of the wealthiest trade hubs in the Middle Ages. The main square, which is home to a beautiful Christmas market, has a unique striped cobblestone design radiating from the center.

Recently named the best filming location in Europe, Germany’s most eastern city, Grand Budapest Hotel ‘, were shot across various locations in the city, as well as world-renowned films such as ‘The Reader’, ‘Monuments Men’ and ‘Inglourious Basterds’.

The city is home to around 3,500 monuments spanning 500 years from renaissance to art nouveau. It is split by the Lusitzer Niesse river into a German district and a Polish district, called Zgorzelec. This mix of cultures alongside the rich history makes it a fascinating city to wander through. 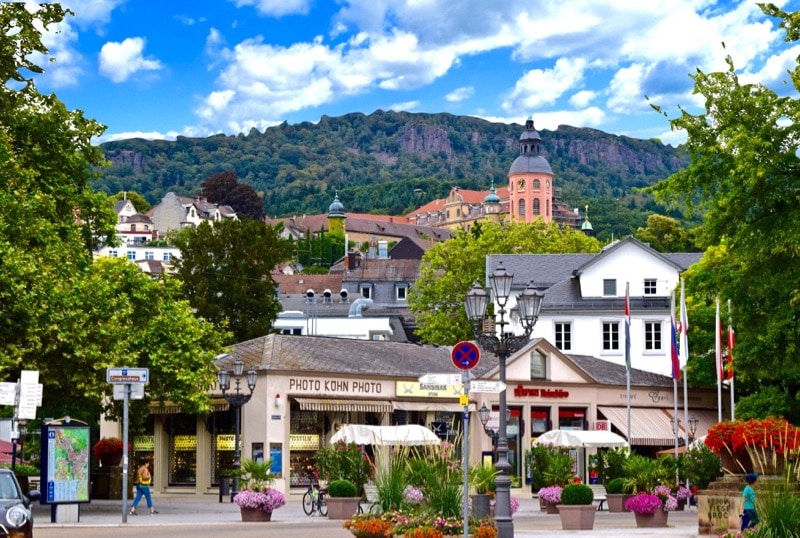 Germany’s most fashionable spa town is the perfect place for a romantic weekend. The town is located in the Black Forrest national park it’s a great base for hikers and nature lovers. But the main draw is, of course, the many thermal spas. These are fed by the natural mineral springs around the area which supposedly possess healing properties.

Once you’ve had your fill of the spa, head into the town to wander around the belle epoque style buildings, shop in some boutiques and visit the galleries and museums on the art and culture mile.

Lübeck is a hidden jewel in the north of the country. Situated on the Baltic Sea coast it was the Capital of the Hanseatic League from the 12th to the 17th century. It was heavily bombed during the war but much of the unique architecture survived or was reconstructed, earning it a place on the list of UNESCO World Heritage Sites.

Lübeck’s Altstadt  is characterised by impressive brink gothic  buildings, church spires and city gates. Aside from its architecture, Lübeck also prides itself on its martzipan , and you can enjoy a large number of products based on this sweet treat in cafes, sweet shops and bakeries around the city.

Freiburg is one of Germany’s warmest and sunniest cities, getting on average 1,700 hours of sunshine a year. It lies close to the French and Swiss borders on the edge of the Black Forest and the Altstadt is full of pretty gabled houses. The city became prosperous due to silver mining  and is also home to one Germany oldest universities,

For an excellent view of the city, a good place to sit is the beer garden on the Schlossberg  Around the city, you’re likely to stumble across streams known as  ‘Bachle ‘which run through the streets, but luckily if you do fall in one, they are not usually more than a foot wide and a few centimeters deep. The city’s sunny weather makes it a great place to visit year round, as in summer Freiburg hosts a wine festival  and in the winter there is, of course, a lovely Christmas market.