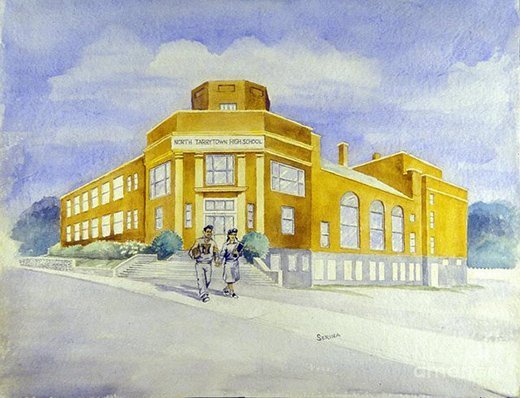 A class reunion is a time machine of sorts…

By: Scarlet Michaelson/The American in Italia

The closest invention to a time machine is perhaps the high school reunion. Going back to the campus where you went to school every day as a teenager and experiencing that strong sense of familiarity – even though years have passed since you last set foot there – is a unique experience. The motivation behind regular reunions is similar to what drives you to reread a favorite book. Every time you do it, something new reveals itself. Perhaps it’s the campus, or the characters. Same place. Same people. Yet nothing’s the same.

Attending my reunion in May, I saw people I’d known pretty well in high school whom I barely know now. I also saw people I barely interacted with years ago, but with whom I now share something I don’t share with anyone else in my life. Only now do I see how high school and college really are the formative years of adulthood in modern America. Or, to borrow from William Carlos Williams: so much depends on a red wheelbarrow.

The motivation behind regular reunions is similar to what drives you to reread a favorite book. Every time you do it, something new reveals itself.

Looking at old pictures, I am struck by how young we all were–yet, we didn’t know it at the time. My high school classmates and teachers were the last people to know me before a series of events that were my young adulthood: my parents’ separation and divorce, my father’s marriage to a woman to whom I’d never been introduced, my mother’s diagnosis with cancer, her illness and death, my father’s subsequent silent cross-country move with his wife, and my sister’s detachment from relations with remaining family, including first and foremost with me. High school friends and classmates– though several of them have already passed on due to accidents or illness– knew me when I was a different person. And in some ways, I miss that person.

In other ways, though, I don’t miss that person at all. She was a little too sheltered to appreciate the important things. She was envious of some of her friends for all the wrong reasons. She listened to her parents even when she might have been better off listening to herself. She hadn’t yet found her voice. But she was just a kid, after all. I forgive her.

Someone once asked me what the best moment or time period in my life has been so far, and it was such a strange question. They were looking for an answer like “high school,” “college,” or “my twenties.” But honestly, I’ve always felt like the best moment is usually right now, and sometimes yet to come. My best moments are whenever I’m with people I appreciate, or when I’m so highly involved in something– be it writing, hiking, or having a deep conversation– that I forget about the moment itself.

I also saw people I barely interacted with years ago, but with whom I now share something that I don’t share with anyone else in my life.

High school was a special time of big vicissitudes. I went from a small insular Jewish school to a much larger secular private school, from undemanding academics to rigorous college-prep level academics, from rudimentary elective and extracurricular offerings to sophisticated electives, sports, and arts offerings.

I adjusted to many transitions, and then it was time to change again. I went to a large public university near extended family in southern California, spent one quarter studying abroad in Mexico and right after that went to law school in northern California, a place I’d been curious about for years.

Life can go in so many different directions… and so much of it seems to be out of our control. I recognize that through it all– including some very tough times– I have become an adaptable, resilient, and empathic person.

Joseph Campbell said, “You must give up the life you planned in order to have the life that is waiting for you.” I’m not sure whether he meant to inspire a simple acceptance of that life, or a more whole-hearted embrace. Perhaps he meant a continuous dance between both.