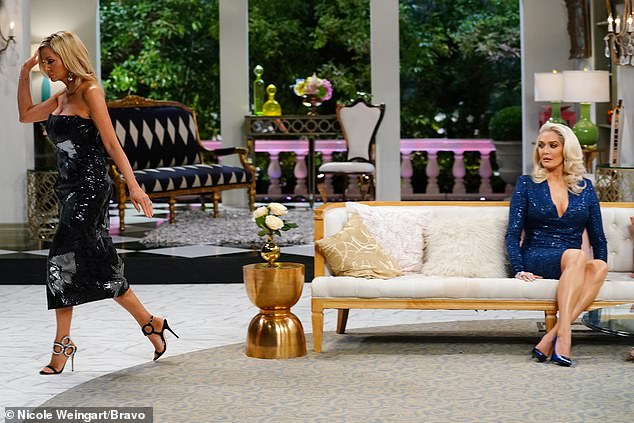 Season 9 The Real Housewives of Beverly Hills (Part 2) will go down in the books as one of the wildest rides in Housewives history.

There was more talk of  “Puppy Gate”,  Lisa Vanderpump absence, Lawsuits, but the real drama was courtesy of Camille Grammer (Meyer) who walked of the set, taking off her dress.

Brief Background: Camille Grammer Meyer was one of the original housewives in Season.  Her husband Kelsey (of TV’s Frasier)  encouraged her to join the series. While she was filming was having an affair with his now fourth wife.  By the end of season one Producer Andy Cohen said Grammer was the most hated housewife in the franchise. By the end of season two, Grammer alternated as a guest and friend in the Real Housewives of Beverly Hills.  Last October, she married attorney David C Meyer in Hawaii, their wedding was featured on the show.

The Reunion was filled with….

Andy Cohen, 51, said that viewers often felt the cast had gotten caught up in Puppy Gate in order to keep the focus off their own scandals, financial and otherwise.

Andy Cohen read a comment card:  ‘I guess Kyle Richards isn’t going to mention her husband Mauricio scamming someone out of $37 million.   A very angry Kyle….. ‘My husband did not scam anyone,’ , saying it was a claim based on a $36 million property. ‘The way that it is worded is damaging, and I don’t appreciate that. 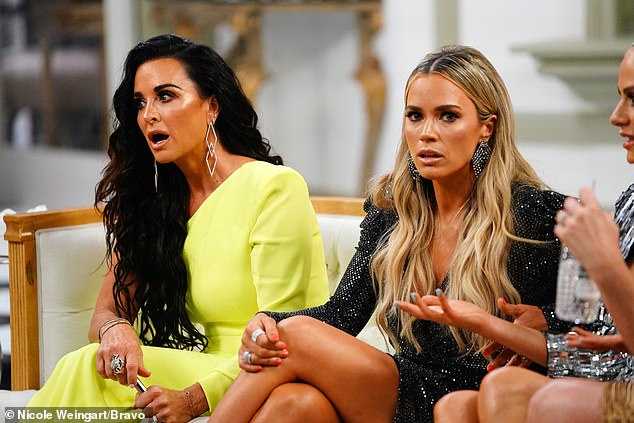 Andy noted when the cast was in the Bahamas, a stranger had harassed Dorit about a lawsuit filed against her swim label, Beverly Beach. He asked her castmates why they didn’t bring it up. ‘We didn’t want that to come out and hurt Dorit and [her husband] PK,’ said Kyle. ‘It had nothing to do with us as a group.’

A viewer said: Erika’s happy to talk about Lisa Vanderpump all day, but when it comes to [her husband] Tom defaulting on a $15 million loan.  she doesn’t say a word,’  ‘Resolved, and they apologized,‘ “Erika Jayne Cool “

Dorit was asked, why didn’t she just give “Lucy Lucy Applejuicy back to Vanderpump Dogs instead of handing her to a friend.  Lucy was never in danger of being killed,‘ Dorit added, as it was pointed out that she had not gone to a ‘kill shelter.’ I believed she was going to a loving home,‘ Lisa Vanderpump had known and ‘was not only okay’ with it, she never once told her to do otherwise. 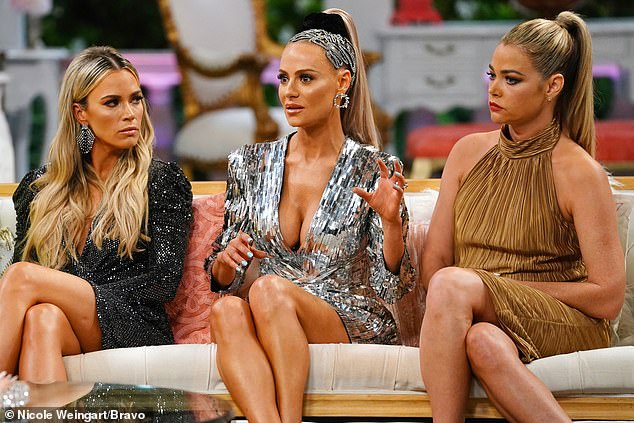 Are you anorexic? What have you had done?

Andy asked the women about the pressures of staying young thin and sexy in Beverly Hills.

In this season we learned that Kyle Richards struggled to be thin as a child actress.  Some days she would eat six almonds a day.   Denise said she lost a job a few years ago for being too thin.   But it was just leanness brought on by carrying her young daughter Eloise, now age eight, around all the time

Lisa Rinna was asked if she was anorexic,  Rinna said she hadn’t gained weight since she was 20, and had discussed it in therapy: ‘I’m not bulimic. I don’t believe I’m anorexic.’

Lisa Rinna, whose daughter Amelia struggled with anorexia, said a therapist told her husband, Harry Hamlin, to ‘shut the fuck up’ and listen to the 18-year-old model. Rinna, 56, said people sometimes told Amelia: ‘You don’t look like you’re anorexic. You’re not that thin,’ which she called ‘a really big trigger.’

All the housewives seemed frustrated by the public’s fascination with their plastic surgery,or lack thereof.  Erika said, ‘I hate it when people say, ”What work have you had done?”’ . ‘What work have YOU had done?’   Everyone was so judgmental, she noted. ‘Oh, if I had a nose job, I’d look like that, too,’ Erika imagined them saying. ‘Well then go fucking get one.

Camille Grammer (Meyers) a friend to the show entered during the second half. Hurricane Camille attacked nearly everyone on both sofas.  The queen of two faces, kicked in the fourth wall, possibly exposing Bravo secrets. Her tongue also sparked fights among some of the housewives.  When the ladies caught their collective breathes and hit back, she said it was a set up and stormed across the set, taking her clothes off as she exited. 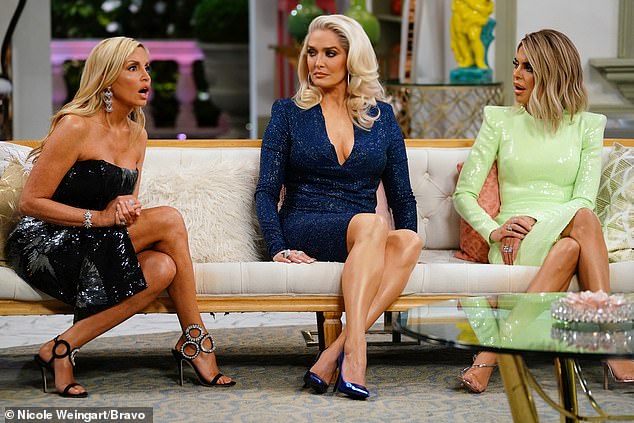 The friendship between Kyle and Teddi has grown close this season.  Camille said it was creepy.  ‘I just felt that Teddi was up Kyle’s ass,’she noted of a Tweet she had written to that effect.    Teddi come back with…. ‘And asking Kyle to be your bridesmaid when you don’t hang out outside of the show isn’t creepy?’   Camille: We were old friends, but ‘I haven’t seen her much this year since you put yourself into her life.’

When Andy asked Camille why she thought Vanderpump skipped the reunion.

Camille theorized that it was because she was ‘pissed’ at former cast mate and friend Brandi Glanville, 46.   On a previous episode, Brandi told Denise that Vanderpump had a ‘hotline’ to ‘Radar Online,’ and had leaked information about her cast mates to the publication.     ‘She’s her arch enemy and she feels so betrayed,’ Camille said. ‘She felt throughout this season that you had her back, Denise, and with you talking to Brandi…‘

Camille admitted that Vanderpump had been ‘so angry’ with her for previously insulting her ‘receding’ gums on the show, but that she still texted her recently.

She later accused the other women of also laughing about Vanderpump’s breath and appearance.   Camille outed Kyle who has talked about her former best friends breath, off camera.

‘We’ve all said things privately about each other,’ Kyle said,. ‘If I would out you right now, it would be a very bad situation. I don’t do that.’

The women clapped back at Camille for insulting Vanderpump with one hand, then praising her to the press with the other.  ‘You girls have all talked about each other behind each others’ backs,’ Camille said. ‘I mean, c’mon.’

‘This is hypocrisy at its finest right now. You have all wanted me to be mad at Lisa Vanderpump.’  ‘You’re trying to please everybody, and you end up pissing everybody off,‘ Kyle pointed out.

‘I feel like you girls want me to jump on that hate train,’ Camille.  Dorit:’You do a good job on your own, jumping on your own hate train,’  ‘Dorit, you’re the most phoniest person I ever met,’ Camille said.

Erika asked her how Dorit was phony.   ‘I just have a thing about her,’ Camille shrugged. ‘I don’t like when people pretend their something they’re not. It really drives me crazy.‘  ‘I’ve been around this town for so long, and you show up, and… I don’t know, it’s just something about you, Dorit—I just don’t feel you’re sincere at times.’  Dorit: ‘Don’t pretend that you like me, and that you want to be friends,’ ‘And invite me to such big moments like your wedding, and your 50th birthday.’        ‘Well, that was production,’ Camille said.

Camille claimed that Dorit was the ‘phoniest person I’ve ever met’  ‘That is the truth, because I didn’t want to invite any of you ladies to my wedding,’ 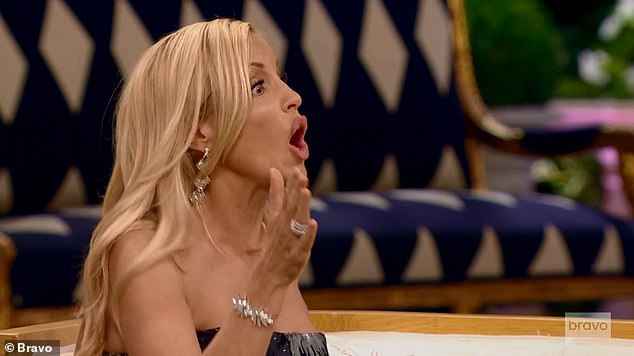 ‘Hold on,’ Andy replied. ‘You have power over yourself.’

Camille then called the women nasty for gossiping about her in the van to the airport after her wedding, which they did after seeing her praise Vanderpump to a magazine.l

Camille: ‘Why can’t I say a nice thing about Lisa Vanderpump without the Witches of Eastwick coming after me?‘

Kyle:‘We’ve left our families and children to be there and support you whether you actually wanted us there or not,’  .

‘Why are you so angry?’ Denise asked.

‘Don’t tell her to shut up, Camille, she’s my friend,’ Rinna said. 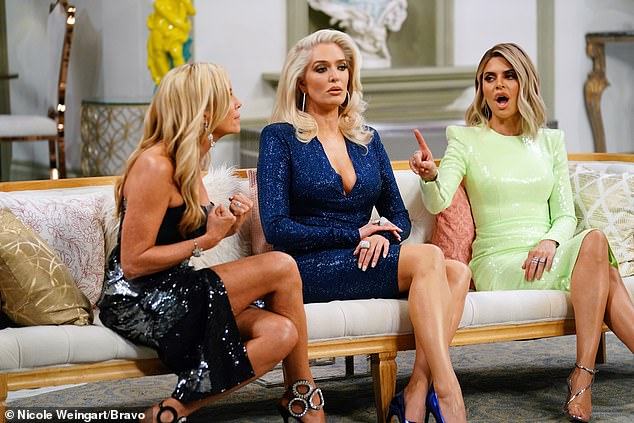 ‘I know she’s your friend, but I don’t like her,’ Camille responded.

What is Wrong With You ! 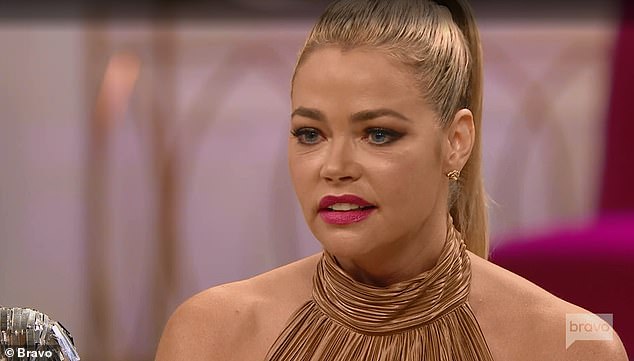 Camille  brought up an incident that occurred after her wedding, when Teddi allegedly shunned her daughter Mason at the airport.  Denise had told Camille to work through the incident with her daughter, which she misinterpreted.  Denise, told me to tell my daughter, she was a fucking liar!    Camille went on to say that Denise had told her she cursed at her own daughter.     In a video of the discussion, Denise did say that she screamed at her kids sometimes, but not that she cursed.

‘Camille, what is wrong with you?’ Denise asked. ‘Honest to God, you need to go take a second, because this is not good.’

Camille stormed off set saying it was a set up!

I’m not sure the next (last) Reunion will be as intense as this one.

But I know where Ill be next Tuesday