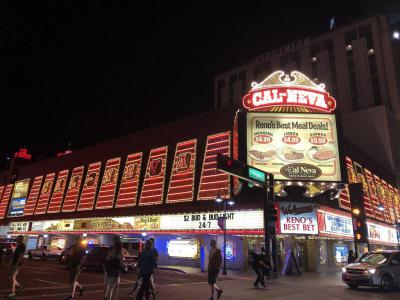 The glory days of Reno as gaming city has long past. For years RENO was the destination for gambling and  by the mid 50’s  the city was surpassed by Las Vegas as the largest gaming destination in the United States.

There are more closed hotels and casinos on Reno’s Virginia Street than open. On the corner of Second and Virginia is the Cal Neva Casino.  Best known for its one dollar beer its $5.99 prime rib dinner.   The nearly sixty year old Casino is like an old worn and comfy sofa.   It isn’t special, not much has been done through the years to change its overall appearance, but its familiar.

Its Wednesday afternoon,.patrons who enter through the Virginia street side of the casino are greeted with the a few of the newer machines, as you walk further into the casino most the machines are fairly old..  I’m the only patron in one area of casino.   There is a worker casually cleaning every other machine and seems to be looking out for someone, a supervisor I suppose.    I settled into an oldie but new to me machine, the buttons on most of the lower part of the machine are filled with cigarette ashes.   What I couldn’t blow off, I wiped off with a clean napkin lying between machines.

Some of the machines have a story.  This particular machine is of a beautiful blackmailer, the more prominent the person, the greater the payout. With the judge and a city council member being  the most valued.   One by one, they would line up on the screen.  With my five penny bet, a screen full of judges would pay out $75.00 dollars, and with a maximum bet of a dollar, I could win two thousand dollars.

Minutes seemed like minutes and my portfolio grew to fourteen dollars and when it dwindled down to eighty five cents it was time to go.   Walking around ground floor of the casino, I was one of less than a dozen people.    The second floor was livelier, there were quite a few people in the sports booking area and more people playing on slot machines upstairs than down.   Far and away the busiest place in the casino. was the restaurant.  Opened face sandwiches with a ton of fries for $2.99 and of course the $5.99 prime rib dinner with all the fixings.   A lot of the patrons are regulars, locals and tourist who  have known the wait staff for years.   The area was lively and filled with laughter.

The Cal Neva is the place, where its comfortable, its not pretentious .  It a place where  some of the regulars are greeted by name, a place when locals can just chill.   The food at Harrah’s, (my hotel across the street)  wasn’t much better than Cal Neva’s at triple the cost. So I became a regular and when I sat down for dinner, someone said, “are you having Chicken Parm or the prime rib? (Well damm!!!! I said to myself, I could want the pork chops, stay out of my bizness! )   I smiled,  prime rib to go…with mashed and fried potatoes…  After I paid for my to go order, the girl said, see you tomorrow big guy?   Maybe not tomorrow, but you will see me again…….