It early Wednesday morning at Cesar Chavez Park Downtown.  People are settling up for the Wednesday’s Farmers Market in the Park.   A few booths are set up.  Near the 9th and J Street Entrance, is a booth of fresh fruits , on the other side people are arranging fresh flowers .  Big Dogs is setting up their Barbecue Pit .  The Red Kettle Corn Vendor near the 10 and I street Entrance seems to be the first vendor to set up. Tempting unsuspecting office workers to its lair. The scent is intoxicating.

Every Wednesday, I’m tempted.   Its not a cheap snack.  $8.00 or $10.00 and they take every form of payment known to Jimboy’s Tacos.    I sat down on bench  on the tenth street side or the park  contemplating a bag.

There is always  entertainment in the park in the mornings.  Usually on near J or I street.    On this day, there is a man wrapped in a blue blanket with a box cutter in his hand.   He is chasing another man, calling him names that held my attention.    As the two circled the park, he said he was just released from the hospital earlier that morning and he has no problem cutting a bitch (I’m assuming the man without the blanket and box cutter is the bitch in question!)

Few people were interested in the drama  as the two circled  the park, occasionally going into the street.   I really don’t need kettle corn., its not in the weight watchers guide. I have fruit at home. But it would be nice to have the Kettle Corn while watching Perry Mason on Me tv.

Meanwhile with all the traffic entering the park.  The potential victim had many option  to escape but he chose  to run clockwise in the park. I grew tired of the endless chase.

I bought some fresh ginger from one of the vendors and a large bag of Caramel kettle corn which went well will Perry . (I see you Della Street) 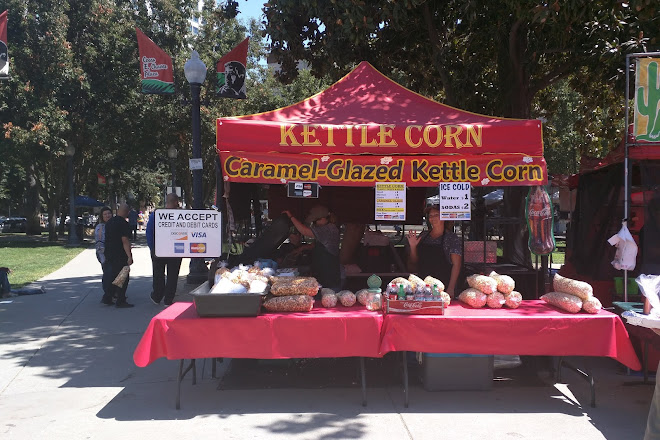