My father, even in death, is teaching me that grief doesn’t have to overshadow joy. 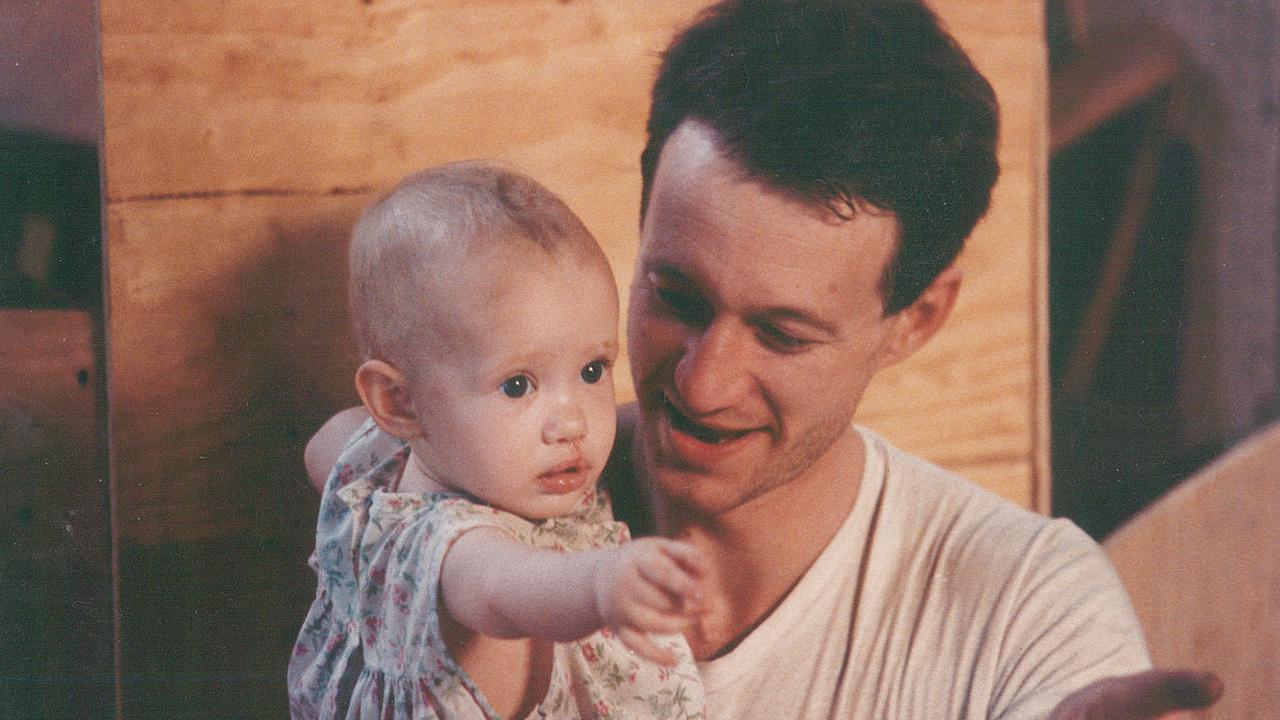 When I thought about the part of a typical wedding reception where the groom dances with his mother and the bride dances with her father, I seriously considered not having a reception at all. I came home crying one night, revealing to my fiancé that through all of our wedding planning, part of me had been dreading having a wedding without my father there. I didn’t know how to explain the guilt I felt about starting this whole new chapter of my life as an adult who he didn’t live to meet. “I know it’s not logical,” I prefaced. “But it kind of feels like leaving him behind.”

The last time I saw my father, when I was eleven years old, we said goodbye after a weekend together at a diner called Hamburger Mary’s. I had a grilled cheese and a chocolate milkshake, which I drank as slowly as possible to extend our visit by just a few more minutes — I hadn’t seen him in almost six months, and I didn’t know when I would again. 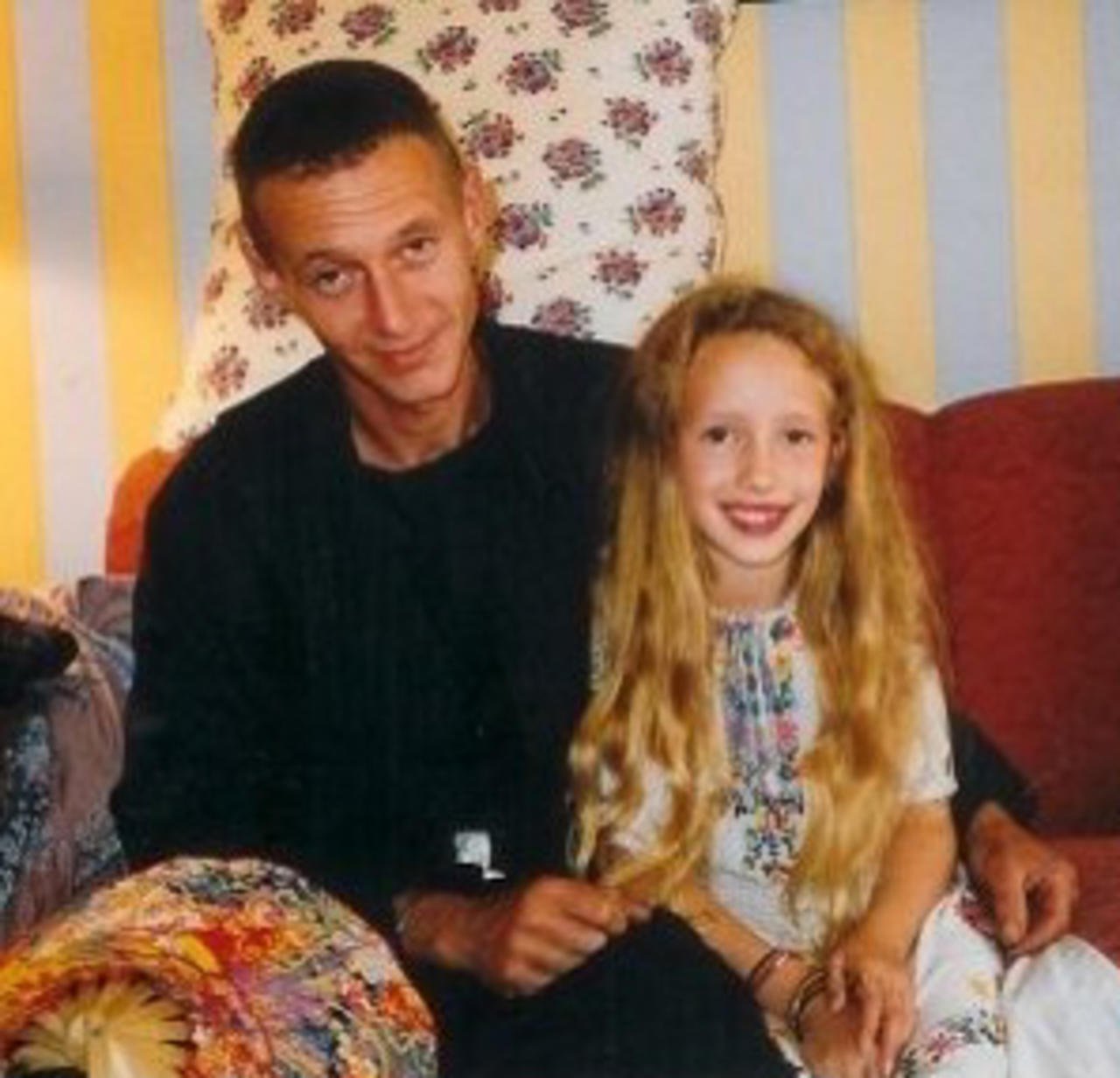 When my milkshake was gone and it was time to go, I broke down. I cried and held onto fistfuls of his shirt like I had when he first told me that he wasn’t going to be living with us anymore. Those two happy days had healed the wound of my parents’ split just enough for this departure to rip it back open. I had no idea that this would be the last time I’d ever see him, but something in me must have had an inkling, because I cried like I knew it was our last goodbye. I cried not just for the end of that perfect weekend, but for the next week, when we’d be back in different cities, on opposite sides of the country. I cried for the coming summer, when I’d eat ice cream alone and wish he was there walking and joking with me. And for when I went back to school that fall and felt like I was being talked down to by teachers who didn’t know nearly as much as my brilliant father, and he wasn’t there to validate my superiority complex.

He started a letter to me during his four-hour bus ride home after our goodbye at the diner. He encouraged me to not let adolescence shrink me: “stand up and be proud,” he wrote, warning that young girls — “do you prefer young women?” he asked in parenthesis — sometimes hide their intelligence to avoid drawing attention to themselves. “Never be embarrassed by your ability to make just the right sentence, with all of the exact words you wanted and needed.”

By the time that letter made its way across the country to our mailbox in New York, he was dead.

Those last words of fatherly praise and advice suddenly became as precious as Moses’ tablets; words from beyond, all there would ever be.

In preparation for my father’s funeral, I asked my mother to take me to buy some black clothing. We went to Macy’s, and I got not only a nice dress for the service, but enough black separates to wear for an as-yet-undetermined mourning period. That period transitioned so seamlessly into my adolescent punk phase that I’m not sure when or if I decided it was over, but either way, I wore all black pretty much every day for almost a decade. Consciously, it was because I liked Joan Jett while my classmates liked J-Lo and I wanted to make it clear that I was “different.” But looking back, I was very clearly in mourning for my entire adolescence.

I was an angry teenager; I dropped out of high school, chugged cheap vodka out of plastic bottles, and fantasized about the apocalypse. My life philosophy revolved around the fact that I didn’t plan to live past my twenties, so it didn’t matter if the drugs I took were cut with all kinds of toxic chemicals or if a fourteen-year-old girl really shouldn’t walk alone on Avenue D at three in the morning. I smoked cigarettes not in spite of the fact that they’d shorten my life, but hoping they would. I made friends with the homeless people in the park because their level of motivation and engagement in society matched mine more closely than anyone else I could find.

My mother occasionally tried expressing to me that I should cut her a break because she now had to be both my mother and my father. I was deaf to any suggestions of sympathy for her, but she was right. She had to be the bad cop without a good cop to play off of — no wonder I hated her then. 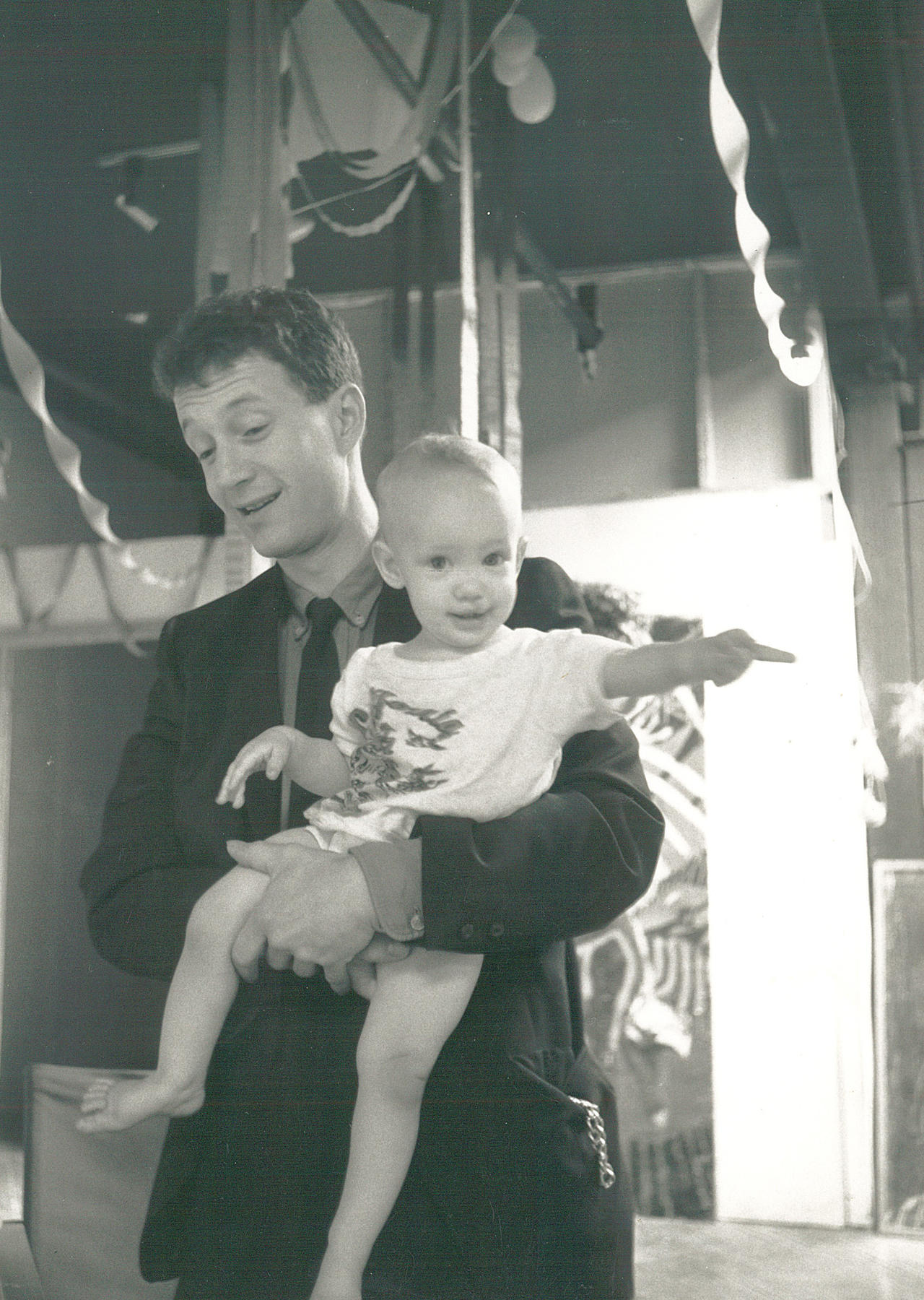 Lilly being held by her father.

As long as I was depressed and surly, my father was still close to me. That’s why so much of mourning is guilt. Of course there’s guilt for everything left unsaid, guilt for not making the most of the time you had, but the bigger, deeper guilt is for every moment you have after they’re gone. The idea of survivor’s guilt isn’t just about feeling unjustly lucky to have lived while someone else died; it’s guilt for going on without them, guilt for changing and growing and becoming a person that they never knew. Any milestone is tinged with their absence, any joy feels like a betrayal, like you’ve forgotten them, if only for long enough to laugh at a good joke or enjoy a good meal. But as long as you’re in mourning, your life is still about them, and in that way, they’re still there.

When the communal, outward mourning ends and life appears to go back to normal, that’s the worst part — when the world goes on, not noticing the gaping hole that’s been left. It’s how we put together a new role for ourselves in this irrevocably damaged world that shows how we really grieve — much more than those first few days of sobbing.

I stopped wearing all black at some point in college, but a part of me held onto that sadness that had kept my father close. But planning a wedding, being deliriously happy and in love, there was no denying that I was moving on. In order to fully enter this new life, I had to let go of some of my grief, but I didn’t know how to do that without feeling like I was letting go of him, too.

The night that I came home crying and tried to explain to my fiancée all of the guilt that’s woven in with grief, I realized I was living that future I had cried for, that life I didn’t want to have without my father. That future was happening, and it was bringing his absence into relief all over again. When someone dies, the sadness we feel becomes the last tangible way they affect our everyday lives. It becomes enmeshed with the idea of their presence. We let it hold us back because a part of us wants to stay in the past, where we existed with them.

My future wouldn’t truly start until my mourning had ended.

So, despite the intrinsic sadness of having a wedding reception without him, I decided to have one. As central as my grief is to who I am as a person, I couldn’t let it overshadow the excitement and joy of finding someone to be happy with, someone who makes me excited about the future again — I am living a life that is about something other than mourning, and I will wear white at my wedding. But that doesn’t mean that I’ll ever forget my father. 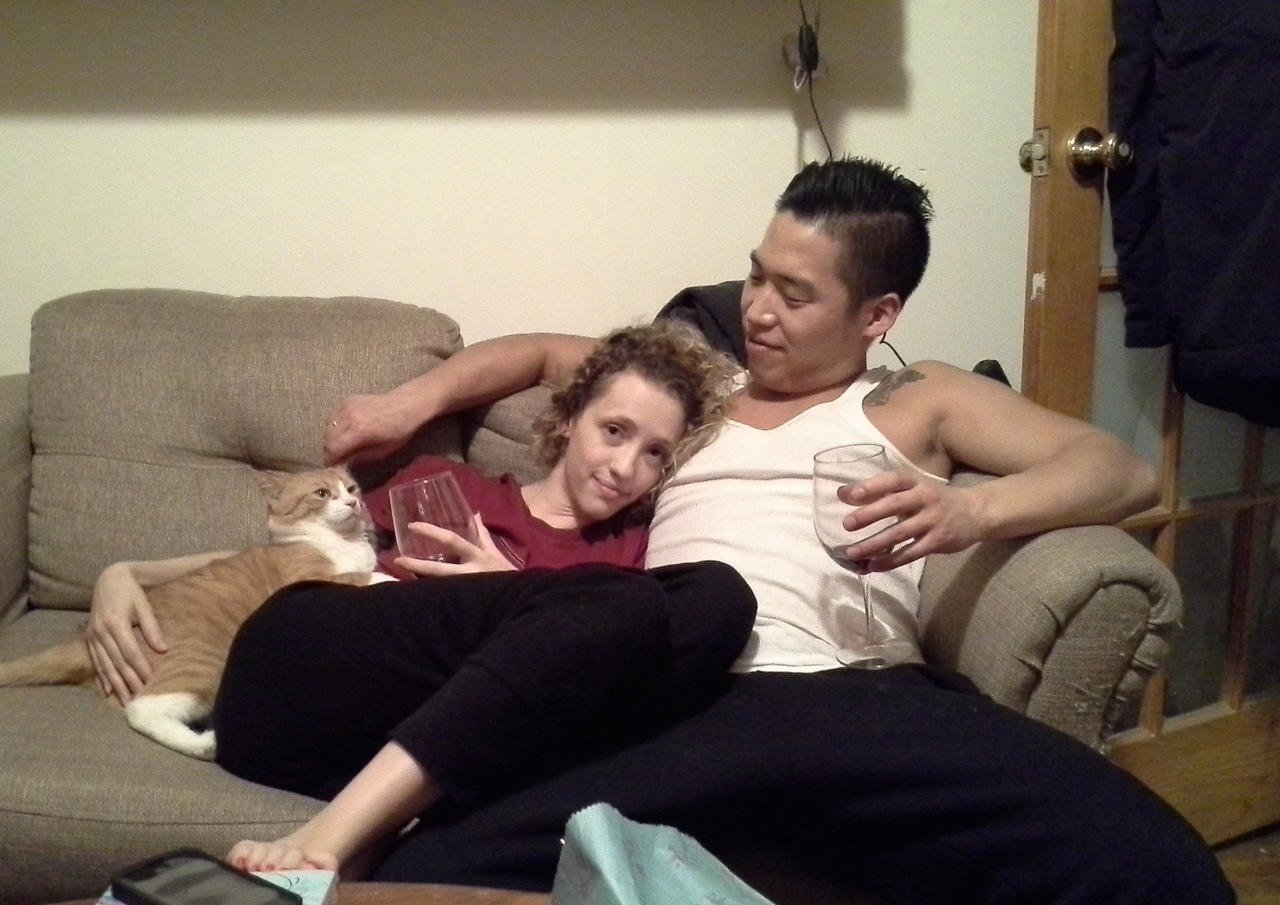 Lilly and her fiancée at their apartment in 2014.

I thought that a good place in the ceremony to acknowledge him would be in my walk down the aisle — the biggest father-of-the-bride moment.

If I walked down the aisle alone, it would be like yelling “look at me, I don’t have a father!” It would call attention to his absence in a sad, empty way. But if I asked a friend to step in, even one of his close friends, it would feel like glossing over the fact that my father wasn’t there, acting as if it was OK.

Asking someone to walk you down the aisle is laden with almost as much significance as the marriage proposal itself. Asking someone to “give you away” is telling them that they are the chosen representative of your   past life, of the family that you’re leaving to start your own, of everything you came from. Once I really thought about it that way, it became glaringly obvious that the only person who could really represent my entire family is my mother — since she is my entire family.

Of course she’s the one who will walk me down the aisle. No stand-in would do. Having my mother be the one to give me away is a way to finally recognize how hard it was for her to raise me by herself. It’s also the best way to acknowledge both my father’s absence and the fact that life continues in spite of it: the remaining members of our family standing there, without him, but with each other, living on, even happily.

Lilly Dancyger is Narratively’s Deputy Editor, and a freelance journalist and essayist with bylines in Rolling Stone, Glamour, Playboy, and more. She teaches personal essay writing at Catapult, and is the editor of Burn It Down, an anthology of women and non-binary writers on anger, forthcoming from Seal Press.