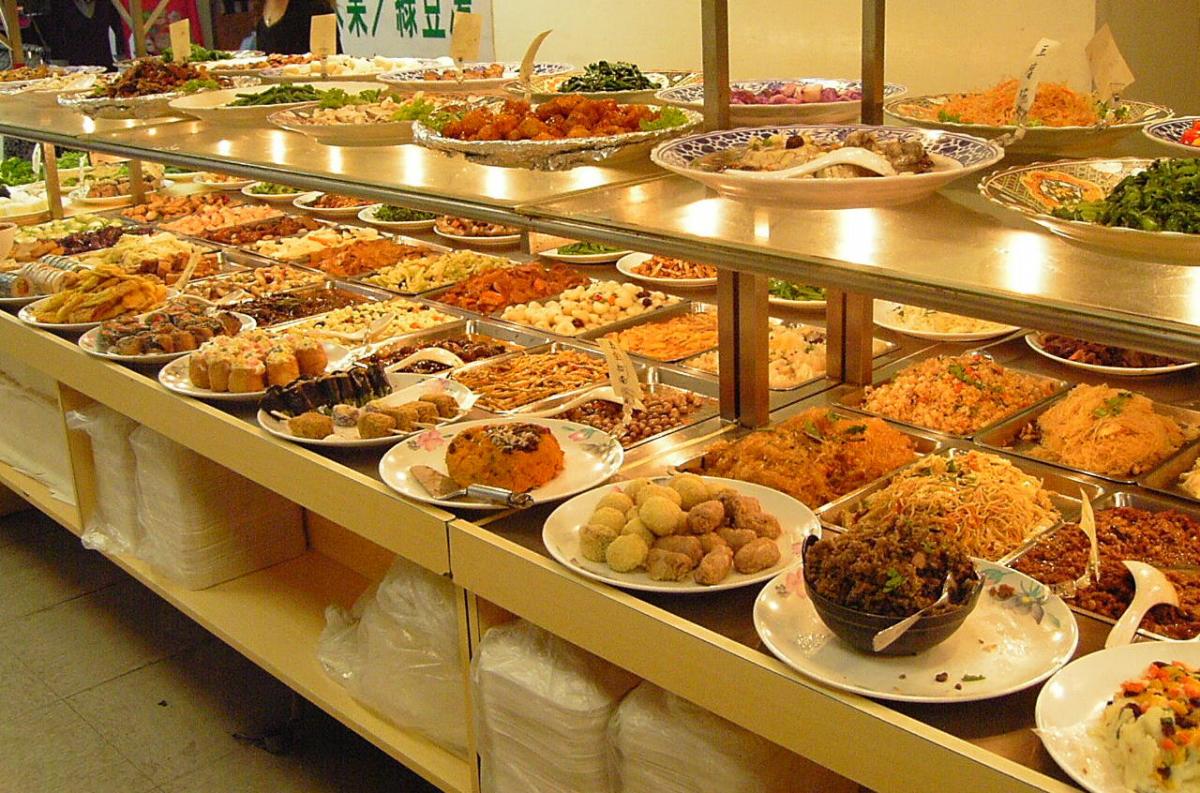 For a small fee, you’re granted unencumbered access to a wonderland of gluttony. It is a place where saucy meatballs and egg rolls share the same plate without prejudice, where a tub of chocolate pudding finds a home on the salad bar, where variety and quantity reign supreme.

“The buffet is a celebration of excess,” says Chef Matthew Britt, an assistant professor at the Johnson & Wales College of Culinary Arts. “It exists for those who want it all.”

But one has to wonder: How does an industry that encourages its customers to maximize consumption stay in business?

To find out, we spoke with industry experts, chefs, and buffet owners. As it turns out, it’s harder to “beat” the buffet than you might think.

How a $20 buffet breaks down

When you go to an all-you-can-eat buffet, you pay a single fixed price regardless of how much you consume. It doesn’t matter if you eat 1 plate or 10 plates: Each bite incurs an extra marginal cost to the restaurant, but no extra cost to you.

We analyzed the prices of 30 all-you-can-eat buffets across the country, taking into account a variety of factors: Geographic region, size of the buffet (independent vs. chain), time of day (lunch vs. dinner), day of the week (weekday vs. weekend), and age (children and seniors often get discounted rates).

All considered, our analysis yielded an average buffet price of ~$20.

Like most restaurants, buffets operate on extremely thin margins: For every $20 in revenue, $19 might go toward overhead, leaving $1 (5%) in net profit.

Buffets often break even on food and eke out a profit by minimizing the cost of labor.

Self-service allows a buffet to bypass a wait staff, and all-you-can-eat dishes (which are generally less complex and prepped in enormous batches) can be made by a “skeleton crew” of line cooks.

“At a typical restaurant, a cook can service 25 customers per hour — and that’s at best,” says Joe Ericsson, a managing partner at the food consultancy Restaurant Owner. “In the same amount of time, a single buffet cook might be able to prep enough food for 200 people.”

Because margins are so slim, buffets rely on high foot traffic: At Golden Corral, a buffet chain with 498 locations in 42 states, dining floors are 5k-square-feet and seat 475 people. On a typical Saturday, it’s not uncommon for 900 diners to come through the door.

The volume of food required to satiate 900 all-you-can-eaters on a daily basis can be staggering.

Each year, Ovation Brands, the owner of multiple major buffet chains, serves up 85m dinner rolls, 47m pounds of chicken, and 6m pounds of steak — 49.3B calories in total.

It is estimated that between 5% and 25% of any given dish will be wasted, either through the buffet’s miscalculation of demand or the diner’s overzealousness. Waste reduction is a key focus of any successful buffet and a frequent tactic is reusing food.

“Buffets have always been a landing spot for food scraps,” says Chef Britt. “They call them the ‘trickle-down specials’ — day-old vegetables or beef trimmings can be repurposed into a soup or a hash.”

Buffets are also able to save money by utilizing economies of scale and buying food in bulk. Using data from a wholesale food supplier, we worked out the approximate cost per serving of a few popular buffet items.

Fully prepped, starches like potatoes might only cost the restaurant $0.30 per serving, compared to $2.25 per serving for steak.

By nature, buffets attract the very customers they wish to avoid: Big eaters with insatiable appetites. Buffets seek to “fill the customer’s belly as cheaply and as quickly as possible.” To do so, they employ a number of research-backed tricks to get people to eat less food:

Even higher-end buffets, like the $98 brunch at the Hotel del Coronado in San Diego, employ these tactics: “They hide the truffles, the foie gras, and the oysters,” says Britt. “You literally can’t find them.”

But what happens when a customer ignores these tricks and devours a Godzilla-sized portion of food? Is it possible to — dare we ask — out-eat the all-you-can-eat buffet?

Buffets and the law of averages

Let’s imagine that Larry, a 280-pound offensive lineman, decides to stop by his local all-you-can-eat buffet after a big game.

Larry’s got a reputation around town for being a gourmand. He’s got an appetite that puts Homer Simpson to shame — and on this particular day, he’s ready to do some serious damage.

Larry pays his $20 and proceeds to eat 5 servings of steak and chicken, far more than the average customer.

The cost of this food to the buffet amounts to $16.90. This means that after factoring in other expenses, Larry has handed the restaurant a loss of -$8.50.

Luckily, eaters like Larry (“vacuum cleaners,” as one buffet owner calls them) are baked into any all-you-can-eat buffet’s pricing model. While the buffet might lose money on a small number of meat gluttons, it handily makes it back on those who under-consume or only eat the cheaper foods.

“Most people don’t go in and beat the buffet,” says Britt. “They eat an appropriate amount, or even less than they should, averaging out the outliers.”

By :Zachary Crockett / The Hustle

While the restaurant loses $8.50 on Larry, it makes $3.70 from the under-eater and still takes in its steady $1 margin on the average eater.

And there are a lot more of the latter two patrons: The buffet owners we spoke with estimated that over-eaters like Larry only account for 1 in every ~20 diners.

Buffets don’t stop there: Many beef up their margins by selling soft drinks separately. At a cost of $0.12 per fill, a $2 soda comes with a 1,500% markup.

Still, buffets aren’t impervious to extreme circumstances. Larry won’t put a significant dent in a buffet’s bottom line — but imagine if he brought the rest of his team with him.

Every buffet owner we talked to had a few war stories about dealing with policy abusers. “All-you-can-eat,” it seems, comes with certain limitations.

“There are people who go to a buffet and eat for 3 or 4 hours straight,” says Anna Hebal, owner of the Red Apple Buffet in Chicago. “They’ll go to the bathroom, then come back and eat again. They don’t stop.” She has since imposed a 2-hour time limit.

Other proprietors have taken more extreme measures. Over the years, buffets have made headlines for kicking out guests who eat too much:

To avoid these situations, some owners have updated their language to “All-you-can-eat within reason,” or resorted to charging customers extra for food left on plates.

But the real enemy of the buffet isn’t the occasional over-eater: It’s the steady march of technological progress, and the changing consumer preferences that have come with it.

The end of the (buffet) line

In the past 20 years, more than 1.3k buffets have shut their doors. The big buffet chains that once dotted the Midwest have been hit the hardest: Old Country Buffet is down to 17 of its 350 original locations; HomeTown Buffet has closed 217 of its 250 eateries; Ryan’s Buffet has downsized from 400 to 16.

Ovation Brands, the conglomerate that owns these chains, has filed for Chapter 11 bankruptcy 3 times since 2008.

Industry experts attribute this decline, in part, to the spread of food delivery apps. By 2030, the National Restaurant Association projects that 80% of all restaurant items will be eaten at home — a trend that buffets can’t effectively capitalize on.

Today’s health-conscious consumers have also shifted away from quantity in favor of experience-driven dining options.

Golden Corral, one of the last-standing American buffet chains, has found success by redesigning its dining spaces to be more “bright, shiny, [and] friendly,” and investing in higher-quality food that makes for better Instagram photos.

Anna Hebal, who runs a small buffet in Chicago, has a different strategy.

For 30 years, she has served guests a Polish-themed spread that includes kielbasa, schnitzel, and pierogi. Her secret? Sticking to the roots of what first made buffets popular in the 1970s: excess and variety.

“A buffet is just like life itself; you have so many choices,” she says. “It’s up to you to choose wisely.”