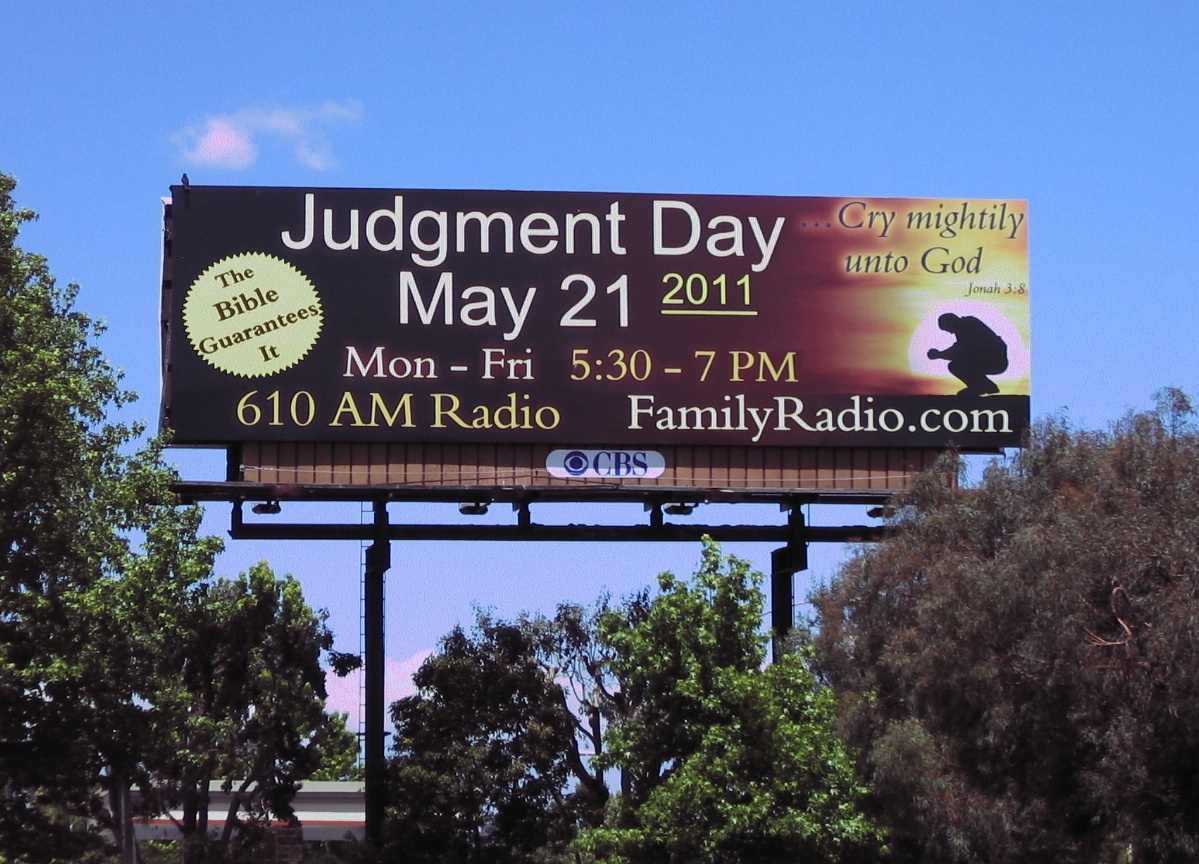 I’m not an alarmist by nature. You won’t find me screaming “the world is coming to the end” on I street , or fighting over a twelve pack of Ultra Charmin Toilet Paper at the Alhambra Safeway.

I’ve survived the Loma Prieta Earthquake, Y2K, Sars, Swine Flu , The Ebola Virus and Mr Harold Camping’s of Family Radio prediction that the world would come to an end May, 21,2011.

I understand the fear that follows after watching hours of  CORONA VIRUS seeing the numbers marching towards your town.  People are forgetting to breathe. Many of us aren’t applying logic to the information in front of us.   This isn’t the first time.   Many people were convinced the world was going to end and  sold their homes and everything they owned before May 21st 2011.  Nearly sixty years ago, before cable news, Americans beliving there was going to be a nuclear war between the United States and Russia built underground bunkers  filling them with food.

In the last few weeks, friends sent me pictures of near empty store shelves in supermarkets from Massachusetts to Texas.   In Sacramento, it was business as usual,  there weren’t any shortages of any kind at  BelAir and Safeway..

Try as you might, you cant escape the Corona Virus. If you turn off all electronic devices, your phone, the TV, radio and social media someone will bring it up. Vice President Pence and President Trump tries to calm the nation and the Stock Market. Meanwhile, I think I have a cold or could it be Corona Virus?  Its possible. as I frequently come in contact with travelers

This is usually the beginning of something bad.

After saying the Corona Virus is a hoax, and blaming the Chinese, then the Europeans and the virus will be a distant memory by April.  President Trump attempts to reassure the nation: “With approximately 100,000 CoronaVirus cases worldwide, and 3,280 deaths, the United States, because of quick action on closing our borders, has, as of now, only 129 cases (40 Americans brought in) and 11 deaths.”

A cold dammit! My son and I planned a road trip earlier in the week and I didn’t want to cancel . A trip to the Alhambra Safeway, for Juice and supplies.

President Trump: “We did an interview on Fox last night, a town hall. I think it was very good. And I said, ‘Calm. You have to be calm. It’ll go away.’ ”

A break from the madness, just Austin and I  in downtown Chico. The soundtrack was our voices, and laughter. No discussion about the Virus today. A great burger at “Madison Bear Garden” in downtown Chico and a walk through downtown. I can feel myself sinking. Fluids…. A detour into Paradise, where life is slowly returning to normal. Locals  are returning and reminded of the fire.  Every tree is scorched and the persistent smell of chard trees is everywhere.   Returning to Sacramento, my body is weak. Arriving home I take my temperature 102.3

I should stay home, but after 17 hours of sleep. I’ll go into work tonight.

Work was a blur, I don’t member much, sitting was difficult standing difficult. Uber home and turn on the news. Italy is taking drastic measures

The President is downplaying the virus and the stock market isn’t pleased after telling Americans: So last year 37,000 Americans died from the common Flu. It averages between 27,000 and 70,000 per year. Nothing is shut down, life & the economy go on. At this moment there are 546 confirmed cases of CoronaVirus, with 22 deaths. Think about that!”

This is a long ass cold. Usually after a couple of days its over. My TV was background noise. Every time, I wake up, its more Corona Virus, more US infections.

What world is the President living in? “And it hit the world. And we’re prepared, and we’re doing a great job with it. And it will go away. Just stay calm. It will go away.”

A woman in her 90’s died at an Elk Grove nursing home, she was the first person to die of the Corona Virus in Sacramento.  New Corona Virus cases rose by 15% overnight in California.

It’s just a cold….. At least I want it to be. I don’t want to go into Kaiser, where they are probably treating hundreds of people ,who are really sick. But is this a cold?   I called Kaiser’s Advice Nurse.  I was feeling guilty as the hold times were much longer than normal. Just as I was about to hang up, the advice nurse came on. After a dozen or so questions ,she asked about my pain levels, which were low. With my preexisting health issues, she insisted that I immediately go to the ER.

At the Kaiser Morse Emergency, it wasn’t as busy as I expected. Masks and hand sanitizer was mandatory. Earlier in the day the President was still attempting to paint the virus nothing to worry about as he said I think we’re going to get through it very well”

There were x-rays, EKG’s, painful nose swabs, and other tests.  To pass the time between tests, I watched tv on my cell phone.

Suddenly it got real.  The National Basketball Association suspended the season, during a game between the Dallas Mavericks and the Denver Nuggets.  One NBA  player tested positive for the virus. This is unheard of… Meanwhile what I thought was a cold was actually the flu.

Meanwhile, as I was waiting in emergency, A young lady instructed her son to bring her the bottle of hand sanitizer everyone was using. Sitting across from me she attempted to hide the container/

Thursday, March 12: This shit is real!

Kaiser, advised me to stay home for a few days, possibly longer.

The President: It’s going to go away. … The United States, because of what I did and what the administration did with China, we have 32 deaths at this point … when you look at the kind of numbers that you’re seeing coming out of other countries, it’s pretty amazing when you think of it.”

School districts all over Sacramento announced they were closing until April. Local events, with 250 or more people were cancelled in Sacramento, including events at Golden One.

Friday, March 13: Everyone is affected!

I was sent home with new drugs and an inhaler. In 24, hours, I felt much better. But there was a feeling a dread. School closures. Discussions of banning gatherings of 50 or more people.

Friday was the first day some of my friends started talking about the economic impact of the virus. Overnight, hours have been reduced. In addition to the virus there is a economic uncertainly. While most people don’t fully understand whats happening to the stock market. They can readily understand the increased cost of having young children at home. The choices for some families with young children is to find away to pay for increased child care cost or to take time off until the schools reopen.

It been a week, I’m feeling better and for the first time I felt well enough to get a little shopping done. I needed juices and I am down to less than a quarter of a roll of toilet paper. The 19th Street Safeway didn’t seem abnormally crowded. There was plenty of meat, breads, fresh fruit and vegetables. Perhaps Sacramento shoppers are more sophisticated then those other cities, the shelves were full. Normally I go up and down every aisle of the store. On this day, I went directly to the aisle where they sell toilet paper. When I arrived the only thing I could find was a notice that limited shoppers to two packages of TP.

Delta Airlines just announced it was reducing their flight capacity by 40%.  The Travel industry in one week took a major hit in Sacramento and all over the world    In one week, hotel occupancy in Sacramento dropped 60% and it hasn’t bottomed out.

This week, Taxi,Uber, Limousine companies, Lift, drivers, Airline Employees, Rental Car Employees, Airport Employees, Hotel workers, Restaurant employees hours have been reduced  due to virus. These hourly cuts will continue each week until things return to normal. By April 1st, hundreds of Sacramentians may be unemployed. Many losing their health coverage.  While the media focus is on the  CoronaVirus, lost in the coverage are ordinary Americans who will face unemployment due to this crises.  That will trickle down to retail and on to manufacturing. This is what troubles Wall Street. But Wall Street doesn’t have a face.  Its not a server in a restaurant (many will be closed by cities to reduce the spread of the virus)  Its not a bar owner or a person who earns her living working in a Kiosk at Arden Fair.  In China, Italy, France and Spain. Employees and business owners receive modest compensation during these times.  Not in the United States, where their is some talk of bailing out the Airlines and Hotels.

I am a complete idiot.  It’s raining,  I’m wearing the wrong jacket and I’m not wearing a hat.  My nose is running and a small cough has returned.  I’m without toilet paper. My options are wrapping paper or Bounty (the quicker,picker upper).

Governor Newsom, told all residents older than 65 to stay in their homes. He called for the closure of bars, nightclubs, restaurants and wineries. He banned visits to hospitals and nursing homes unless patients were on the edge of death. He announced plans to buy hotels to house some of the state’s 150,000 homeless.

Federal Reserve announced it would cut its target interest rate near zero.

The swifter-than-expected rate cut is designed to prevent the kind of credit crunch and financial market disruptions that occurred the last time the Fed had to cut rates all the way to the bottom, during the global financial crisis just over a decade ago.
The Trump Administration hasn’t inspired confidence in its handling of the Corona Virus.
My colleague hours has been cut twenty to thirty five percent.  My hours may be cut this week.
Please wash  your hands and be careful
CityFella