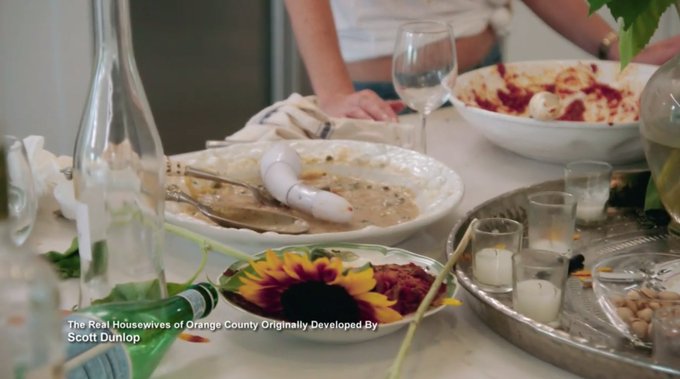 ( no your eyes didn’t deceive you)

Last night’s episode (Season 12 Episode 4) was a complete BLAST.  We’re still in Ramona’s Hampton home.  Several Bedrooms, full size pool and tennis court.   Luann was pissed that she was in the basement guest room.  The former Countess felt she deserved better and went home.   Ramona apologizes and Luann returns to play tennis with Ramona and her tennis pro.

You got to give it to Ramona, who ever she hires is fit and handsome, and the sixty something got game.  The Italian tennis pro “Adriano” is very single but struggle finding someone to date in fast moving Manhattan.  Ramona passes….  Next at bat is Luann, who speaks several languages including Italian moves in.  He notices Luann’s tight body and her skill at tennis and while she flirts, smiles,and speaks to him in his native tongue. Luann swings and strikes out…  He’s not interested.

Were in the Hampton’s…… Sonja calls a couple of traveling dog groomers..Ed and Michael to groom her dog “Marley”.   Flirt-O-Matic Sonja, is an observer this day.  Luann locks on to her target Michael and ask if he needed any help washing Marley?  Micheal tells her he could use her “moral support.   Sonja suggested Michael (clearly a man of many talents)  to give Luann a massage.  Luann is making noises that suggests (he do her in the bushes) and tells him he has GREAT HANDS and then looks deep into his eyes and ask if he makes house calls.  WELL!! after all the fuss about her accommodations, Luann tells Ramona that she wont be staying at her house that evening and leaves early…………………..

Was to go to Ramona friends birthday party in Sag Harbor, but the group convinces her to stay at home for a girls bonding night of dinner and drinks.  DRINKS is the power word here.   As we don’t see anyone sit down for dinner.

Good ole Jeff, escaped what was coming when Leah and Sonja playing on the floor with the toys.

The new girl is a bad influence and I’m here for it.   She’s runs outside and takes off all her clothes and jumps into the pool.  This is Tinsley Mortimer’s third season and we almost nevah, evah, evah! see her without her lashes, no matter how drunk she is.  But on this night Miss Tinsley is topless and in da pool with Leah.

Meanwhile, inside Ramona tells Dorinda that she’s heard her boyfriend John has been flirting with women all over town.

In the pool, Leah tells Tinsley she hates Tiki torches and the next thing you know she is tearing them out of the ground and starts throwing them (with them lit)  Sonja, comes down takes off her clothes and joins Leah in throwing the Tiki Torches.

Ramona’s friend Elyse arrives.  Leah, enters wanting a snack.  Dorinda doesn’t like Leah’s sheerish top where you can clearly see her nipples.  As Dorinda helps her dress in the bathroom we hear….. Dorinda say,   Wait…why are there wings on your vagina?   Because it fly’s Leah responds.

Ramona leaves her party to go to a friends party, leaving mostly drunk people in her home alone.   Luann is gone…  Possibly to get her swerve on.

A fight breaks out in the kitchen with Tinsley and Sonja on one side and Leah and Dorinda on the the other.  The issue is about keeping their ex-husbands sir names. This is an especially sensitive subject for Sonja (who married a Morgan as in J.P Morgan) being called a trophy wife because he was MUCH older than Sonja. Tinsley’s husband family is old Standard Oil Money.

On the other side of the island is Leah and Dorinda who came from humble upbringings and made their own money.   Its so heated that we see Sonja on the toilet peeing with toilet paper in her hands while screaming  “I’m much more that some bitch who married a Morgan.

Maybe Ramona got lucky………   The next morning she walks into her very trashed kitchen and backyard where Leah is still kinda wasted and acting like she has no frigging idea how the backyard and those Tiki Torches ended up all over the place.

Dorinda is not the one!

Ramona is on a tear……She wanted her quests to clean her house.  Dorinda wasn’t feeling it.  Ramona had been ordering Leah to set the tables and wipe down counters all weekend.    Dorinda told her  this is  why you hire someone to do it!   For the last few years the ladies have been staying at her home in the Berkshires and she never expected her guest to cook and clean.   A couple of years ago, Dorinda went to change the sheets in the room Ramona was staying in and discovered that Ramona ripped scones off her wall that weekend.

#RHONY is taken a hard left, with the addition on the newest and youngest housewife.  At 37, Leah Mcsweeny is by far the youngest housewife.  Tinsley Mortimer is 44. Like most of the women, Leah is self made.  She is the CEO and founder of  “Married to the Mob’ clothing company.  Single, she has a 12 year old daughter.

She admits to being a troubled teen, expelled from a Catholic High School.  She had a drinking problems and went to rehab as a youth.  Leah has recently she made the decision to start drinking socially again, while keeping in mind that if she doesn’t keep it under control, she has the tendency to go a little wild

In 2002, McSweeney was involved with a chance physical altercation with the New York Police Department, where she suffered several injuries.After she won a $75,000 settlement from the ordeal, she used the funds as an investment in what would become Married to the Mob. With help from her ex-partner Rob Cristofaro (of Alife), McSweeney launched her own line of feminine Streetware.  Wikipeda

McSweeney has an edge. She’s not concerned about being a socialite, designer clothing, and edicate.  While she and Tinsley are the closes in age.  Tinsely was groomed to be a socialite and married with two point five children and a couple of Golden Retrievers.  I think her alliance will be with Sonja who is free spirited and she will clash with Ramona  who twenty five years older.

Jodi Walker,of Entertainment Weekly writes:  Leah, who is proving to be a shot of adrenaline directly to the heart of this RHONY franchise… Has the has the potential to bring RHONY to heretofore unknown heights  or burn the entire series down to the ground until all that’s left is a pile of ash and one spinning bucket hat.