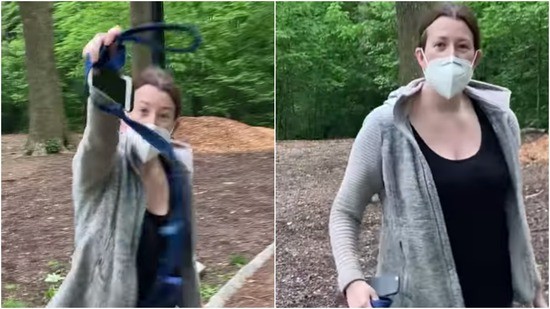 In light of police relations with black men, things could have gone horribly wrong for birdwatcher and Harvard Alum, Christian Cooper.

Perhaps, she was angry because someone told her to leave.  Perhaps she was outraged because he filmed her with his cell.  Perhaps she didn’t like his tone.  All of these might have irritated the average person.   She was in a section of Central Park reserved for Bird Watchers and unleashed dogs were not permitted.

But what she did next, changed her life for many years to come

In retaliation, she told Christian Cooper,she was going to call the police and tell them that there was an African American man threatening her life and she followed through with her promise.

If you are a person of color you are aware of white privilege.

The word of a single”White Man” often hold more weight than the collective voices of men and women of color.   But no one is more powerful than a single white female..  Early on, she learned her most powerful weapon is tears.  A red faced crying white woman can often leading into hand cuffs or some form of prosecution for white men and  persons of color.

White women have been depicted to be the foundation of purity, chastity, and virtue. Their privilege is based on accepting the image of goodness, which is
powerlessness”  As a natural outcome, when there is conflict among women, the norms under which these conflicts are managed are based on White societal norms.

One Asian American and the other White.  How might we assess the situation if we noticed that during this conflict the White woman was crying while the Asian American woman continues to talk without any noticeable change in her tone of voice? Our societal norms inform us that crying indicates helplessness, which triggers automatic sympathy for the white woman.   This often applies to blacks, browns and  people of other backgrounds.   Many people of color are passionate, the intensity and volume increase during differences of opinion.   Some whites are threatened by this what often left out of the equation is their volume and intensity.

The weaponization of tears, can be found in every race however, white women wield a special power.  Throughout the history of this nation, the testimony of a single white woman is responsible for the deaths of many men of color.

In 1994, Susan Smith of South Carolina told the policem her car was carjacked by a black man with her two sons inside. Black men were investigated, many basic rights were ignored all over the state. Nearly two weeks later, she confessed to killing her sons to by letting her car roll into a nearby lake with her sons strapped to their car seats.  She killed her sons after learning her boyfriend didn’t want kids.

White America, the ball is in your court !

If a picture is worth a thousand word, what is a video worth?

There are thousands of videos of people of color being attacked for speaking a different language.  Video’s of whites preventing people of color from entering buildings, neighborhoods, pool’s, gym’s . Average citizens blocking workers of color with their bodies and vehicles from leaving or entering a community until they provide proof of who they are and who they are working for.

Millions have seen the Murder of George Floyd by four police officers Minneapolis.  Millions more has seen the murder of Ahmand Arbery, the jogger in Georgia and there our countless other images of unarmed black men and other men of color killed.

White America have been moved.   Its not to unusual to see more younger white protesters than black.  These are their friends and sometimes family members being killed.

We might have never known the identity of the women calling the police on Christian Cooper.  Had it not been for two people who knew her.  30 year old Kyle Stover used to walk her dog Henry.  “I’ve seen so many video of people being shot or killed for less and that’s terrifying, and like (Amy Cooper-not related to Christian Cooper) either doesn’t understand the wight of her actions or words or she does, both of which are terrible.”

For Lindsey Cork who also walked Henry for M’s Cooper. “If I know a person doing this, and I can identify them, I’m not going to just be quiet. I can’t. It’s against any kind of ethics I have,” said Cork, who outed Cooper on social media.  It was even more personal to Cork because her boyfriend of the last three years, Charles Grant, is black.

Cork said, she never heard Amy say anything racist during their interaction,  “She was a little weird.”  “I just thought she was kind of quirky or neurotic. ”  Cork said ,her conduct on the video warrants a criminal investigation.

White America, the system is broken.  There need to be penalties for people preventing access when there isn’t any visiable threat.  A bill being considered in New York that would make filing a false report with a racial component a hate crime.

We must revisit laws that shield members of the Police from prosecution.  A police officer with several serious citizen complaints such as the officer who murdered George Floyd should have face a citizen review board.   There are other laws that warrant reviews.   Most importantly if you see something say something.  This has to come to an end and to make this happen, we need your voice.

After being outed, Amy Cooper lost her job as a vice president at Franklin Templeton.  Gave up her dog, after people complained she was choking the dog in the video.   If she has friends of color, her relationship with them will never be the same.  When a prospective employer Googles her name, she will be that woman.   M’s Cooper wants the world to ignore her words and insists she isn’t racist.  Perhaps in her thought process, she didn’t call him a nigger.  She seems to be seeking sympathy as her world has turned upside down. She is currently receiving death threats.

On “The View” earlier today. Christian Cooper urged viewers to look at the bigger picture of racism that the encounter displayed.

“It’s not really about her and her poor judgement in a snap second,” he said. “It’s about the underlying current of racism and racial perceptions that’s been going on for centuries and that permeates this city and this country that she tapped into.”

Christian Cooper doubled down on his previous calls to end what Amy Cooper has described as death threats against her. “If you think that what she did was wrong, that she was trying to bring death by cop down on my head, then there is absolutely no way you can justify then turning around and putting a death threat on her head,” he said.