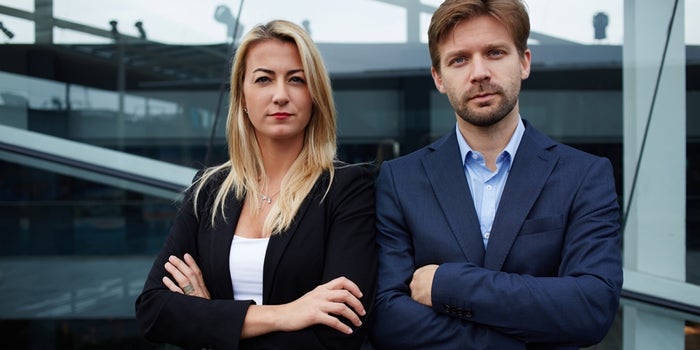 Ever get the feeling that people find you to be cold, defensive, or unapproachable? Or that, your spouse finds you to be combative when you’re simply trying to hear them out? Your body language might be to blame.

You might be sabotaging your personal and professional relationships with an unconscious shrug, arm-cross, or tilt of the chin. Such simple, non-verbal gestures and actions send the wrong signals and turn people off, making conversations difficult and unwittingly alienating people around you.

To help you understand, here are eight actions that speak for you — and say the wrong things.

This can be interpreted as a signal that you’re closed off and not willing to listen to what others around you have to say. Alison Henderson, a certified non-verbal behavior expert in Movement Pattern Analysis, says that the gesture can sometimes have benign origins (you’re cold, you’re sitting in a chair without arms), but can speak volumes because of the stigma associated with it. “The perception is the important part. They may think that a gesture is harmless because they don’ t mean anything by it, but it’s how it’s perceived that becomes the issue.”

2. Keeping Your Chin Up

Holding your head high can give the impression of confidence, but it can also make you appear condescending. This can also be true if a man remains standing while talking to someone who is seated. “The perception is, you’re lording over me or you’re looking down on me,” Henderson says. “And, just aesthetically, because of the Adam’s Apple, accentuating the neck isn’t as flattering anyway!”

Pointing is a pretty common gesture, whether you’re trying to emphasize your statement or gesturing to something on a document. But the fact is, it can come across as aggressive and rude, making the other person feel as though they’re being lectured. And because it’s an unconscious movement, it’s something you should have someone make you aware of. “Then you can sort of backtrack and say, ‘OK, it’s when I’m talking about this or when I reach a certain excitement level,’” says Henderson. “Because you’re proving your point, you usually add weight to the gesture as well, so it comes across as even more aggressive.”​

Sitting with slumped shoulders and your head down conveys vulnerability and weakness and can make people lose confidence in you. “Posture has declined, particularly with handheld devices and all of that kind of crouching and head down and shoulders hunched,” says Henderson. “I tell people to think about their sternum and just lift it like two or three inches. You look more confident, you feel more confident. Any kind of hunched shoulders or roundedness is seen as a weaker position.”

There was a time when this gesture was advocated by body-language experts as making you look authoritative and wise. However, these days, it’s become so commonplace that now, people attempting it look as though they’re trying too hard. “Because it’s been touted for so long and people see it now, they notice it and they say, “Oh you’re trying to be authoritative!’” says Henderson. “It’s perceived as, ‘You feel weak, so you’re doing this gesture to boost yourself up.’”

If you shake hands, don’t put your hand on top of the other person’s. “That’s a big no-no,” says Henderson, “because that’s a power play that shows, ‘I think I’m superior to you.’ If you shake a woman’s hand and you turn her hand under yours, we’re more apt to notice now and think, ‘Oh, OK. Power play. I’ve got your number.’ And immediately the perception has gone down because they think you’re trying to take the upper hand.”

There was a time when this might go without saying, but these days, the compulsion to grab for that device in our pocket sometimes becomes to hard to ignore. But in social or professional situations when your attention is expected, this behavior makes you seem rude, uninterested, and harms relationships. “It makes it seem like you have no interest in what’s going on here,” says Backe. “No interest in this interaction.”

This is an oldie, heavily referenced on Seinfeld, but it remains a key thing to avoid when interacting with other people. “It’s something to be aware of,” says Henderson, “It’s on you to notice. Listen with your eyes and notice when someone has pulled away from you or has taken a step back or needs more personal space. If they’re leaning away from you, honor that and let them have their space.”