London ,In 2020, a devastating virus officially disappeared from the continent it had once ravaged — a remarkable public health achievement that followed decades of work. But you may have missed it.

The eradication of wild polio from Africa in August was hailed as a “great day” by the World Health Organization and celebrated by public health officials.

Still, the overbearing Covid-19 pandemic kept it from front pages and ensured that a near-fatal blow to a deadly disease occurred with little fanfare.

“It doused the massive jubilation, and publicity, and recognition such a milestone deserves,” said Dr. Tunji Funsho, the person more responsible than anyone else for the eradication of wild polio from Nigeria, and with it Africa.

But the moment was “a huge sigh of relief,” added Funsho, whose work as chair of Rotary International’s polio-eradication program in Nigeria earned him a spot on Time’s 100 Most Influential People of 2020.

“Funsho’s year reads like 2020 in reverse; rather than watching a disease spread indiscriminately and freeze the world in shock, he strangled the last embers of a different virus and unlocked huge amounts of human potential. 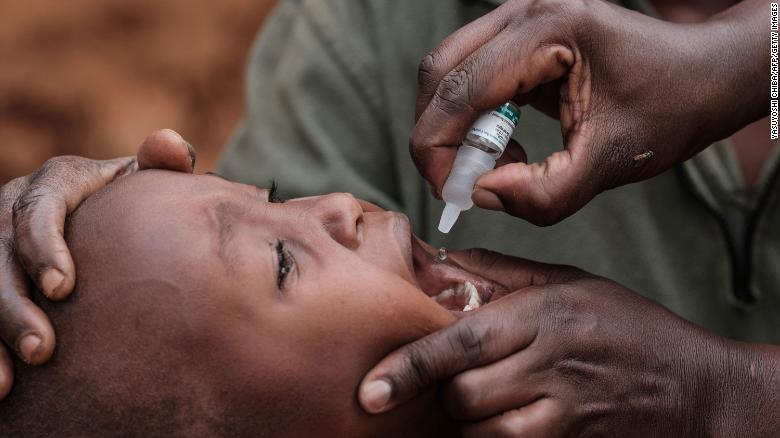 A boy receives drops of polio vaccine in Kajiado, Kenya, in 2018

.But his is not the only achievement to be lost amid the dizzying expedition that was 2020.

Even before Covid-19 existed, humans had an unmistakable and scientifically pinpointed tendency to believe the world is poorer, angrier and more unsettled than it really is; an unconscious desire to hold onto negative stereotypes and ignore the scale of progress unfolding right in front of us

.It’s a habit picked up in childhood and reinforced by media coverage and our own psychological peculiarities, many experts believe. Put simply, we think the world is a bad place that’s getting worse — a sense that undoubtedly grew in the last 12 months.

The only problem? We’re wrong.

“I’m a born optimist,” said Funsho, reflecting on the challenges that his years-long effort encountered: from a Boko Haram insurgence that prevented children in northern Nigeria from being vaccinated against polio, to treacherous terrain that forced his team to travel by motorbike, donkey and camel to deliver shots.

“When the world comes together for one common purpose — to improve the lives of every citizen in the world, no matter where they live — we can succeed in achieving that,” he said. “I was quite optimistic, and proven right.

“Good things continued to happen in 2020, even as loss and isolation spread on an epic scale

.And, according to scores of scientists and data experts, accomplishments like Funsho’s are rolling out constantly in a rapidly improving world. We’re just not paying attention.

‘This is probably the best of times’

“In a world with a lot of problems, you’re kind of banned from talking about good things,” bemoaned Ola Rosling. Rosling is the co-author of a bestselling book, “Factfulness,” which sought to educate people about under-appreciated improvements in global poverty, health and wellbeing.

Rosling is one of a clutch of experts forcing people to think differently about our world. And in 2020, their efforts are particularly poignant.

“Even during years without a pandemic, people are very reluctant to believe that the world is better than it used to be,” he told CNN. “We could improve the world a lot. There are lots of problems,” he admitted. “But I think the main problem is our mindset.”

Changing that mindset has been the mission of Rosling and his late father, Hans. Their 2018 book was hailed by Bill Gates, who paid for any US college grad to buy it for free. And it revealed an alarming human tendency; when the authors asked thousands of people around the world to estimate rates of extreme poverty, girls in education, children vaccinated against measles and dozens of other metrics, respondents systemicallyassumed each measure was worse than it is.

In fact, if the authors had “placed a banana beside each of the three (options) and let some chimps have a go at picking the answers, they could be expected to get one in three questions correct, beating most humans in the process,” Hans Rosling wrote in 2015. 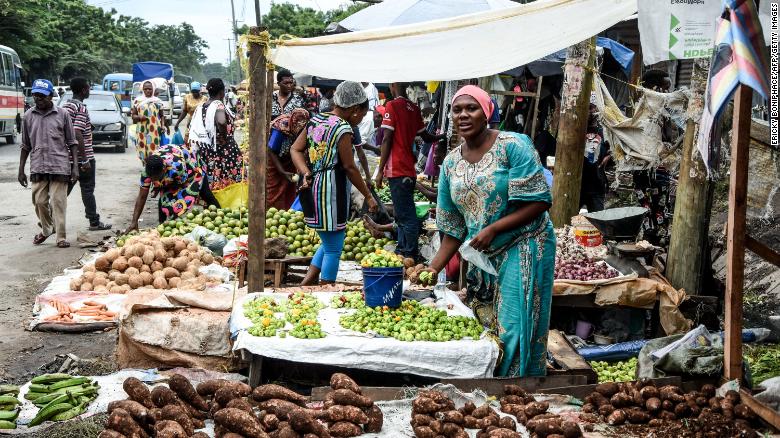 A vendor sells green peppers in Dar es Salaam, Tanzania, in April. According to the World Bank, poverty decreased more in Tanzania than any other country between 2000 and 2015.

“There is no partisan or political divide in this misconception,” Ola Rosling, who now runs the Gapminder organization, told CNN. “In a changing world, systemically, on the left and on the right, people are equally outdated about the world.

“It seems we don’t want to let go of those negative assumptions. In a 2018 study cited by psychologists, including Canadian-American author Steven Pinker, as evidence of people’s ignorance of global improvements, Harvard researchers asked participants to look for different things, such as blue dots, threatening faces, or unethical actions.

These findings suggest that when people are on alert for something negative that is becoming less common, rather than celebrating their good fortune, they may start to find that negative thing in more places than they used to,” he said.

Outdated assumptions are passed down through generations, taught through childhood and reinforced by media coverage of negative, but exceptional, events, Rosling suggested.

And when things get really bad, like in 2020, the human tendency to assume the worst matters. “In our worldview, any huge catastrophe immediately becomes the worst catastrophe ever,” Rosling said.

“The world is in really bad shape, but this is probably the best of times,” he added. “And most people can’t imagine that, because of how our brains are wired.”

Finding positives in a difficult year

Negativity may be a human tendency, but experts say that challenging it can help us put even a year as cumbersome as 2020 in its proper context.

The pandemic, for instance, stalled efforts to solve any number of scientific achievements. But it also covered up a string of accomplishments — and ensured that we spent far more time focusing on a new health crisis, rather than celebrating the fact that others are slowly but surely nearing an end.

One such milestone was clinched by a team of doctors, including virologist Ravindra Gupta, who cured HIV in a person for only the second time ever; an achievement made in 2019 that became public knowledge in March.

“It was really huge news,” Gupta told CNN. “The first time it happened was nearly 10 years ago, and people had not been able to do it again, so people wondered whether this was real or whether it was a fluke.” 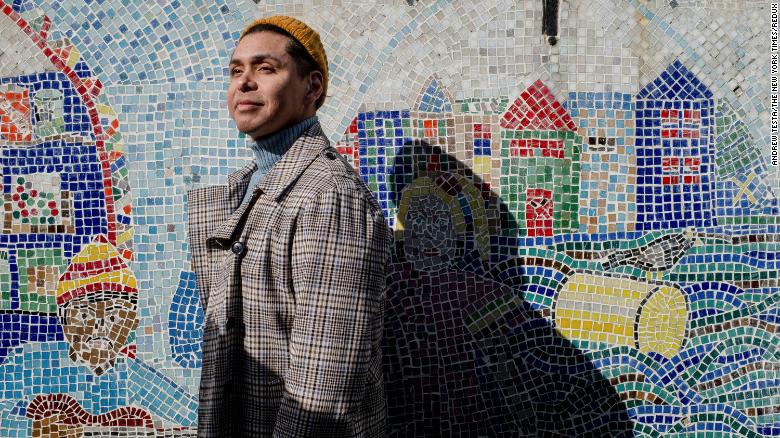 Adam Castillejo, known as the London Patient, in London’s East End in March. Castillejo’s treatment for HIV/AIDs marked a major milestone in the battle against the disease.

“It reinforces hope that a cure for HIV is possible,” said Richard Jefferys, science project director at the US-based Treatment Action Group.

The pandemic also prompted a historically speedy vaccine that rewrote all the rules about how quickly such a shot could be produced.

“I think it is unique,” said David Matthews, a Virology professor at the University of Bristol, of the multiple vaccine candidates to near or reach approval in 2020. “It is important to remember that at the beginning of the year we had literally no idea if any kind of vaccine was possible against SARS-CoV-2.”

“We’re entering a new era of vaccine development,” added Andrew Preston of the University of Bath. There’s even hope that the mRNA technology used for the first time in some Covid-19 vaccines could work against a huge range of other infections, including cancer.

And the crisis also gave rise to a renewed appreciation of scientific work, according to Peter Hotez, dean of the National School of Tropical Medicine at Baylor College of Medicine in Houston. “For the first time that I can remember, people are hearing from scientists directly on a regular basis.

And I think people like what they’re hearing, [about] how we think through a problem, how we make assessments, how we react to different situations,” he told CNN.

“I think that’s a really important and positive development, and one we need to build on.

“Progress begets progress: as wild polio was stifled in Africa, Funsho told CNN his team quickly repurposed their operation to tackle Covid-19 in the region, shielding it from the virus in a way that would otherwise been impossible.

And the crisis may have had even deeper implications elsewhere. “This pandemic helped us see all the actual actors of what we call society — all these people in uniform, who were always talked bad about,” said Rosling. 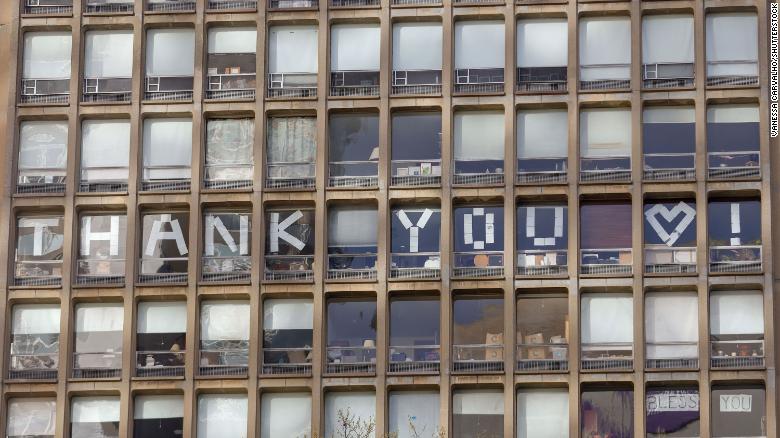 A tribute to healthcare professionals in New York in April.

.”Meanwhile, Rosling is keen to highlight the steady but vital improvements that happened in the background.

“The trends that really form and shape the lives of the future generation are things that never show up in the news,” he said. He cited increasing access to electricity, the decline of mortality in childbirth and progress against diseases such as malaria and polio as sources of light that shone throughout the year.

“To realize how good the world is and how many things are improving, you first have to confront people’s worldview and show them that actually, no, you’re wrong a lot,” he summarized.

“Being aware of the progress makes you realize that the problems you hear about tonight, you hear because we’re going to try to solve them.”

“Problems are for solving,” Rosling concluded. “And we have managed to solve the biggest problems historically.”