If you want to know what’s fuelling right-wing extremism, look no further than Fox News 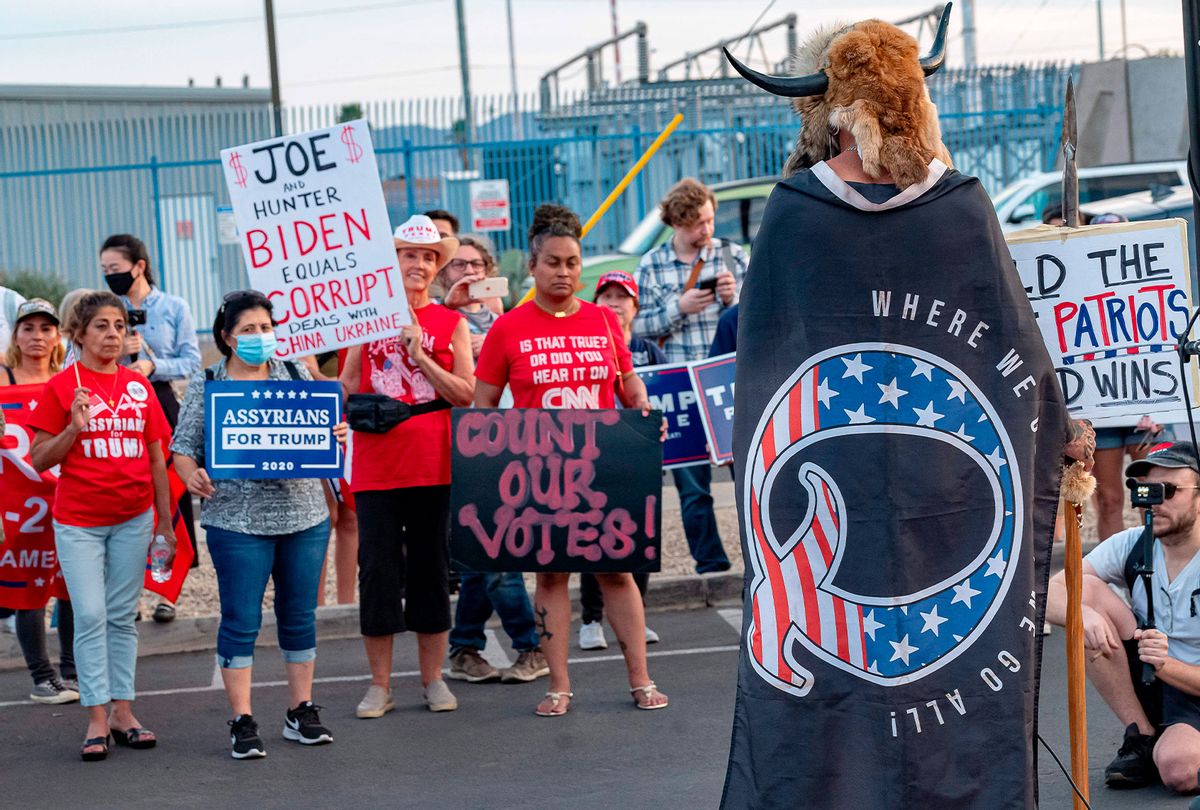 Jake A, 33, aka Yellowstone Wolf, from Phoenix, wrapped in a QAnon flag, addresses supporters of US President Donald Trump as they protest outside the Maricopa County Election Department as counting continues after the US presidential election in Phoenix, Arizona, on November 5, 2020. (OLIVIER TOURON/AFP via Getty Images)

Political analysts are still trying to figure out just what has caused the Republican Party in this country to move so far to the right in recent years, and there are many theories. Much has been made of the Trump-loving white working class’s perceived loss of economic success due to outsourcing and international trade and we’ve endlessly discussed their various grievances about losing the status and privileges they believe they are entitled to. We try to understand their confusion about changing cultural norms and the cascading disinformation that permeates social media. In the end, all we really know is that they are very upset and Donald Trump gave voice to their overwhelming anger and disdain for their fellow Americans.

Last week there was yet another congressional hearing with the top social media executives, this one focusing on the role of their companies in promoting extremism, misinformation, and cyberbullying. Republicans were most concerned about the companies censoring right-wing voices (although interestingly, they didn’t complain much about Donald Trump’s expulsion from all the platforms) and Democrats complained about disinformation and extremism being allowed to flourish on the platforms.

We don’t really know at this point how much of that affected the 2020 election. As Kevin Drum pointed out , we are still awaiting data to tell us just how much people relied on social media for their political information during the election but judging by past analysis of election campaigns, it really isn’t as influential as we might assume. There’s no doubt that Facebook and Youtube and to some extent Twitter can lead people down the conspiracy rabbit hole, and there’s little doubt that right-wing extremism has had a very comfortable home on all those sites. But according to the analysis that Drum cites, TV and talk radio are still where the action is. Fox and OAN and Newsmax may pick up ideas that percolate up through the fever swamps to social media. But really, it mostly goes the other direction.

Journalist Peter Slevin spent some months in Iowa before and after the election to get a sense of what the mostly rural, Republican voters were thinking. He reports in this piece in the New Yorker that basically, they are awash in disinformation and as a result have come to believe that Democratic voters are hardly even Americans anymore. Their own form of “identity politics” has been distilled down to “I am a Republican” in opposition to their enemies.

They believed that Donald Trump was the only person who could control the violent, socialist mob that was threatening their way of life. And they believed everything he said

I met Kimberly Pont, the vice-chair of the Fayette County G.O.P., at a Mexican restaurant in the small city of Oelwein, and asked her what drove local residents to vote Republican. She said, “People could see the news. They could watch for themselves what was going on, when you have a party that’s not going to denounce rioting.” Pont believes covid-19 death figures are inflated, mail-in voting is dangerous, Biden is a “figurehead,” and Harris is unqualified. “I’m terrified,” she told me. “She is the most left-leaning of all the senators.” When I caught up with Pont this month, she told me that the failure by the courts to identify widespread election fraud left her “disappointed and disillusioned.”

Slevin noticed that in every house and business, right-wing talk radio was on in the background and the likes of the late Rush Limbaugh were saying things like this:

None of that is QAnon weirdness or Alex Jones and Infowars. It is standard issue mainstream conservative media, which millions of Republicans listen to every day and watch on Fox News and the lesser cable channels at night.

Throughout the Trump administration, there was an ongoing question about whether Fox News was the president’s brain or vice versa. I came to believe that it was a feedback loop with disinformation coming from both sides. There were numerous examples of Trump tweeting out some outlandish insult or idea just seconds after it had aired on the network. And the Fox News universe was dedicated to ensuring their audience saw Trump as their savior, often cleaning up his misstatements and amplifying his most effective messages to the faithful. They were a team.

Trump has begun to call into the shows again, clearly unable to keep out of the spotlight any longer. He checked in with Laura Ingraham a few days ago and made this stunning comment about January 6th

You will note that at the end he said of “the left”: “they truly hate our country.” That is the message those people in Iowa hear from him and all the talkers on the radio and right-wing cable news.

The question is where they go from here. It’s unknown if Trump will maintain his influence. He intends to, of course, and unless he fades, these blatant lies will continue to be believed by tens of millions of people. He can draw an audience. But he can’t last forever and there’s little reason to believe that his offspring have whatever it is he has that appeals so much to these folks. But one Fox News celebrity is laying out a roadmap.

You’ll note that this is all predicated on the notion that the liberals are making them do it. Carlson is the most flagrant white nationalist of the big-name Fox News celebrities and he gets the biggest ratings, which I suspect is not a coincidence. Before this guest joined Carlson, the host was nearly hysterical about the migrants at the border. He said: You’d think that if you’d caused a crisis of this magnitude that was going to change your country forever, possibly for the worse, you’d feel a moral obligation to learn a lot about it because it’s your crisis. You own it, you did it. But Biden hasn’t.”

A moral obligation to learn about a crisis? This is the same person who backed Trump’s COVID response to the hilt and has been recently pushing anti-vax propaganda.

If you want to know what’s fueling right-wing extremism, you don’t have to dig deeply into obscure corners of the dark web. Look no further than Fox News. It isn’t just a ratings game for them and it isn’t all about money. Fox News is the beating heart of the white nationalist movement in the United States and they are indoctrinating millions of people day in and day out. In fact, Donald Trump himself is one of those people, he just doesn’t know it.

Heather Digby Parton, also known as “Digby,” is a contributing writer to Salon. She was the winner of the 2014 Hillman Prize for Opinion and Analysis Journalism.MORE FROM HEATHER DIGBY PARTON