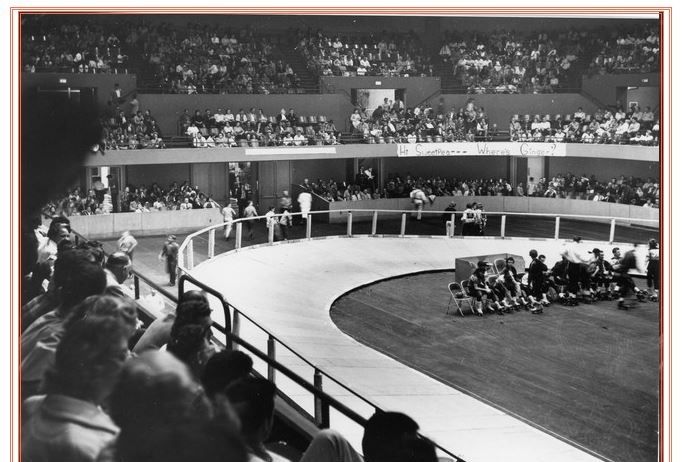 On any given Sunday night at I was planted in front of my TV watching my San Francisco Bay Bombers on channel 2 on Oakland’s KTVU. It was the late 60’s, early seventies.

It was Charlie “O” Connell and Joan Weston against the world.  I hated, Weston’s arch rival Ann Cavello, she was mean and nasty.   During one game, Cavello got me so worked up that I lost my mind and rushed to track, I think I was `13.

During the Broadcast they would announce the Bay Area locations where the games would be held and when and where you could buy tickets.  Yes, back in the old days, one had to go to an outlet Berkeley Community Theater, San Jose Civic Auditorium, Oakland Auditorium, the San Francisco Auditorium and mid week at the Richmond Auditorium.

From the moment my mother bought me that first three dollar ticket, I was hooked.

I was a good kid, responsible. My mother allowed me to go to other Roller Derby games alone throughout the Bay Area.   A/C (Alameda/Contra Costa) Transit was my limo.   The “72 bus, was my main ride, south on San Pablo Ave, to all the venues expect San Francisco, where  I would take the “L” bus to the Transbay Terminal and then a street car to the San Francisco Auditorium (Now, called the Bill Graham Auditorium)    The 72, was cool, as it took you from Richmond , through El Cerrito, Albany, Berkeley, Emeryville to Downtown Oakland watching the various passengers get on an off the bus. From Richmond, most of the passengers where black, and that changed in Berkeley and by the time you arrived in Downtown Oakland, the majority of the passengers were black again.  Sometime I didn’t get home until after 1 am.

After security directed me to my seat at games in Richmond and Berkeley, I needed an outlet for my anger.  One evening a Bomber collapsed on the floor and was carried out. Members of the team were visibly shaken and the game was delayed for about a half an hour.  I didn’t see what happened .but I wanted everyone on the other team to die.

Someone two rows below me, attempted to get the fans worked up by clapping but gave up after a couple of minutes.  So, I took over, and wouldn’t stop until everyone in my section joined me. Before you knew it, the entire auditorium was on its feet clapping and stomping. Throughout the night, if the Bombers needed me, I got the crowd up on its feet, even thought my hands were on fire, my team needed me.   My hands throbbed and burned all the way back home, but it was worth it.

The whole world in my hands

Thirteen fucking years old and I had the power to get 5000 people on their feet!   Hell, this beats an over priced Hot Dog and Soda.

I used to daydream about Charlie O’ Connell and Joan Weston (the Blonde Bombshell), walking into the stands and telling me, that they needed me.

At the championship bout at the Oakland Coliseum, I was prepared to do whatever it took for my team.    It was a tough match, the other team kept distracting the referees and the Bombers were paying the price. Some people recognized me and encouraged me to get the people going.  There were quite a few angry fans rushing the track.   Throughout the night, I had over 15,000 people on their feet.  The game went into overtime twice.  At the end of the night the San Francisco Bay Bombers were victorious.

My palms were red and throbbing, it hurt to get the bus fare out of my pocket. It hurt, to reach into my pocket for the transfer.  The next day they were swollen and I couldn’t pick up a fork.

And entering the track is “CITYFELLA”

For nearly three years, I was obsessed with all things Roller Derby.  I wanted to be a Bomber and I took the bus to where they trained in Alameda.  The building was locked tight and I stood outside for 45 minutes hoping that door would open.

The sport has been around since the 1920’s  There are different variations of the game.  Television expanded the sport.  It was extremely popular on the East Coast.   In the 50’s it was on ABC every week for over five years

Leo A Seltzer is generally credited as the creator of the sport and was the founder and head of the original Roller Derby league from 1935 until his son Jerry Seltzer took over the business in 1958.

Fading in popularity on the East Coast, Leo Seltzer moved the operation to the West Coast, were he could not get traction and decided to shut it own.   His son, Jerry was working as a track side announcer learned a new independent television station was coming on the air in the San Francisco Bay Area and contacted the station about providing the derby as possible programming.

Leo wasn’t interested, but told Jerry that if he wanted to operate the game, he would let him use the track, uniforms, etc, but wouldn’t back the project.

An engineer down the Peninsula had developed videotape at Ampex in Redwood city: suddenly now programming could be taped with very high fidelity and re shown…This was crucial to the future success of the game.

Roller Derby first appeared on KTVU on Saturday night as a live event, with the Bay Bombers skating a studio like game from a former auto repair shop on East 14th Street in Oakland.  And the last hour would be reshown on Saturday morning to reach a different audience, via the new videotape.

The program (later moved to Sunday night) drew fans from all over northern California and games were scheduled in over a dozen cities in the region….and because of demand for the programming in other regions of the county, the videotapes eventually appeared on over 100 stations in the US and Canada, and live games in all major arenas (and major stadiums) drew huge crowds: record setting 19,507 in Madison Square Garden in New York, and over 50,000 at White Sox Park in Chicago.

Because of the gas crisis in 1972 and other issues, the International Roller Derby League shut down in 1973, but videos of the game were now appearing on tapes, and eventually on cable.  And April Ritzenhaler in Texas saw some of these, and with others in Austin formed Texas Roller Derby, a banked track game for women in 2002.  Eventually a group of players broke away to form a flat track game, and the Texas Rollergirls were born…eventually derby spread to many other cities and countries, and today there are approximately 2000 leagues around the world. All traceable to KTVU, videotape,

My focus was cars, girls, and moving out of the Bay Area and going to college. Living in the Central Valley, I watched the LA Thunderbird’s, on “Color TV”, either I matured or these were bad actors. The punches didn’t connect, and it just seem so fake

I remember Ann Cavello punching Joan Weston so hard at the Richmond Auditorium that her helmet flew onto the floor. Referees couldn’t hold Joan back as Ann left the track and I remember the woman behind me screaming and spitting on my neck, “Kill that Bitch Joanie! “