In Towson, Maryland, there is a street called Dunkirk Road. There are 32 homes on Dunkirk, where families of various races, religions, and political views live. The neighbors are all close friends. So when Matt Riggs, who lives on the block with his wife Kerry, found out his neighbor across the street was struggling with depression in December of 2020, he decided to spread some holiday cheer. Riggs, who had been having a hard time himself during the pandemic, hung his Christmas lights early because he needed some joy. He managed to get one of the strands across the street, over a tree, and connected it to his neighbor’s house.Soon, house by house followed, connecting their lights until the entire block was lit. Riggs tells CNN they all did it again this year, with one neighbor making a metal sign by hand that reads “Love lives here.”

“I was decorating for the holidays and I was a little bit early. It was actually before Thanksgiving, but it was such a dark time for all of us. I really didn’t want to wait anymore,” Riggs recalls of last season. “I wanted to go ahead and get things lit up. So, I was climbing the tree and running lights up in my tree and I wanted to see if I could get them to go across the street. And I was so excited when I did get them to go across the street and stay lit.”

That’s where Tom Desert came in. He’s the handy neighbor who soon figured out how to rig one strand after another, making a canopy over the block and planting anchors in each lawn to hold the strands in place.”Once there was a job to be done, Tom came out and he was helping us because it’s really hard. They’re heavy, those lights,” Commisso says. “Tom was able to get our lights up and then we were like, everybody let’s do it. “She says a bunch of neighbors got in the car and “cleared out Home Depot.”

A message of love 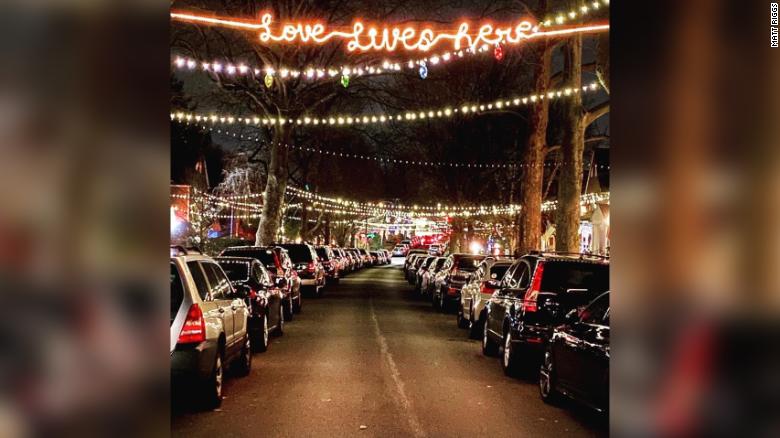 Neighbors connect their holiday lights on Dunkirk Rd. in Towson, MD. The tradition started in 2020 with 32 houses joining in. Neighbor Melissa DiMuzio, decided to add a nice touch. While binging shows on Netflix, she bent wire hangers into a sign that reads “Love lives here.” She wrapped it in lights and Desert helped get that displayed too. “I had missed out on actually hanging my own strand, and I really wanted to participate,” DiMuzio tells CNN. “It was moving to see just like six or seven light strands going across the street. And so I made the sign.”DiMuzio polled neighbors on what the sign should say.”That gave me permission to think outside of the happy holiday arena,” she says. “The last one was love lives here, which is actually on a wooden plaque in my garage that my mom gave me.”Desert says it was a perfect fit.”We have 32 homes on this block and despite the differences in opinions and beliefs, however you want to look at that, everybody here loves one another,” he says. “I think that love lives here is explanatory of how it works on this block.”Commisso agrees.”It is a very special place,” she says “We parent everybody else’s children around here.”This year, the block even added a big mailbox, where kids can leave their letters for Santa Claus to mail to the North Pole. When everything comes down in January, Desert is in charge of that too. “I might have to take a day off to take it down. At least the high ones,” he says. “They are about 30 feet in the air on the highest peaks of the block.”

The neighbor who Riggs was originally hoping to cheer up is doing better these days, he says. The collective light display has lifted everyone’s spirits.”We all suffer that from time to time,” Riggs says. “This time last year she was in a dark place and I was too. I’d applied for and been offered three jobs and they were all rescinded because of Covid and I was just broken and defeated. I think anybody that needs a little light in their life, this would be a great neighborhood to go through.”