From the bureaucracy to driving on the right and a whole new language, there’s a lot to get used to in France. But there are also more subtle social norms that foreigners can at first find confusing. 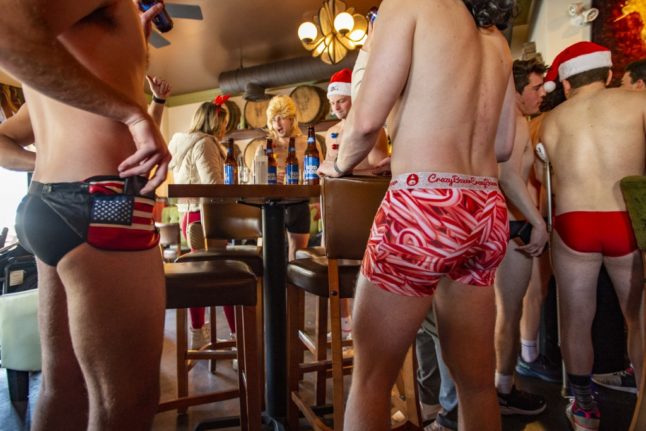 Speedos are not just accepted, they’re compulsory in some French pools. Photo by Joseph Prezioso / AFP

From “The Local ,France”

Here is our selection of some of the key social norms that you need to know about.

People say bonjour a lot in France. Like, really a lot.

It is about more than simply saying hello, it is about politeness and respect.

You will hear people saying bonjour at the shop, at the workplace, in the elevator or doctor’s waiting room, as well as obviously with neighbors or people that you know – a normal day can easily involve 50 bonjours.

If you omit to utter a bonjour, you may be dismissed as rude or snobby.

Complaining is a national pastime in France.

There is almost no limit to the number of damning ‘Là‘ that can be affixed to an exasperated oh-là-là.

Opinion polls routinely show the French to be pessimistic about their future, even when things are going comparatively well.

Various theories have been put forward as to why the French are such a bunch of râleurs: from societal value placed on skepticism and rebellion enshrined since during the enlightenment period and revolution, to a sense of nostalgia for the glory days of De Gaulle and Napoleon Bonaparte.

Disagree with these theories? Feel free to complain in the comments section below.

Many countries practice a version of the cheek-kiss greeting but in France it is highly commonplace – before the Covid pandemic, 91 percent of French people would greet close acquaintances with a bise.

For foreigners this can be a minefield, especially as different regions have their own variations of the greeting, how many times you need to do it and which cheek to start with.

Try not to worry too much though, even French people can find the rules pretty confusing, as the below advert shows. Made during the pandemic to remind people not to kiss, it shows a group of French lads debating whether they are in a three-kiss or a four-kiss region.

Generally, you would only bise with your family, in-laws, close friends or social situations where everyone is doing it and although it is starting to return after being largely forbidden during the pandemic, many people have taken the opportunity to scale it back a bit.

Many stereotypes about the French are untrue, or at least exaggerated, but not this one. France numbers some truly shocking automobilists.

Whether it is tailgating, speeding or clanging other cars while parking, driving is an area where France does not live up to its reputation for sleek elegance.

A 2021 study found that 74 percent of French drivers break the rules of the road and 88 percent said that they feared the aggressive behavior of other drivers – no surprise there.

France routinely ranks high on the list of European countries with the worst drivers – although Italy, Spain and Greece tend to compete for the top spots.

What is it with the French and Speedos?

The skimpy male swimwear item – also known as a budgie-smuggler or a banana-hammock – has been out of fashion for many years in other countries, but in France they are not just popular but compulsory in some places, such as municipal swimming pools, where baggy swim shorts are not allowed.

The French believe it is more hygienic to wear tight-fitting swimwear, a theory that is often met with raised eyebrows by Anglos. But if you want to swim at your local municipal pool you have no choice but to squeeze yourself into a pair. In most pools, swimming caps are also compulsory.

While your wallet might thank you, it can be a little awkward for foreigners in France to get around the idea that tipping is not the norm.

Service staff in France are generally better paid than in most Anglophone countries, meaning they do not rely on tips to make up their income.

Leaving a bit extra for the waiter or waitress is considered a friendly gesture if the service was particularly good, but it’s certainly not expected for every meal.