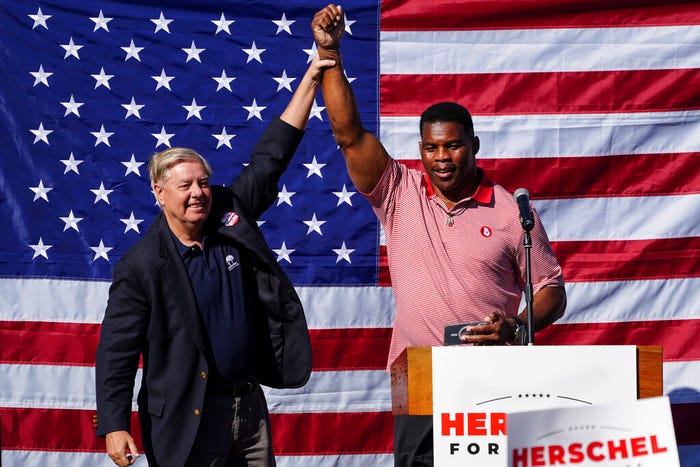 What the hell happened last week.   The forecasts, projections, the well paid political analysis all got it wrong!

It’s the weekend and the Republicans by all accounts,should be popping bottles and the Democrats should wearing black burkas and dragging giant crosses to funeral music though the streets of America.

But the Demos took the Senate and the House could go either way.

Meanwhile, no one wants to take a picture with Donald Trump.  Outside of Melania, who saw this coming?

If only Kevin McCarthy could wipe away stench that came from kissing Trumps ass.  Practice makes perfect. If he wants to be Speaking of the House (and he really,really does) he will need to load up on chap stick.  With a weakened Trump, he is got to kiss a lot of ass to become speaker. There ain’t a lot of love for flip flop Kevin, within his Party. Some members might just f with him just to get that kiss!

THE FUN TIMES AREN’T OVER. “GEORGIA IS ON OUR MINDS”

It’s fun times in American politics. Right now the Gop is crazy town central. BIG MONEY! REAL BIG RED DOLLARS WILL BE SPENT ON ONE THE WORST SENATORIAL CANDIDATE IN THE HISTORY OF WAKANDA!!!

The Democrats have control of the Senate. What’s at stake are the courts. One more Democrat will insure that they can place and Judge they wish.

For one more month we get to see Mayberry’s Barney Fife aka  #Herschelwalker fake police badge. (Sorry, Mayberry and  Barney Fife)  We may get to meet another child he forgot that was his.   More Hallmark cards and denials of abortion paid for.  Its one thing when its one person accuses you and another when 25% of the women in the state comes forward.  (kidding?! I’m a kidder) one thing we know is Walker is a GENEROUS MAN.  He gives the woman enough money to pay for the abortion and enough money left over to supersize her order and one lucky friend at McDonald’s.

There’s Crazy, then there is KRAZY. Followed by ABSOLUTE MADNESS. This time in the form for brown nose Lindsey Graham.

Crazy:On Thursday, brown nose on Fox’s Hannady said If Democratic opponents of Walker were able to derail the former NFL player’s Senate Dec. 6 runoff campaign against incumbent Sen. Raphael Warnock, then it would discourage younger minorities who largely back Democrats from embracing a conservative message.

KRAZY: “Here’s the most important point I’m going to make tonight. They’re trying to destroy Herschel to deter young men and women of color from being Republicans,” Graham said. “If they destroy Herschel, it will deter people of color from wanting to be a conservative Republican because you just have your life ruined. We cannot let that happen. We need to have his back.

ABSOLUTE MADNESS: If Herschel wins, he’s going to inspire people all over Georgia of color to become Republicans, and I say all over the United States. Herschel Walker is a nightmare for liberals. He’s an African-American conservative. They have belittled him. They have treated him like crap … his family,” “Stand by Herschel tonight. If you can give, give. If you know somebody that can give, ask them to do it. The conservative movement for people of color is on the ballot in Georgia. We must help people like Herschel for the benefit for our country and the future of conservatism.

South Carolinian’s this is your senator and we are real sorry for your continued embarrassment. Its time to starting looking for a Senator who possesses an original thought that’s not inspired by Donald Trump. Perhaps a quiet discreet retirement home for closeted Senators is in order. Note: (Closeted Senator) These are just unsubstantiated rumors. At 67, he just haven’t met the women who shares his tastes in black men.

We are likely to see some major rumblings within the #DemocraticParty in 2023. Especially after Mama leaves.

Its a time of disruption and confusion in #American politics.   Some trace the disruption within the Republican to #DonaldTrump. I believe it happened long before.

Politics has long been about status and power. It was alleged, speaker #NewtGingrich shut down the entire US Government because he didn’t like the seat assignment on #airforceone during the #Clintonadministration.

Petty? I never met her!

Long before Donald Trump. Some members of #RepublicanParty complained about the direction of the party. Constituents complained they were being ignored.   Enter the #Teaparty.  A group of Republicans who were more focused to the direction and its needs of the constituents than being reelected.  HOW DARE THEY!    Creating a civil war within the party.

Donald Trump’s unconventional candidacy exposed the cracks within Party, confirming what members of the Tea Party all had long believed. Flawed, Donald Trump travels to small rural areas energized the base in a way no politician has since  Roosevelt.  These visits didn’t directly generate votes. It did generate an allegiance to Donald Trump.

Unable to counter this powerful allegiance. Influential members in GOP turned their focus to preserving their personal power-base over the needs of the party.

Doors wide open and monitored. Allowed the #MarjorieTaylorGreen s to enter and fringe Republicans like #Alexjones to flourish. These unconventional candidates question the sensibilities of many proud Republicans.

I’m an equal opportunity abuser. There are major flaws within the #Democratic party. The difference between the two is Leadership.  Mama #NancyPelosi s hand is firm and unwavering. She has her thumb on the house.   However, she is a mother first. No matter what direction the house goes.   2023 is likely to be her last year.
Mama Pelosi is a mother first.  The attack on her husband of many decades, just maybe the last straw.

There has been trouble, bubbling below the surface of the #Democrats for many years now. The huge wave of 2020 of diverse politicians has created many new voices in the party and it will require a respected politician with a patient hand. Currently, I’m not sure there is one.  At a time the party needs it most.

The Republicans are good when they have the ball, horrible when they don’t.  After all the gerrymandering, all the voting restrictions, the midterms proved, the party desperately needs Leadership and its not likely to happen under McConnell or McCarthy.

The Democrats are horrible when they have the ball.  They fumble it, turn on each other. The leadership is or was solid. I believe the house will be a free for all without Mama Pelosi. The good news. the Senate under Schumer appears to be solid.
,
Many questions remain. The Republican are imploding. The midterms indicate the party is out of touch with most women under 50. (Roe) Out of touch with people of color. Out of touch with educated Whites. Out of touch with nearly every group except Evangelicals over 50, whites over 50 in rural America. This midterm revealed Donald Trumps impact on the party. The fringe candidates had a negative effect to the party. The question which influential members of the party can silence the noise from the existing fringe and control the leakage. Can all theses issues be addressed in one years time?

Newly elected members to the House aren’t pleased with the status quo within the Democratic Party. The cries of “be patient your time is coming” is fading fast. The Modern Progressives like Elizabeth Warren and Alexandria Ocasio Cortez vs Conservatives like Jared Golden and Joe Manchin. As of today, 2024 is President Biden’s to lose. But there is trouble brewing.

See ya next fall.